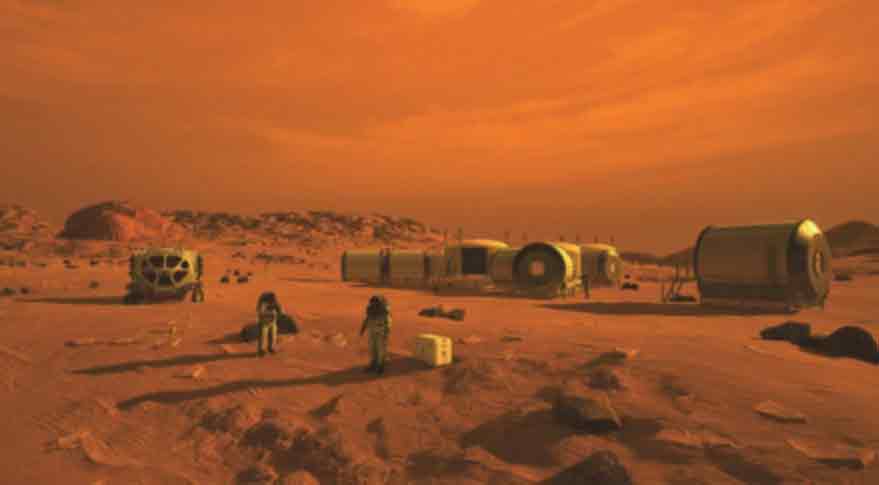 In 1969, American astronaut Neil Armstrong took a big step for mankind and became the first astronaut to set foot on the moon. More than half a century later, another space race is heating up. This time, the new frontier that holds the hope of the people on earth is reaching Mars.

This topic can also be regarded as an eternal motif of human science fiction works, representing imagination of the future.

After all, mankind has lived in the cradle of the earth for too long, and the earth’s environment is gradually deteriorating. People realized that they “cannot live in the cradle forever”.

With the gradual deepening of Mars exploration and a more intuitive understanding of this planet, humans have increasingly discovered that Mars is too similar to the Earth. Mars, the red planet in the solar system, is the “twin sister” of the earth.

If someone asked during the 90s: “What is the hot news in 1996?” Without thought, the answer was: “Scientists have discovered that life exists on Mars.” This sensational statement or news has indeed flooded the major TV channels and newspapers for a while. The idea that there may be life on Mars has fascinated many people. This gave an idea to the optimistic scientist, that we can migrate to Mars, and start a Mars civilization.

Unmanned missions to Mars in the past few decades have returned a lot of information, including the existence of water in the form of ice on Mars, which makes it even more convincing that humans can land on Mars. But Are we ready?

NASA plans to send humans to Mars sometime in 2030. The UAE’s “Hope” Mars rover is currently orbiting Mars, and the country is propagating its 100-year Mars colonization plan.

Of all Mars landing plans, the most ambitious is probably the billionaire Musk. The SpaceX founder wants to send humans to Mars within this decade. In an interview last year, Elon Musk said that he is confident of carrying out a manned mission to Mars in 2026. However, many scientists have warned that many unknown problems are facing deep space trekking. Musk also acknowledged this risk, saying that it is “difficult to sled over there”, but the living on mars project is still on.

Has There Ever Been Life On Mars?

Although most of the surface of Mars is composed of dunes, stones, and sandstorms that occur all year round, no one can guarantee that there is no life on Mars, especially whether there has been civilization before or not. In 2018, the European Space Agency found that there is some evidence that indicated that there was life on mars before. A liquid underground lake and this discovery not only proves that there is liquid water on Mars, but it also reminds many people whether there is life on Mars, because, in our human cognition, water also is the origin of all life, and life possesses where water is found.

Until 3 billion years ago, the surface of Mars was covered with water, similar to the Earth. However, Mars is now barren and dry, so Martians do not exist except in science fiction.

Researchers have long been thinking about what happened to the water on Mars. Previous studies have shown that after the Martian magnetic field collapsed, some of the water on Mars was sucked into space.

In various science fiction movies, humans regard Mars as a destination for emigration to space. In reality, with the vast starry sky, human beings are scrambling to choose Mars as the detection target.

NASA scientists also insist that the human faces and pyramids found on Mars are real, and the section where Matt Damon successfully planted potatoes on Mars in the science fiction movie “The Martian” is even more deeply rooted.

While some people, take it as a matter of fun and make funny riddles out of it, one of the famous riddles of Mars is, “Why Are There No Living Cats On Mars”, the answer to this riddle, is as funny as the question, it says, “because cats died of curiosity”, so cats can’t live on mars. Here the “curiosity” is related to the decades-long searches going on, to find life on Mars.

Since the rise of modern astronomy, mankind has been marching on the road to Mars. Mars has always been called the brother planet of the Earth because Mars is very similar to the Earth in both the composition and appearance of the crust.

Scientists also believe that Mars may be the next planet to migrate. Therefore, the exploration of Mars has never stopped.

Why Mars Can Be Our Habitation?

In the history of human exploration of the universe, why does it always seem to have a soft spot for Mars? A relatively simple and direct answer, it is just like our earth.

On the whole, among the major planets in the solar system, Mars is closer to the earth, easier to reach, and the conditions are relatively better.”

Although Venus is closer to the earth, the environment is too harsh, and so it does not get the attention like Mars.

Similarities Of Earth And Mars

The reason why Mars has become the first choice for human space migration is first that it is in the habitable zone of the solar system with the earth, and it is one of the neighbors relatively close to the earth. Not only that, after many years of human exploration and research on Mars, we found that Mars has a lot of similarities with the earth.

Like the Earth, Mars also revolves and rotates. A day on Mars is 24 hours and 37 minutes. It has almost the same day and night rotation time as the Earth. The sun seen on Mars also rises in the east and sets in the west. The inclination angle of the orbital plane of Mars and the equatorial plane of Mars is 25.19 degrees, which is very close to the inclination angle of the earth 23.5 degrees, which makes them also have the four seasons of spring, summer, autumn, and winter.

Like the Earth, Mars is mainly composed of silicate rocks and has a solid rock surface similar to the Earth. It belongs to the family of “terrestrial planets”, which is undoubtedly the most solid foundation for the human homeland. The soil and rocks of Mars are rich in minerals and various compounds, which are also the basic components of life.

Of course, although Mars is very similar to the Earth, the currently known Martian environment is far from meeting human survival needs. For example, the Martian atmosphere is too thin, the oxygen content is too low, and the temperature difference between day and night is too large.

On the other hand, humans’ understanding of Mars is still “superficial”. Since the 1960s, humans have begun to launch probes to Mars and embark on a journey of exploring Mars. Cruelly, the success rate of the Mars exploration program is less than 50%. Despite repeated setbacks, the Martian dream has never been lost, and the pace of exploration has never stopped.

How To Return To Earth?

Unless you just want to go and never return, humans who land on Mars need to take a rocket to return to Earth. Scientists said that how to find fuel to drive the spacecraft back into space will be the biggest technical obstacle facing quasi-Mars explorers.

One potential solution is to use resources on Mars to make fuel. First, electricity is used to separate water from underground ice and water-bearing rocks, and then hydrogen and oxygen are mixed to make rocket fuel.

Optimists believe that scientists will solve these problems, but currently, it is not a place where we can live.

The Spooky Reality Of Actually Living On Mars

However, behind the lofty vision of moving to Mars, there are many daunting challenges that people cannot see-unless our brains and bodies are fundamentally adapted to the Martian environment, the planet will never be controlled by humans.

If you are accidentally exposed to a vacuum environment, the pressure difference between the inside and outside of your body will distort your internal organs (such as a ruptured lung), your skin will be sunburned by cosmic radiation, and the water in your muscles will evaporate and cause dermal tissue to swell and appear bruises. The moisture in the nose, eyes, and mouth will also begin to evaporate and cause frostbite.

In addition, the gravity of Mars is 62% less than that of the earth. Not only will health be affected, but human fertility might also drop to zero.

However, despite the existence of these unsolvable problems, it still does not prevent the public from embracing the Martian dream, and even feel that we will soon go to build a colony. SpaceX CEO Musk predicts that a Mars colony can be built in the 2050s with his Living On Mars Project, and the United Arab Emirates aims to have a Martian city with 600,000 inhabitants in the next century. Lewis Dartnell, an astrobiologist at the University of Westminster in the United Kingdom, believes that 50 to 100 years later, Humans may live a self-sufficient life in Martian towns.

Well, the question How Close Are We To Living On Mars, is still a theory, and nothing can be said on a factual basis, with a guarantee. Although we must go to Mars with everything we can do, and build one or two bases is not an exaggeration, the concept that we will soon be able to build a Martian colony for hundreds of thousands of people is just fascinating.