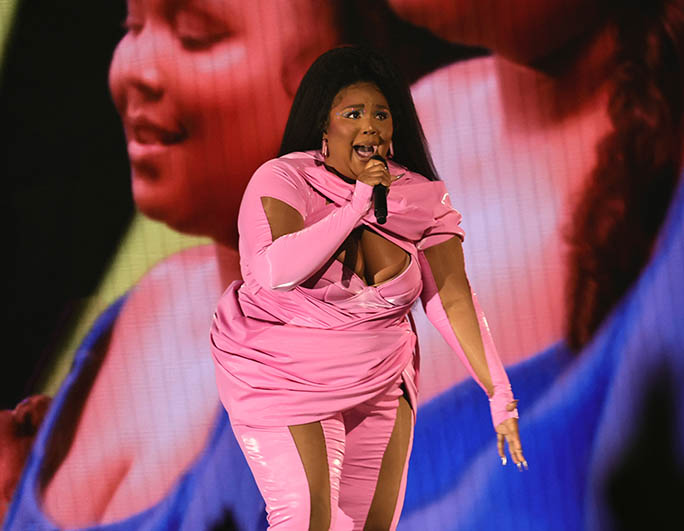 Lizzo brought the house down with an epic performance at the 2022 MTV Video Music Awards held at the Prudential Center in Newark, NJ on Sunday night. The chart-topping singer delivered a stellar rendition of her hit single, “About Damn Time” and even gave her fans a taste of her new song, “2 B Loved (Am I Ready).”

Lizzo had the audience singing along as she danced onstage in a custom bubblegum pink Rey Ortiz ensemble set against a backdrop of dozens of miniature Lizzo’s. The “Truth Hurts” singer looked pretty in a pink top that had a plunging criss cross neckline, mesh panels on the sleeves and ruched hem.

The multi-hyphenate entertainer teamed the top with matching leggings that featured the exact same mesh panels on the thigh. Lizzo styled her hair in a high straight ponytail and kept her accessories minimal.

Sticking to a monochromatic aesthetic, Lizzo completed her look with chunky combat boots. The silhouette had several straps along the ankle with glittering buckets and sat on a thick outsole.

Lizzo had an incredible night at the annual ceremony. After delivering a powerful performance, she took home the Video For Good Award for her hit song, “About Damn Time.”

The “Good As Hell” artist appeared onstage in a black gown from Jean Paul Gaultier’s Fall/Winter 2022 collection. The collection featured puffy ringlets on the sleeve, a dramatic cone bra and curved hem.

The 2022 MTV Video Music Awards were held on Aug. 28 at the Prudential Center in Newark, NJ, hosted by Nicki Minaj, Jack Harlow and LL Cool J. Minaj was notably recognized with the event’s Vanguard Award for her contributions to the music industry, while the Red Hot Chili Peppers were given the Global Icon Award. The 2022 Awards also included performances by Blackpink, Anitta, Fergie, Panic! At the Disco, Lizzo and Maneskin. This year’s awards were led by Jack Harlow with 4 wins, including Song of the Summer, as well as Taylor Swift, who won both the Video of the Year and Best Longform Video Awards.