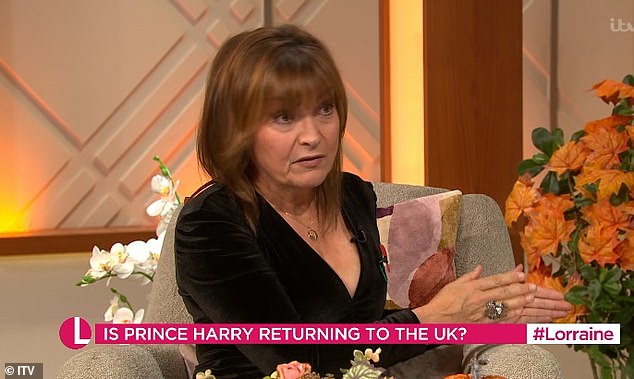 Lorraine Kelly admitted she couldn’t believe the cover for Prince Harry’s memoir, Spare, was real and assumed it was a hoax when she first saw it.

The presenter, 62, was discussing the Duke of Sussex’s explosive upcoming book on her show today, which is set to be released on January 10, when she told royal commentator Russel Myers she thought the cover was a ‘cruel’ hoax, before she realised it was the real deal.

Myers revealed he thought the cover and its controversial title Spare – in reference to Prince Harry being second to his older brother the Prince of Wales, 40, who is first in line for the throne – was ‘a meme.’

It comes as royal experts have claimed Harry could travel to the UK to promote the autobiography, which could see retaliation from the palace, including stripping him and his wife Meghan of their Sussex titles.

Lorraine Kelly said she couldn’t believe the cover for Prince Harry’s autobiography, Spare, was real on today’s show and that she thought it was ‘somebody being cruel’ 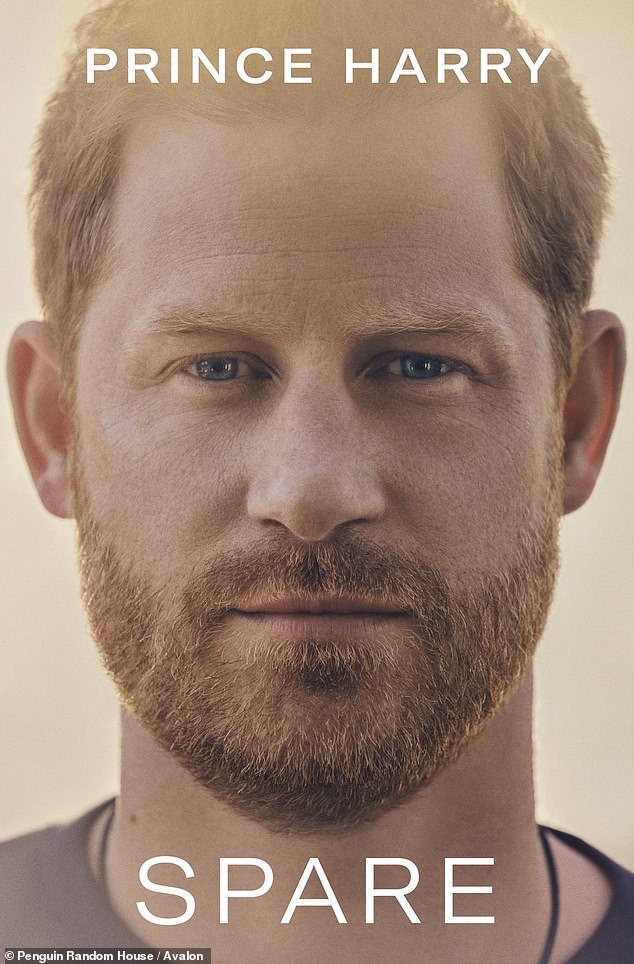 The presenter, 62, was discussing the Duke of Sussex’s explosive upcoming book, which is set to be released on January 10, pictured, when she told royal commentator Russel Myers she thought the cover was a ‘cruel’ hoax, before she realised it was the real deal

Speaking of what she thought when she came across the controversial books cover, Lorraine said: ‘I thought that was somebody being cruel.

‘I saw it and felt ‘that’s a bit mean to do that” and then went: “oh my god that’s the actual book”.

Talking about the term, Myers, who thought the book was a ‘meme’ said: ‘he always thought it was a bit of a slur that he wasn’t comfortable with it and yet here we are, it will be the title of his long awaited memoir.’

Speaking of the Duke and Duchess of Sussex and the rumours they could lose their titles over the book, Myers added: ‘Harry and Meghan seem to have a knack at marketing themselves as royals. 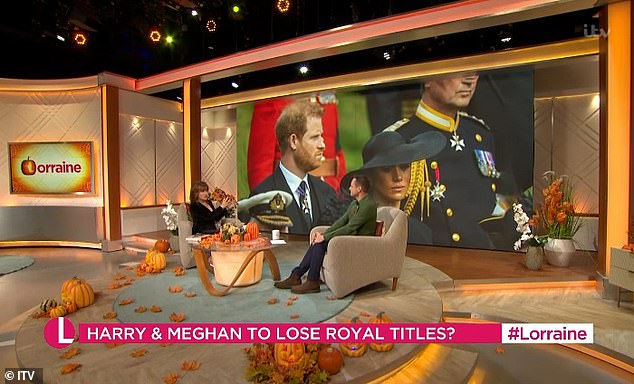 Talking about the term, Myers, who thought the book was a ‘meme,’ said that Prince Harry always thought it was ‘a bit of a slur’ and yet used it as the title of his memoirs

‘They still need to be involved with the royal family, but not. They want to be in an out.

‘We saw them over the UK unfortunately for the Queen’s funeral. Will we see them again? Your guess is as good as mine,’ he said.

Senior royals are said to be bracing themselves’ for the publication of the 416-page title on January 10. Biographer Tom Bower has warned the memoir’s reception will be a make-or-break moment for the Sussexes.

‘Put it this way, it’s not going to make for a relaxing family Christmas,’ a source told the Mail on Sunday. 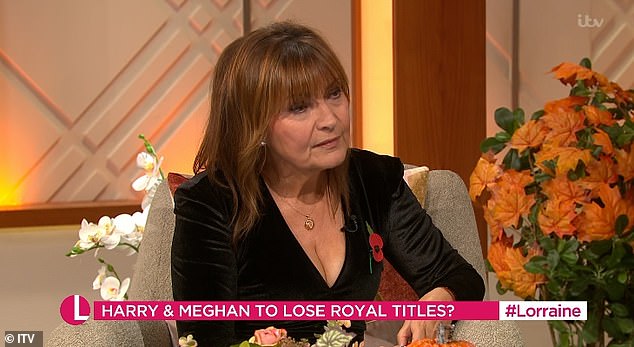 It has now been claimed that Prince Harry had to submit his book more than once before it was accepted by publishers, sparking fears that it was ‘sexed up’ with revelations about the Royal Family.

Prince William ‘has barely spoken’ to Prince Harry since news broke of his brother’s memoir Spare, royal experts have said.

The Royal Family are also apparently on ‘tenterhooks’ to read the memoir, which is to be released on January 10, and have lawyers ready.

Prince William, 40, has barely spoken a word to his brother Harry, 38, since the news of the book broke.

Billed as a work of ‘raw, unflinching honesty’, the controversial book will be called Spare – a ‘loaded’ reference to his position as the younger brother of the heir to the throne.

Royal author Angela Levin said she thought the palace were on ‘tenterhooks’ for the book’s release.

‘They have lawyers ready to read it but they won’t see it until it’s out. If it’s too bland it won’t be worth the millions they’ve already paid him,’ she told The Sun Online.

Details of the bombshell book were revealed and publisher Penguin Random House’s description read: ‘With its raw, unflinching honesty, Spare is a landmark publication full of insight, revelation, self-examination, and hard-won wisdom about the eternal power of love over grief.

‘Spare takes readers immediately back to one of the most searing images of the twentieth century: two young boys, two princes, walking behind their mother’s coffin as the world watched in sorrow—and horror.

‘As Diana, Princess of Wales, was laid to rest, billions wondered what the princes must be thinking and feeling – and how their lives would play out from that point on.’

Family members were not informed of the title of the book before the announcement yesterday, while the Spanish language version is even more pointed, having been given the subtitle En La Sombra, or ‘in the shadow’.

The publishers of the delayed memoir have made it clear that Harry will not shy away from sensitive subjects, such as the family’s decision to encourage him and his elder brother Prince William to walk behind their mother Diana’s coffin.

He could also reveal which member of the monarchy he claims made a racist comment about the potential skin colour of his then unborn son Archie, or shine a light on his strained relationship with his father and troubled times with William.

The brothers have had a troubled relationship since Harry moved to the US with his wife Meghan Markle.

A source told The Sun: ‘The book has been back and forth between Harry and [ghost writer] JR Moehringer and the publishers a few times. They wanted more than was in the first draft, and then Harry wanted to refine things after the Queen passed away.

‘But there has been extra to-ing and fro-ing that people don’t know about. This is because the publishers wanted more areas covered and more detail on some things that were already included.

‘There is a real concern that that means Harry has had to sex up the book and include revelations that even he might not even be that comfortable with.’

It is now reportedly feared that Harry will expand upon a claim made to Oprah Winfrey that a family member questioned what the skin colour of his and Meghan’s son Archie would be.

Publishers Penguin Random House say the book is written with ‘raw unflinching honesty’ and is expected to contain explosive new material addressing Harry’s childhood and his rift with ‘The Firm’ after meeting Meghan.

A source added: ‘The book is much worse than people think.’

Bower told The Sun: ‘This book is really make or break. I imagine that King Charles has been warned that any retaliation won’t be pretty.

‘All that King Charles can really do is to withhold the titles for his grandchildren Archie and Lilibet. Ultimately, I suppose, he could take away Harry and Meghan’s titles as well, but that’s pretty drastic.

‘I don’t know what else he can do. If it is as bad as I think it is, then Harry and Meghan have gone fully rogue.’

He added that the best thing the royal family could do in this scenario would be to ‘break ties’ with the pair.

The title is presumed to refer to Harry being the ‘spare’ to Prince William’s ‘heir’ but has been translated to sound more ominous in other languages.

In Spain it will be called In The Shadow, in Sweden The Other, and in Denmark, The Reservist.

Harry will narrate the audio version himself, but voice artist Emily Woo Zeller warned: ‘To take words off a page and make them sound like dialogue is a skill. I don’t know if Harry has that skill.’

Another source close to Prince Harry told the Telegraph last night that the Duke of Sussex wrote his controversial memoir for himself, rather than being a ‘takedown of his family’.

It was described by those familiar with the manuscript as a ‘beautiful read’, that readers from all walks of life will identify with.

The experience of addressing his past struggles is said to have been cathartic for Prince Harry.

The source said: ‘You can’t always live your life trying to make your family or your siblings happy.

‘You have to choose your own happiness.’

It comes after it was reported on Friday night that Prince Harry will not return to the UK to spend the first Christmas since Queen Elizabeth II died with his family amid the controversy.

Sources close to the couple told The Mirror relations between Harry and wife Meghan and the rest of the royal family are ‘near rock bottom’ and they could decline an invitation to spend the festive period with Harry’s family.

It had been hoped that relations would thaw somewhat after the Queen’s death, but sources told The Mirror that the couple have ‘no plans’ to travel to the UK for Christmas.

The rest of the royal family were reportedly surprised at the memoir’s title.

An initial release date had been pencilled in for ‘late 2022’ to capitalise on the lucrative Christmas market, but the book will not be on the shelves until January 10 – said to be as a mark of respect following the death of the Queen, and, it is rumoured, due to last-minute alterations requested by the duke.

A spokesman for the King declined to comment on the book. But it is understood that the Royal Household has already been warned that the 416-page, £28 book is ‘critical of everyone and everything’ and they are ‘dreading’ it.

The memoir has already topped Amazon charts in the UK and US, as well as reaching the second spot in Canada, despite publication still being several months away.