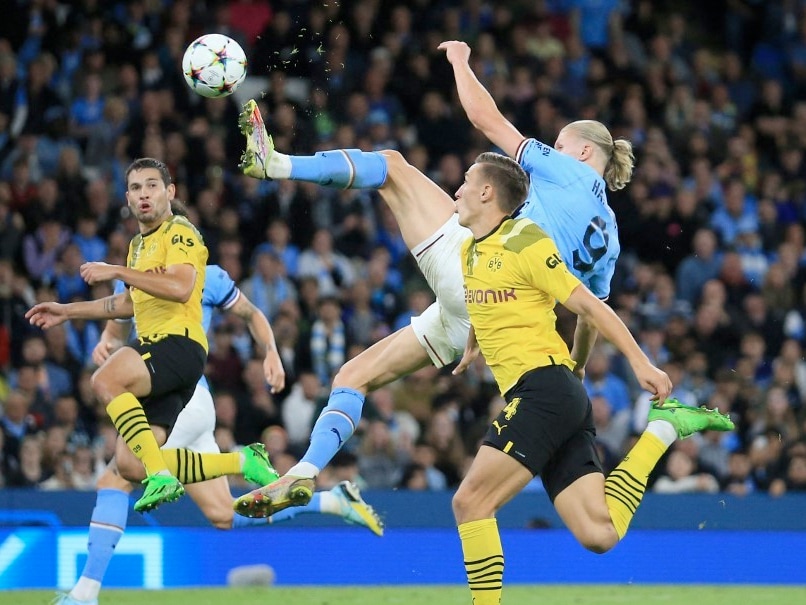 Erling Haaland continued his hot streak in front of goal as his stunning acrobatic finish resigned his old team Borussia Dortmund to a 2-1 defeat at the Etihad on Thursday in their Champions League Group G match. Haaland, kept quiet for large durations of the match, scored a magnificent volley, rising high to meet a cross from Joao Cancelo before back-heeling the ball into the net in the 84th minute to complete Manchester City’s comeback after going down in the 56th minute.

The celebrations from Haaland were muted against his former club, but his goal left teammate Rodri stunned as he held his head in his hands in disbelief, while Cancelo was seen passionately celebrating the winner.

“Everyone knows how important a person Johan Cruyff was in my life. As a person, educator, mentor, everything,” Guardiola said after the match.

“He scored in Camp Nou an incredible goal against Atletico Madrid (in 1973) that was quite similar. The moment he (Haaland) scored, I thought of Cruyff,” the former Barcelona boss exclaimed.

Pep Guardiola is so right

Here’s one from the archives

Guardiola also compared Haaland with the iconic Zlatan Ibrahimovic, who has scored some amazing goals of his own, for his athleticism and flexibility.

“I remember my dear friend Ibrahimovic had this ability to put his leg on the roof,” Guardiola said.

“Erling is quite similar. He’s elastic, flexible and after has the ability to put it in the net. He’s so big, but has this natural flexibility.”

Borussia Dortmund took a shock lead at the Etihad when Jude Bellingham headed home from a Marco Reus cross just 11 minutes into the second half.

Midfield maestro Kevin De Bruyne, however, set up John Stones for the equaliser in the 80th minute and four minutes later, Haaland ensured that City were going home with the three points.

Haaland, who moved from Dortmund for 52 million pounds in the summer, has hit the ground running for his new club, scoring 13 goals in nine matches so far.

City, who are second in the Premier League currently, are top of Group G in the Champions League with six points from two matches. Dortmund are second, with three points.