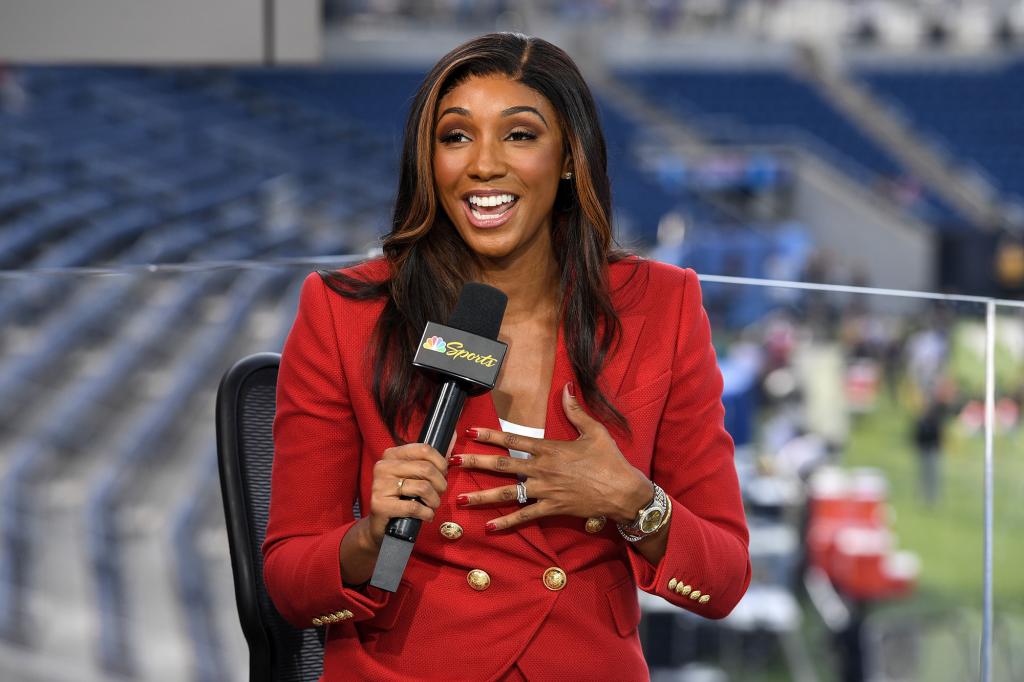 Maria Taylor is returning to college football, The Post has learned.

NBC plans to use Taylor as its studio host on Saturdays for its forthcoming Big Ten package this fall, according to sources.

Taylor will continue to lead “Football Night in America” on Sundays. Taylor helped make her name by being a part of ESPN’s iconic “College GameDay” and being a top sideline reporter for the network.

Get plugged in on the latest in sports media

She left for NBC in the summer of 2021 after the imbroglio with Rachel Nichols over hosting the NBA Finals and Nichols’ privately recorded comments about race and gender issues at ESPN.

For NBC, Taylor also has been featured on Olympics coverage as a host and reporter.

NBC’s Big Ten package will be in prime time next year. The conference will program its top games in a relay from Fox Sports (noon) to CBS (3:30 p.m.) to NBC at night.

Fox Sports’ lead World Cup play-by-player John Strong is not its best option. No. 2 Ian Darke is better — his calls are bigger and more precise than Strong’s. Strong is good enough to do World Cup games, but he doesn’t have as much command of the matches as Darke does, sometimes relying on empty commentary such as at halftime, when he says 45 minutes were played and there are 45 more to go. It’s not terrible, it just doesn’t add anything. At one point, Fox tried to make Gus Johnson its lead soccer play-by-player, which we knew from the start wouldn’t work out because you have to live the sport to call the top games. What is next for American soccer broadcasting is when you hear up-and-coming young play-by-players such as Ryan Ruocco, Adam Amin, Jason Benetti, Joe Davis and Noah Eagle calling the games. None of them may have the sport running through their veins, which is a requirement. You need the passion, which Strong does possess. … For anyone on a broadcast, we judge what they say by whether they are advancing the broadcast enough. Jenny Taft, Fox’s top soccer sideline reporter, has not done this enough during the World Cup. Too many reports were about how the players felt or passing along a pregame quote or, a Fox favorite, comparing an athlete such as the Netherlands’ 6-foot-5 defender Virgil van Dijk to a tight end in the NFL. It felt as if Taft was too often just finding something to say instead of uncovering something different.

… Last week, it was good for Amazon to have LeBron James’ “The Shop” as an alternate broadcast alongside “TNF,” but it was kind of weird that James wasn’t on for the whole game, only appearing via Zoom during the first half. He had a game to play the night before and one the next day. Everyone else being on the show — and having guests such as Odell Beckham Jr. — can work, but you need James for all four quarters. Sports broadcasting load management is a thing now! … ESPN debuted its 3-pointer distance tracker, which at first examination feels like a good addition. The broadcast puts a stamp on the screen for any shots that are from 25 feet or farther. It’s kind of like a home run distance tracker, but probably more accurate. Here’s a 31-footer from Steph Curry. … Kathryn Tappen was slated to receive one of the most coveted sideline reporter jobs in the business, replacing Michele Tafoya on NBC’s “Sunday Night Football.” Instead, with the move not in writing, the job went to Melissa Stark. Now, Tappen is going to be off of the network’s golf coverage, too. … CBS’ intros of Army-Navy are really good every year, and this weekend’s edition was no different. We talk a lot here about how sports media platforms should use Twitter — and CBS does it right with these openings. CBS’ senior creative director Pete Radovich Jr. and his team put a lot of hard work into them, so why only air them at the beginning of broadcasts, considering people might be late to tune in? Post them earlier in the day — which CBS did — and let people find it on social media, which actually gives the packages a lot more value in terms of potentially driving people to watch the game. … Sydney Lipsitz has been promoted to executive and chief of staff for CAA’s broadcasting department. She joined CAA in 2018 as a mailroom clerk. Lipsitz is known for great taste: Sources say she is a loyal SportsClicker reader. … Coming next Monday, the first SportsClicker Power Rankings, which will cover the 2022 year.

Two of the biggest issues between Apple and the NFL in negotiations for Sunday Ticket rights have been the following, from what I’ve heard:

1. Originally, Apple wanted to put Sunday Ticket on its Apple TV+ service, which costs $6.99 per month

2. The NFL is requiring the price of the package to be premium to protect CBS and Fox Sports’ Sunday packages. If it were priced too low, too many people would get it and it would crush the broadcast networks’ viewerships.

This is part of the reason that it has taken so long for the two sides to come to an agreement. There is likely more.

Apple is still the favorite to land Sunday Ticket, and it wouldn’t be surprising if a deal is done relatively soon. It has taken an inordinately long time, however, as both sides are known to be a bit arrogant. In most of Apple’s negotiations and the NFL’s negotiations with other companies, they own the product the other side has to be involved with, which gives them a vastly superior hand. So, from what I understand, there has been a lot of staring at each other.

As we reported on the podcast last week, MLS’ linear broadcast deal beginning in a few months will be with Fox Sports and without ESPN involved, according to sources. All the games will be available through Apple TV+’s subscription.

Sources said MLS had a standoff with Fox and ESPN. Both networks balked at paying much of anything for the games. In the original bidding, neither network was anywhere near the price compared to Apple’s guarantee of $250 million per season. ESPN finally walked away from negotiations, leaving Fox as the lone bidder and willing to take the programming.

Meanwhile, Apple/MLS will charge $14.99 for a monthly subscription to all the games. The idea is to grow MLS globally with the obvious issue that it is not yet a top league. If MLS can bring in Lionel Messi — and if he is playing at a level that negates the perception that it is a retirement league — that could be a boon because the aesthetics of Messi, arguably the greatest player of all time, are different, as evidenced by his no-look assist in the quarterfinals against the Netherlands.

If you are looking for a sports book to buy for a friend or family member, my dad, Papa Clicker, Herb Marchand, has you covered. Here are the seven books that received 4.5 or more out of 5 clickers this year, including — as a bonus for our subscribers — a previously unpublished review No. 100 on Messi and Cristiano Ronaldo.

The sports media world was utterly shocked by the sudden passing of longtime soccer writer Grant Wahl on Friday. What stood out about the many tributes was not just the mentions of the influence he had on the game, but, more importantly, the many stories about how he was there to help others in the business. Condolences to his family and friends.