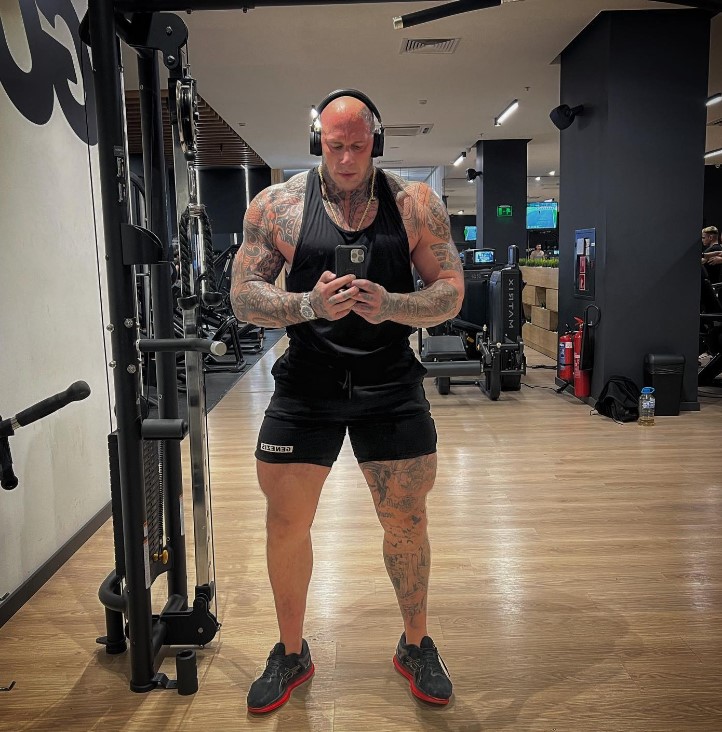 Martyn Ford has packed on a serious amount of weight while filming a movie in Bulgaria after a proposed fight with The Iranian Hulk was scrapped.

The ‘World’s Scariest Man’ was supposed to face off against his foe – real name Sajad Gharibi – at the O2 Arena in London in April on a card that was also set to feature Patrice Evra and Jamie O’Hara, along with podcast host James English.

The fight, however, fell through after the pair clashed in a face-off. Ford easily pushed Gharibi to the ground and it became clear that it may not be a fair fight.

After this incident, footage emerged of the Iranian Hulk breaking down while appearing on a TV show before revealing he had been disowned by his parents and that he was suicidal.

Subsequently, Ford called the event organisers and told them that he would no longer be going ahead with the fight, as he didn’t want to be responsible for Gharibi being bullied and taking his own life.

So instead, the Iranian Hulk moved on to a different opponent in the form of the Kazakh Titan, whose real name is Djumanov Almat Bakhytovich.

The pair met in the ring in August and the Kazakh Titan was utterly dominant, landing shots to the body and head at will, to the point that the Iranian Hulk repeatedly turned away from his opponent and the contest was duly stopped.

Ford is still looking for the right opportunity to make his boxing debut but is also interested in taking an MMA bout after signing with Polish promotion KSW a few years ago.


‘I don’t think Helenius could beat me,’ jokes John Fury ahead of Wilder comeback


Benn’s doctor reportedly facing investigation over claims made about doping

However, his combat sports training has been on hold for the last couple of months as he has been shooting a movie in Bulgaria and living in a hotel.

Despite that, he’s managed to pack on 25lbs since revealing he had slimmed down to 315llbs back in March in order to be more agile in his boxing debut.

“54 KG / 340lb It’s incredible what a happy MIND can do, the last few months, my food has been off (difficultly living in a hotel room) training has been consistent BUT it’s been in a commercial gym with no training partner,” Ford wrote alongside a picture of him looking jacked.

“Work has been amazing but extremely tough physically and sleep deprived …. HOWEVER i have been so happy, so great full [sic] and had absolutely zero stress while I’ve been here …. And my god it shows in my results …..

“Strength up. Weight up. Muscle mass up Just goes to show you how IMPORTANT air is to manage your stress levels and to stay HAPPY and HEALTHY.

“Not only that, having a CLEAR focus and a solid purpose to train. Bulgaria has been amazing for me, for so many reasons, appreciate each and everyone of you who has added to this incredible.”

UFC legend Michael Bisping has been working on the movie with Ford and they even linked up for a couple of training sessions.

However, for the most part, it appears he’s gone without a gym buddy during his time in Sofia and the results are phenomenal.