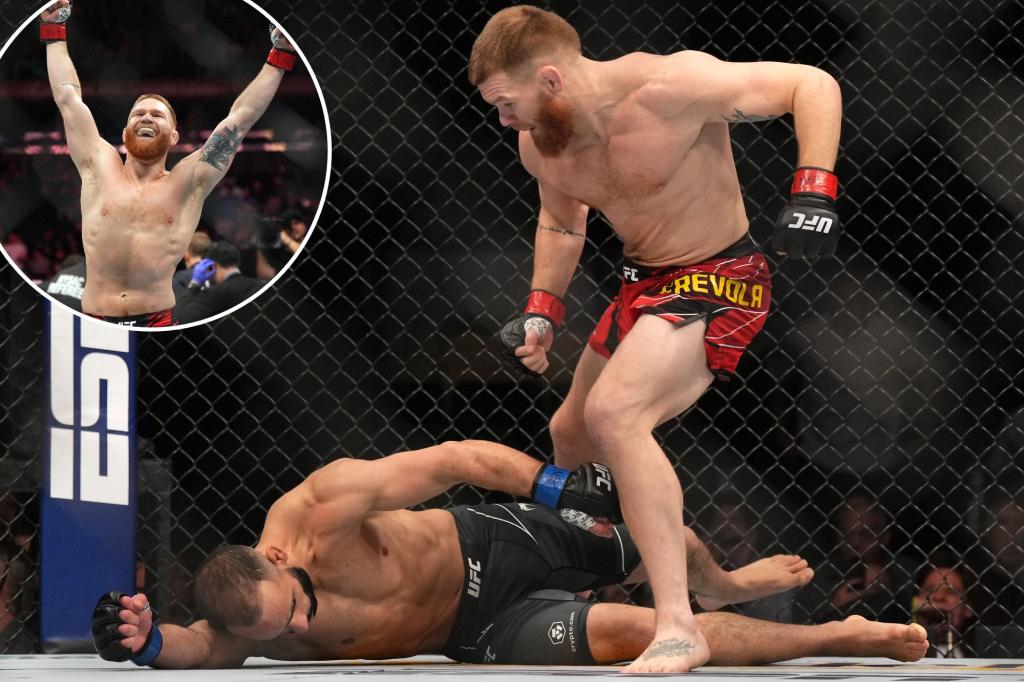 Matt Frevola had the Garden eating out of his hand — the same hand he used to take Ottman Azaitar’s ‘O.’

After walking out to “Narco” by Blasterjaxx and Timmy Trumpet — the same tune used by Mets closer Edwin Diaz this past season — the Huntington-based lightweight needed just half a round to knock out previously unbeaten Azaitar on the early preliminary portion of UFC 281 on Saturday night.

“Unreal,” Frevola (10-3-1, six finishes) said of the feeling of picking up his emphatic victory. “Honestly, this feels like a dream right now.”

The victory comes 10 months after another first-round finish for Frevola, via TKO against Genaro Valdez, to lift his record in the UFC to 4-3-1.

Frevola took the center of the octagon early as both fighters struggled to find their preferred distance. Two minutes in, Azaitar (13-1, 12 finishes), competing for the first time in more than two years after picking up two first-round (T)KOs to being his UFC run, landed a short left hook that got Frevola’s attention and allowed the Moroccan-German to take center.

After landing a stiff jab, Frevola took advantage of a sloppy rush from his opponent to land a stinging right hook upstairs followed by the left hook that put Azaitar’s lights out. Frevola managed to land a pair of winging right hooks to his vulnerable opponent, who lay on his side on the canvas.

“I was planning on, when he rushed forward like that, to change levels and take him down,” Frevola told reporters. “I’m a shark; I’m a lion. When I smell blood when you step into the wheelhouse, I’m gonna throw. And when I throw, I land. And when I hurt you, I finish you.”

The finish earned a big pop from the local crowd, who showered the Long Island native with cheers. He easily coaxed a healthy contingent off the fans to follow his nickname, “Steamrolla” with a sing-song “Fre-vo-la” follow-up.

The greeting in Erin Blanchfield’s backyard at the Garden may not have been ideal.

Didn’t matter, as the Elmwood Park, N.J. native dominated popular Englishwoman Molly McCann on the mat before securing a tapout via kimura at 3:37 of the first round during their flyweight matchup on the prelims.

“When I got this matchup with Molly, I knew that she was super hyped, so I was probably gonna get some boos, even though it’s in New York,” Blanchfield (10-1, five finishes) told reporters. “So I kind of embraced that. I knew I was gonna make them cheer for me after.”

It was McCann (13-5, six finishes) who received the bigger, more positive reaction during her walkout and introductions. Blanchfield’s reception was mixed, at best, from a crowd that McCann expected would have plenty of her countryman in attendance.

McCann, on the heels of a pair of scintillating knockout victories this year, had the better of the striking exchanges early. But Blanchfield soon secured a takedown into side control before achieving the dominant crucifix position just two minutes into the bout.

Blanchfield rained down punches and elbows to McCann, who furiously fought to free her arms and defend her exposed head.

Keep up with the most important sports news

Sign up for Starting Lineup for the biggest stories.

“Honestly, I was surprised the ref didn’t stop it,” Blanchfield told reporters. “She was moving, so I can kind of get it. But in the moment, I was like, How many times do I have to hit her to get him to stop it.”

Without dealing enough damage to secure a stoppage, Blanchfield changed tactics and fished for a kumura. The 23-year-old, one of the brightest prospects in women’s MMA, had McCann’s left arm deep in the shoulder lock before abandoning it, as McCann defended well enough to prevent Blanchfield from stepping her leg over for more leverage.

But that only slowed down the superlative grappler Blanchfield, who adjusted and got the tapout. Unlike the first attempt, she knew the final lock had the potential to hurt McCann.

“The first one, no, because she was blocking my leg,” Blanchfield said of the potential to break McCann’s arm. “I needed to get that leg over the head to really get her arm behind her back. The second one, I knew if she didn’t tap, I was gonna, like, rip her shoulder off.”

By then, the Garden was squarely on her side.

Mike Trizano, based out of Tiger Schulmann’s MMA in Ramsey, N.J., secured a first-round knockout of his own earlier in the evening against Seung Woo Choi. The victory over the South Korean Choi (10-6, six finishes) snapped a two-fight skid for Trizano (10-3, five finishes), a former season winner on “The Ultimate Fighter.” However, he missed weight for the featherweight contest and was not eligible for any Performance of the Night bonuses.

Trizano’s teammate and pal Julio Arce (18-6, 10 finishes), of Queens, who competed in the fight before, fell via unanimous decision to Montel Jackson (12-2, seven finishes).