On Friday night, Megan Fox and Machine Gun Kelly arrived at the Casamigos Tequila Halloween party in Beverly Hills in a wild couples costume, playing a former couple with a rock-and-roll reputation that out paces even Fox and MGK. The pair wore a throwback outfit belonging to ‘90s era Pamela Anderson and Tommy Lee. 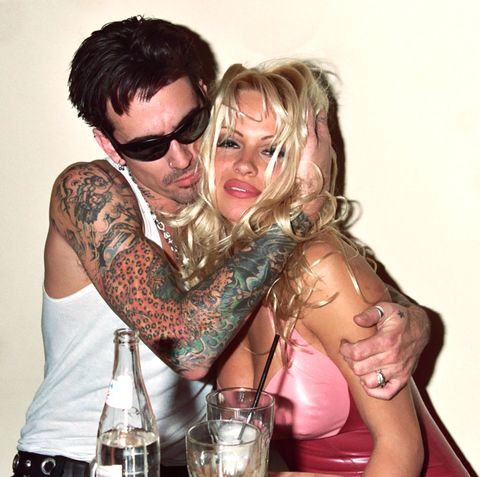 Their outfits were based on the ones that Anderson and Lee wore to the grand opening party for the Hard Rock Hotel & Casino in Las Vegas in 1995. Fox wore a pink and red latex mini-dress with an extremely low neckline and had her hair up in big bleached waves. She had a sharp white manicure and clear plastic heels, with heavy makeup in the style of the time. 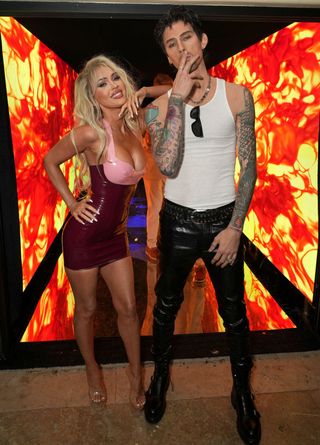 Kelly was wearing a white tank top, black leather pants, a chain and studded belt, and had his hair dyed black for the night. He was also showing a lot of Mötley Crüe energy with a cigarette in between his lips. 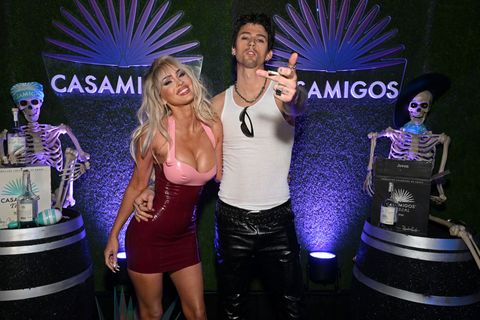 Fox met Kelly got engaged in January of this year after meeting in 2020 on the set of Midnight in the Switchgrass.

“In July of 2020 we sat under this banyan tree,” Fox wrote on Instagram while announcing their engagement. “We asked for magic. We were oblivious to the pain we would face together in such a short, frenetic period of time. Unaware of the work and sacrifices the relationship would require from us but intoxicated off of the love. And the karma.”

“Somehow a year and a half later, having walked through hell together, and having laughed more than I ever imagined possible, he asked me to marry him,” she continued. “And just as in every lifetime before this one, and as in every lifetime that will follow it, I said yes.…and then we drank each other’s blood.”