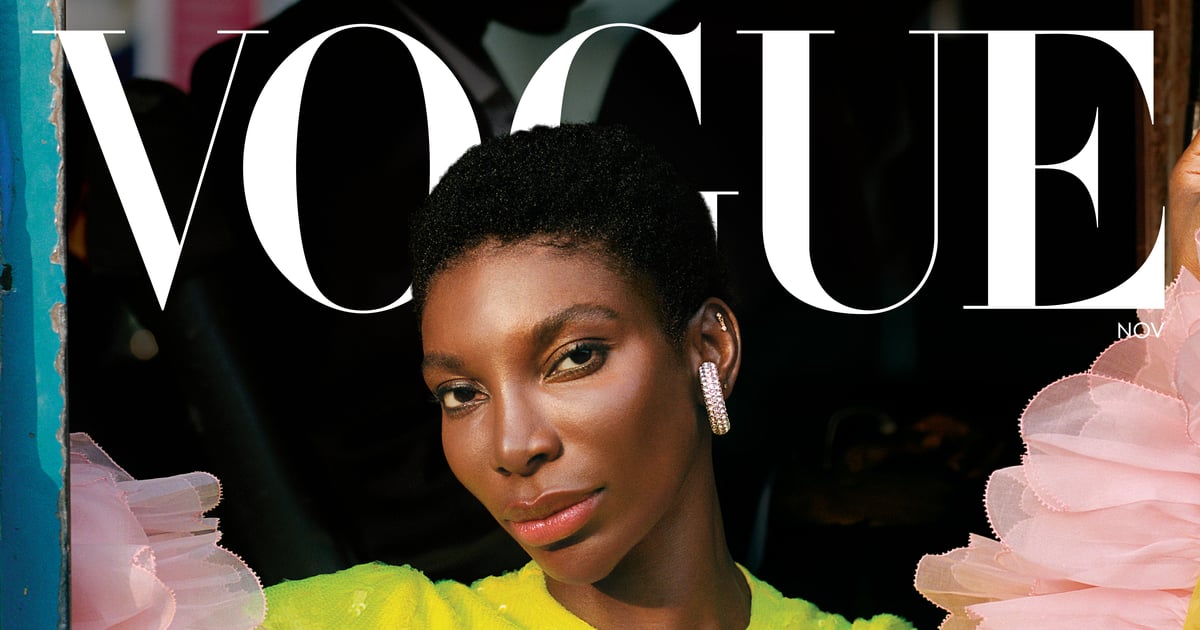 Michaela Coel has received her due recognition as Vogue’s November 2022 cover star. A year after winning her first Emmy (and making history in the process), the British screenwriter brought Vogue’s team to Accra, Ghana’s capital city, for the shoot, marking a new set location for the brand. “They asked me where I would like to shoot it,” she said in a video posted on the magazine’s Instagram page. “I thought to myself, ‘Shoot for the stars. Aim for the moon.’ I said Ghana.” Enter her historic cover.

Coel posed in an illuminating yellow sequined gown designed by Alessandro Michele for Gucci. The high-octane garment boasted a prominent keyhole cutout attached to the high neckline by a crystal rhinestone brooch, which matched her hoop earrings. In line with Michele’s penchant for frills and embellishments, the gown’s sleeves were trimmed with soft pink feathers for a whimsical effect.

The rest of the cover shoot was just as stunning, if not more resonant than the main image, as it featured different scenes from Ghana. In a particularly standout photograph, Coel showcased a black-and-white polka-dot Gucci pantsuit against a backdrop of pedestrians carrying a range of merchandise. She teamed the power ensemble with a white Michael Kors fur coat, blue gloves, and white lace-up boots from Gucci. In another shot, she modeled with her father and grandmother in a hot-pink blazer and eye-catching Louis Vuitton dress. She also posed in a black Louis Vuitton jacket worn over a multicolor Christopher John Rogers pantsuit.

In conversation with Vogue writer Chioma Nnadi, the “I May Destroy You” creator discussed her upcoming role in “Black Panther: Wakanda Forever,” touching on the aftermath of Chadwick Boseman’s death and the importance of representing a queer Ghanian character. “That sold me on the role, the fact that my character’s queer. I thought: I like that, I want to show that to Ghana,” she said. “People say, ‘Oh, it’s fine, it’s just politics.’ But I don’t think it is just politics when it affects how people get to live their daily lives.”

Ahead, preview some of the images, and catch the full story here.