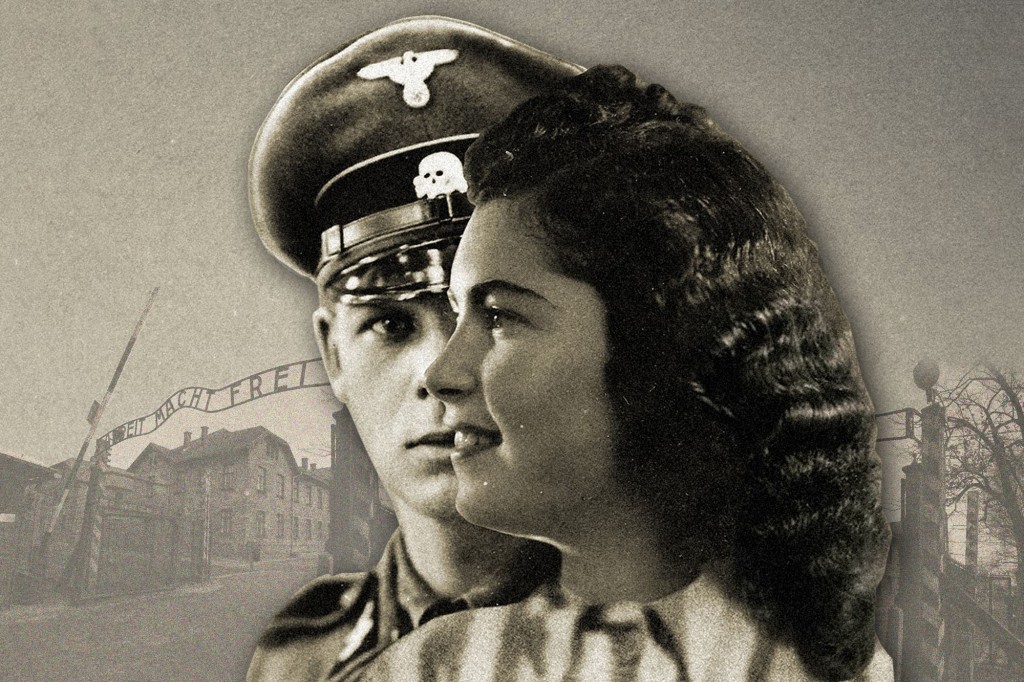 When Bat-Sheva Dagan first began her duties inside the hellish confines of Auschwitz, she was supervised by SS guards led by a young Nazi officer named Franz Wunsch.

Given his position in charge, it wasn’t immediately clear why he spent so much time on the processing floor. But he’d pace the area where Dagan and other Jewish women worked, sorting through the suitcases that had been unloaded from trains bringing in tens of thousands of people to meet their deaths at the camp.

Soon, however, the Polish teenager became suspicious of Wunsch’s motives. She often spotted the otherwise taciturn officer in conversation with Helena Citron, her fellow prisoner and co-worker.

“He would speak to her and nobody else,” Dagan told The Post. “I watched from a distance, but it looked like they had something between them.”

As impossible as it sounds, the two were carrying on a forbidden romance forged in the shadows of the gas chamber.

Dagan and others who caught on to the situation struggled to fathom how Citron, torn from her homeland in Slovakia to live at the mercy of the Third Reich, could entertain the idea of getting involved with one of its servants.

The taboo relationship between Wunsch and Citron is now the focus of the film, “Love It Was Not” (out Friday). The documentary doesn’t pass judgment and strives to present an unbiased account of the controversial affair that lasted more than two years.

Director Maya Sarfaty embarked on the project after hearing about the courtship from her then-acting instructor, Miki Marin, a favored niece and confidante of Citron, who died in 2007.

“Before I made the film, I thought people might not even believe the story,” said Sarfarty.

The Israeli tracked down a number of Citron’s associates at Auschwitz and interviewed Wunsch’s daughter, Dagmar. Remarkably, Dagmar explained how her father was obsessed with his “first love” from the moment they met in 1942 until his death in 2005.

Wunsch made dozens of copies of a black-and-white photo of Citron taken at the camp, even pasting her smiling face inside a gold locket next to his own. (Bizarrely, the Austrian would doctor postcards of women posing in scenic places by replacing their heads with a cutout of Citron’s.)

The full version of the original picture shows the awful truth: A pretty girl wearing the standard-issue striped overalls that dehumanized the prisoners of Auschwitz.

Marin remarked on her aunt’s stylish hairdo and the belt emphasizing her waist and tactfully pointed out that, unlike victims starved by their captors, her loved one appeared almost plump.

“I don’t really know what to think because she looks so beautiful and healthy,” Marin said.

Similarly, when they worked together, Dagan was struck by Citron’s shapely figure and general well-being. “She was OK, always healthy looking,” recalled the Holocaust survivor now in her late nineties.

Indeed, Citron, who features on Sarfaty’s documentary in detailed excerpts from previous interviews, confirmed that Wunsch would supply her with extra food and give privileges and protection to her and her friends.

“He loved me to the point of madness,” she admitted.

Citron shared the circumstances of their initial encounter, which happened several months after she arrived at Auschwitz. She was among the first “official” set of 1,000 Jewish women transported there in 1942.

They met during her opening shift at a unit colloquially called “Canada” because people perceived the North American country as rich and plentiful. Located a few hundred yards from the crematorium, it was where incoming prisoners were separated from their personal effects. Workers such as Citron were responsible for retrieving valuables and categorizing clothing.

Most of the owners were gassed on arrival, never knowing that their treasured belongings were in the process of being looted as they were led to their deaths.

“At noon there was a birthday party for the SS in charge of the commando,” Citron recalled of the fateful day she met Wunsch in 1942. “Rita, the kapo [a prisoner who assisted guards], walked around the barrack looking for performers … she asked, ‘Who dances, who sings?’”

As the daughter of the cantor of her small town in Slovakia, Citron was volunteered by an inmate who knew about her musical talents.

“The girls all said: ‘Sing, maybe they’ll keep you there. Otherwise they’ll send you to the penal commando to your death,’” she remembered. “And I thought: ‘I’m better off dying than singing.’”

Nevertheless she chose a mournful tune whose words she knew in German. Titled “Love It Was Not,” it is told from the perspective of a woman questioning the truth of a romance.

Once the show finished, Wunsch, a guest at the party, approached Citron and politely asked her to repeat the song for him. It was the only time a member of the SS had spoken to her with respect.

This particular memory was recorded during Citron’s frank discussion with the Shoah Foundation. The non-profit, founded in 1994 by Stephen Spielberg, has archived the experiences of thousands of Holocaust survivors.

As the other girls had predicted, Citron stayed in her position at Canada where, at least for a brief period, she said she “hated [Wunsch] at first” and viewed him “evil like all of the SS.”

But her attitude softened when he began slipping her notes that said, “Don’t worry, I’ll get you out of here” and “We’ll be together, even if it’s just for one day.” As well as giving her food, he’d bring fresh sheets and pillows to her freezing block, occasionally gazing at her while she slept.

“He would say: ‘For you, anything,’” she told the Shoah Foundation. Even though the illicit liaison was an open secret among many prisoners and guards, the SS appeared to turn a blind eye. Citron was once interrogated — and tortured — about the relationship but refused to confirm its existence. She knew that a formal discovery would lead to them both being executed.

Speculating in “Love It Was Not,” about the reaction of other inmates who knew about the affair, Dagan said: “On the one hand, [they thought] that she was lucky, and on the other that she was in danger.”

Envy was an inevitable part of the equation. “Everyone was so jealous, deeply,” Dagan explained on camera. “[Resentful] of the very fact that she had that chance and we would go like sheep to the slaughter.”

The most dramatic example of Wunsch’s devotion to Citron was an intervention which saved her sister, Roza Graubert, from the gas chamber. The mom-of-two was transported to Auschwitz from Slovakia with her nine-year-old daughter and newborn son.

Citron heard about their arrival and ran to the crematorium where she feared they would be killed. She hysterically told the guards that she wanted to die with them. But a friend had alerted Wunsch, who rushed to the scene as Joseph Mengele, the notorious SS physician known as “The Angel of Death,” callously decided which of the prisoners would live or die.

Graubert and her children were dispatched to the line on the right, which led directly to the building where the inmates were gassed. After speaking with Mengele, Wunsch won a reprieve for Citron’s sister, someone the SS assumed could be a good worker.

Speaking in a video clip shown in the Safarty documentary, Graubert recalled: “We were where you take off your clothes. Then the door opened and someone called my name.”

She was asked if she was Citron’s sister and told to leave the kids for a moment in the care of another prisoner. Weeks later — when Citron could no longer keep up the pretense about their absence —  she finally told her sister that her children had been killed.

The romance between Citron and the guard continued, with Citron eternally grateful to Wunsch for saving the life of her sibling. But insiders, including Dagan, believe the couple never had sex.

“We slept in bunks stacked on top of each other in rows of three,” Dagan told The Post. “It would have been impossible.” Equally out of the question was the chance Citron visited the officers’ quarters without being caught.

Nobody could deny that Wunsch was deeply in love with his sweetheart. Whether his passion was reciprocated remains subject to debate.

Auschwitz inmate Roma Ben Atar Notkovich told Sarfarty: “The fact that, through this relationship, she didn’t have to endure that hell of hunger, made it all worthwhile.”

Another prisoner, Katka Potterwright Greenberger, commented: “She loved him back … Maybe because he was good to her, it appealed to her. And she was also flattered by the fact he chose her.”

The dynamics are complex. Sarfaty hopes her audience will resist the temptation to draw conclusions that are black or white. “It’s not a simple story of exploitation and self-protection,” the filmmaker said. “Helena did whatever she needed to do in order to survive — but she developed feelings for Frank.”

That said, in one of her final media interviews, Citron played down the significance of the romance. “Love it was not,” she cynically said, referencing the song that had captivated Wunsch. “It was a little fling, a passing infatuation.”

Interestingly, when Sarfaty was deep into her research, she discovered that the SS officer and his prisoner had remembered the nature of the ballad very differently. Citron — whose recollection was confirmed by other inmates at the commander’s birthday party — insisted she sang “Love It Was Not.” But Wunsch told people that the life-changing tune which brought them together had the far more tender title of “My Heart Is Homesick for Your Love.”

Whomever was right, their bond was broken forever when the Russians liberated Auschwitz in January 1945. Wunsch’s daughter, Dagmar, showed Sarfaty her father’s diary in which he recorded his last moments with Citron before the camp was stormed.

“’Take care, Helena, you’ll make it. I’ve loved you so much,’” Wunsch wrote about their final conversation. He went on to remember: “She embraces me one more time. We kiss long and intimately. One last look and she leaves the barrack quickly.”

Some 27 years later, Wunsch caught another glimpse of the love of his life. Citron, by then married with a family and living in Israel, testified at his 1972 trial in Austria for war crimes. The charges included dropping in the hydrogen cyanide pellets that gassed prisoners in the death chambers.

She ignored threats from Jewish rights activists and defended her former beau in response to a desperate appeal from his wife.

“I travelled with a clear conscience,” Citron told The Shoah Foundation. Once in Vienna, she informed the jury that Wunsch “was always good to me” and “helped inmates in other ways.” Still, she considered it her “duty” to outline the “bad things” he had done, specifically his cruel treatment of male prisoners.

Citron recounted the time she refused Wunsch’s request to administer first aid when he damaged his hand after an attack on a defenseless man. “[He] said to me: ‘You may bandage my hand for me,’” she recalled. “I answered that I wouldn’t bandage the hand that beats my brothers.”

Despite what the judge called “an overwhelming evidence of guilt” in the participation of mass murder, Wunsch was acquitted on all counts. He and Citron never saw each other again.

As for Dagan, you might expect a woman who suffered the horrors of Auschwitz to condemn a fellow survivor who helped an SS officer escape justice.

But, speaking on “Love It Was Not,” she exhibited compassion. “I think that [Helena] going [to the trial] was a humane thing to do.” As she explained to The Post:  “If she’d stayed away, people would think she was hiding the truth. She was a brave women with honesty and integrity.