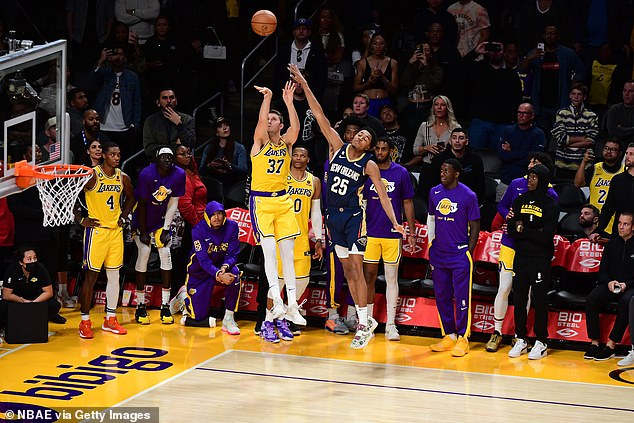 The Los Angeles Lakers put together consecutive wins for the first time this season as they defeated the New Orleans Pelicans 120-117.

Lebron James and Anthony Davis both recorded 20-point double-doubles in the game, however it was Lonnie Walker IV who lead the game in points.

Walker scored 28 points after knocking down nine shots from the field, five of which came from beyond 3-point range.

The Lakers beat the Nuggets Sunday and two straight wins are tentative signs of an upturn in form after a bad star to the season. 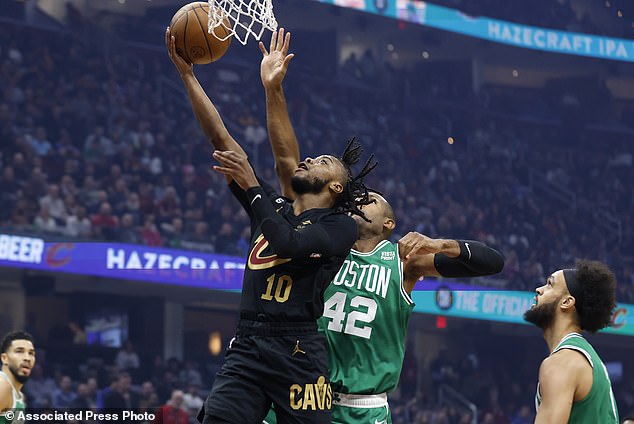 Zion Williamson lead things on the Pelicans end scoring 27, while CJ McCollum was second on the score sheet with 22.

Elsewhere, Darius Garland missed everything while sitting on the bench, but mostly the joy of playing and winning.

He’s back, and it looked like he never left.

Garland scored 29 points in his return after missing five games with an ugly eye injury, Donovan Mitchell added 25 and the Cleveland Cavaliers beat the Boston Celtics 114-113 in overtime on Wednesday night for their sixth straight victory.

Garland added 12 assists, including an alley-oop to Mitchell in OT that put the Cavs up 112-109 and they held on for their second win over the Celtics in less than a week.

Jayson Tatum’s basket with 1:04 left pulled Boston within a point, and thanks to some poor possessions by Cleveland, the Celtics had a chance to win it at the buzzer before Jaylen Brown’s 18-footer went off the back of the rim.

Brown scored 30 and Tatum had 26 points and 12 rebounds for the Celtics, who were looking to avenge an OT loss at home last week to the Cavs. But Cleveland overcame a 15-point deficit and now has two wins over the defending Eastern Conference champions. 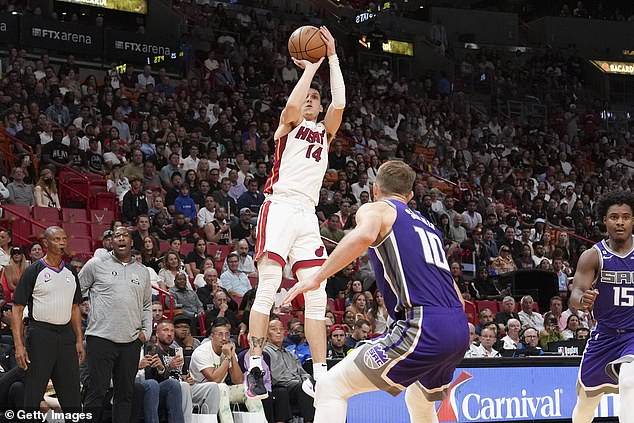 Herro’s 3-pointer with 1.8 seconds left became the game winner, lifting the Miami Heat past the Sacramento Kings 110-107 on Wednesday night.

Herro had a game-high 26 for the Heat, who won for the second straight night after topping Golden State on Tuesday. Herro missed much of that game after temporarily losing vision after getting poked in the left eye.

Kevin Huerter and Domantas Sabonis each scored 22 for Sacramento, which got 19 from Malik Monk and 12 from Harrison Barnes. Sabonis added 12 rebounds and eight assists.

It was the first game in the NBA this season where neither team held a lead of more than seven points. Sacramento’s biggest lead was seven, Miami’s was six.

Herro added 12 rebounds and three blocks for Miami, which played without Jimmy Butler – sidelined with tightness in his left hip that caused him to miss his first game of the season. Sacramento was without De´Aaron Fox, who sat with a bone bruise on his right knee. 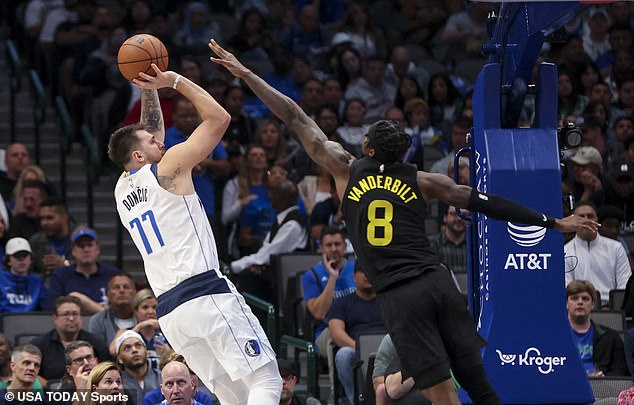 Luka Doncic scored 33 points and had 11 assists as the host Dallas Mavericks overcame double-digit deficits on multiple occasions to beat the Utah Jazz 103-100.

Jordan Clarkson finished with 22 points on four 3-pointers with eight assists to lead the Jazz, but he missed a game-tying attempt in the last second as Utah began a three-game road trip with a defeat.

Collin Sexton totaled 19 points and gave Utah a chance at forcing overtime after scoring to make it a three-point game with 29.2 seconds left before snaring a rebound with 6.7 seconds to go. 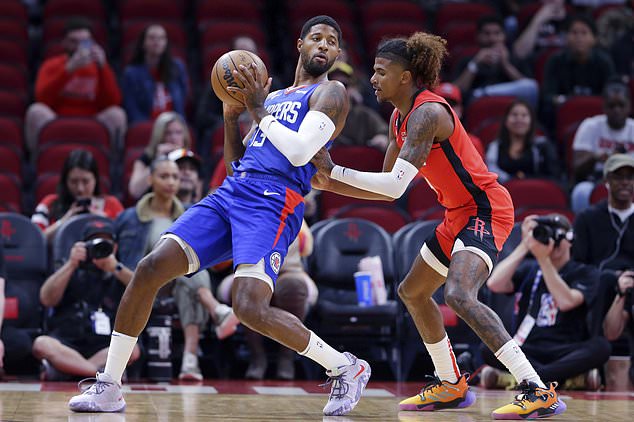 It was the Clippers´ second win in a row over Houston following a 95-93 victory on Monday that snapped a four-game skid.

‘It was a good win for us,’ Los Angeles coach Tyronn Lue said. ‘I knew they were going to come in and play hard. They´re an improved basketball team.’

Los Angeles was without Kawhi Leonard, who did not make the road trip because of stiffness in his surgically repaired right knee. It´s the fifth straight game he´s missed, and his time off will stretch to six games Friday when the team visits San Antonio.

Lue said he doesn’t love how the team has played with Leonard out and that it’s on him to help the players adjust to the forward’s absence. He added that they’ve looked better in the last two games than they did in the first few games Leonard missed.

‘Since the two OKC games we have made a good emphasis on attacking,’ Lue said. ‘If we keep playing that way, we can get better.’

Alperen Sengun had 26 points and 13 rebounds and Jalen Green scored 22 points for the Rockets, who have dropped five straight since their only win this season.

The game featured the return of John Wall, who spent the last two seasons in Houston, but sat out all last season with the Rockets unable to find a trade destination for the veteran.

He had a highlight-reel play when he dribbled into the lane and made a behind-the-back pass to Moses Brown, who finished with a dunk for the first points of the fourth quarter. 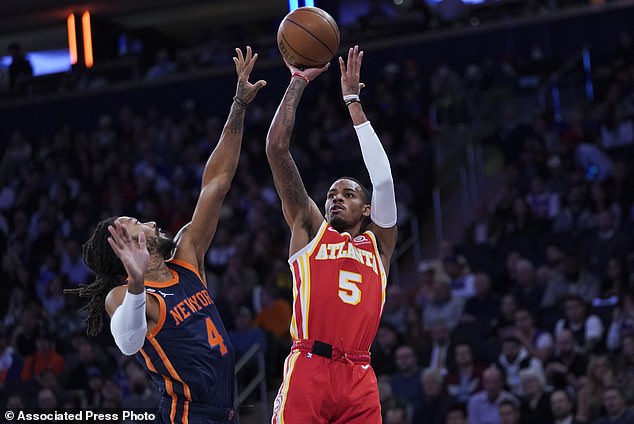 Dejounte Murray scored a career-high 36 points and the Atlanta Hawks overcame a 23-point deficit to beat the New York Knicks 112-99 on Wednesday night.

Trae Young added 17 points despite missing time in the second half because of a left eye contusion, before returning wearing protective glasses with 7:04 left in the game.

‘I´m feeling all right. I can´t see out of one eye too well,’ Young said. ‘When I came back I didn´t really want to shoot at all, I just wanted to be a presence out there for my teammates.’

‘I’m a confident player, and I say that in a very humble way,’ Murray said. ‘But, I work very hard on my game. (Young) going out made me turn it up a notch and get the guys together even more.’

Jalen Brunson scored 20 points for the Knicks. RJ Barrett had 19 and Julius Randle finished with 14. 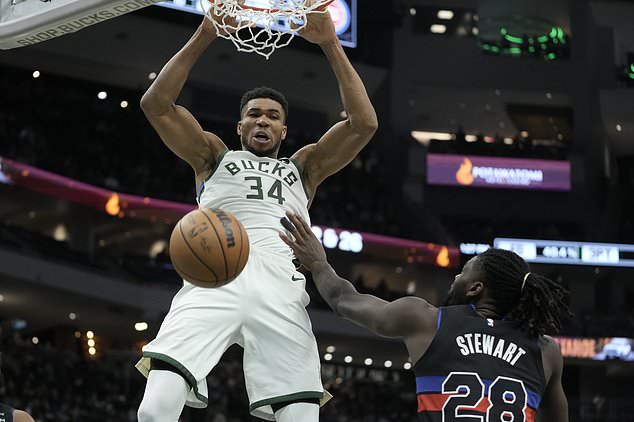 Milwaukee Bucks’ Giannis Antetokounmpo dunks over Detroit Pistons’ Isaiah Stewart during the second half in Milwaukee, helping his side to a win

Giannis Antetokounmpo had 32 points and 12 rebounds and the Milwaukee Bucks matched a franchise record with their seventh straight win to open the season, beating the Detroit Pistons 116-91 on Wednesday night.

Jrue Holiday, who was uncertain to play because of a non-COVID-19 illness, added 26 points for the NBA´s only undefeated team. Jordan Nwora scored 12 off the bench.

Antetokounmpo has scored 30 or more points in six consecutive games. The two-time MVP tallied 15 of the Bucks´ 31 first-quarter points against Detroit. 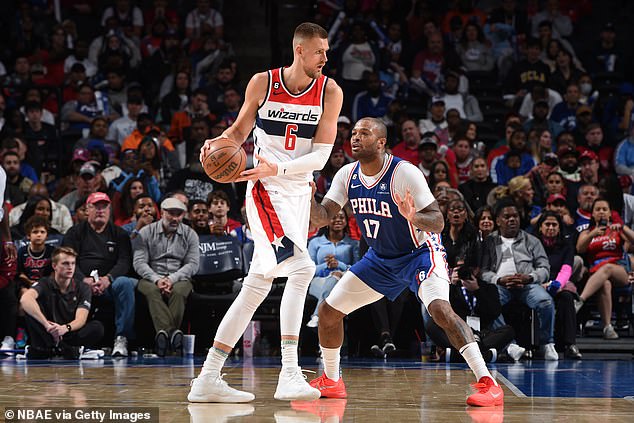 Kristaps Porzingis had 30 points and nine rebounds, Bradley Beal added 29 points and the Washington Wizards took advantage of Joel Embiid’s absence for a 121-111 victory over the Philadelphia 76ers on Wednesday night.

Kyle Kuzma also added 18 points for Washington, which didn’t trail for the final three quarters of the game and was able to match up against Philadelphia’s smaller guard-heavy lineup with a steady diet of interior offense.

‘They had to switch up the style, but they are also good playing this way and playing off a pick and roll,’ Porzingis said. ‘They all can shoot and they are a good team even without him. We made the right adjustments from (Monday night’s 117-96 Philadelphia win) and we came up with the right results.’

Tyrese Maxey scored 32 points for the 76ers, while James Harden had 24 and Tobias Harris added 16.

‘We just didn’t get timely stops,’ Maxey said. ‘They got some easy looks. We got the game close in the fourth quarter, but that’s the time when you have to buckle down and get stops and we didn’t get those stops tonight.’

Embiid missed his third game of the season, sitting out with an illness the team said was not related to COVID-19. Sixers coach Doc Rivers said Embiid has the flu and has not been around the team in recent days to avoid spreading it around the locker room. Embiid, who has averaged 27.2 points and 9.5 rebounds in six games, missed Monday night’s game in Washington for the same reason. 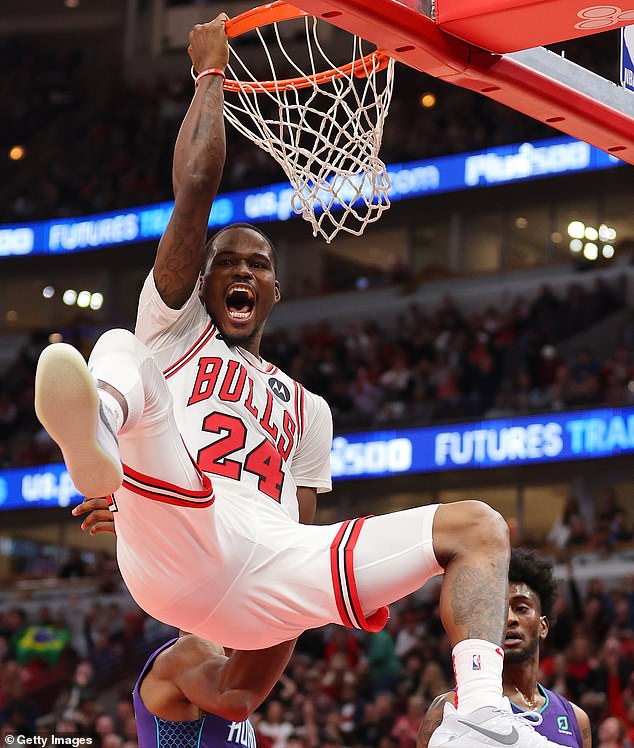 On an off night for two of Chicago’s biggest stars, Javonte Green and the rest of the Bulls picked up the slack.

Green scored 17 points on 7-for-7 shooting, leading a strong performance by Chicago’s reserves and helping the Bulls beat the Charlotte Hornets 106-88 on Wednesday.

Patrick Williams had 16 points and Nikola Vucevic added 14 points and 13 rebounds as Chicago cruised to its second straight win despite a sluggish performance by DeMar DeRozan and Zach LaVine.

‘I think that having everybody involved is going to help our team grow,’ coach Billy Donovan said, ‘and it also takes the pressure off those guys, where if they don’t have a great shooting night, you’re still giving yourself an opportunity to win.’

‘Just giving the starters that extra energy that we’re supposed to give them,’ Green said. ‘They played a lot of minutes last night, so try to give them a break.’ 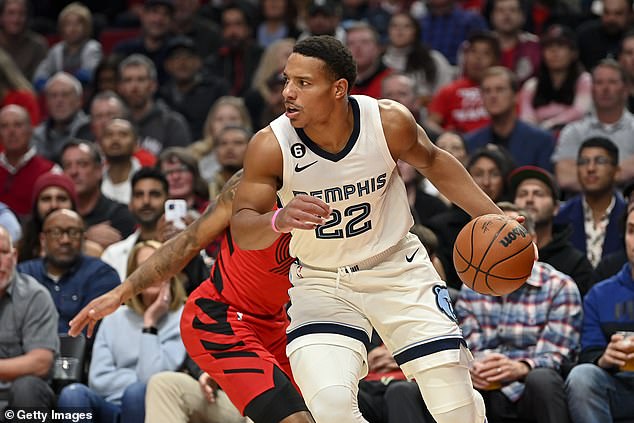 The Memphis Grizzlies defeated the Portland Trailblazers 111-106 in a nail biter that looked like it was anyone’s game late.

Desmand Bane once again came up big for the Grizzlies and lead the team with 29 points. He shot the ball well from both 3-point range shooting 5-8 and the field goal line shooting 10-11.

Anfernee Simons carried the load for Portland in Damien Lillard’s absence, leading the game with 31 points.

Jusef Nurkic and Jerami Grant also chipped in solid performances as both chipped in 23 points in the loss. 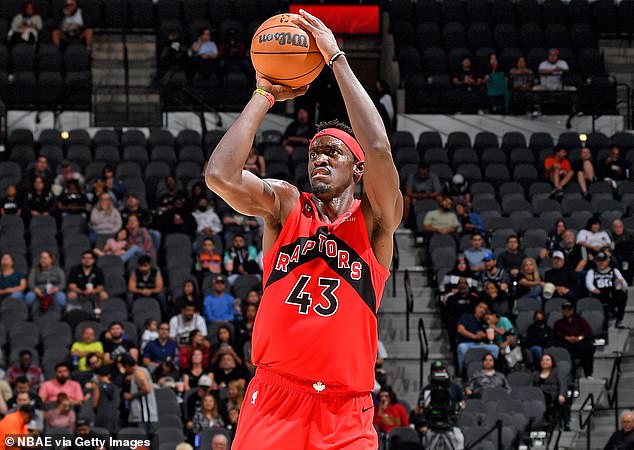 Pascal Siakam #43 of the Toronto Raptors shoots a three point basket against the San Antonio Spurs on November 2, 2022 at the AT&T Center in San Antonio, Texas.

‘I think we just played really hard,’ Toronto forward O.G. Anunoby said. ‘No matter what we see, we just try to go out there and play hard.’

San Antonio was without starters Keldon Johnson and Devin Vassell, and reserves Isaiah Roby and Blake Wesley. The Spurs also sat rookie forward Jeremy Sochan early in the second quarter due to restricted minutes after a one-game absence with flulike symptoms.

Gary Trent Jr. scored 24 points for the Raptors, who were without All-Star guard Fred VanVleet but had plenty left for their largest margin of victory, a season high in points and a season-high 23 turnovers forced.

‘They are really good at that (defensive pressure),’ Spurs forward Keita Bates-Diop said. ‘They switch 1 through 5 and get in the passing lanes. We´ve got to get better at moving off the ball. That´s a really good veteran team. That was a good test for us. That is probably the best team we have played all season.’

Bates-Diop had 17 points. He was the only Spurs starter in double figures.