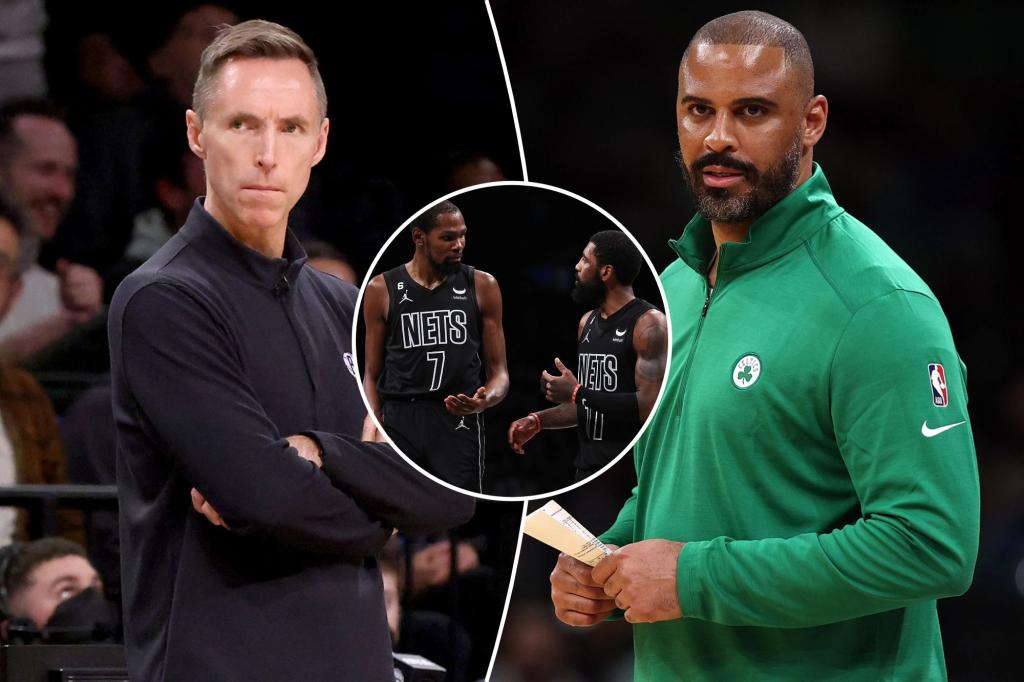 Seven games into their season, not to mention in the middle of a back-to-back, the Nets finally decided it was the right time to get rid of Steve Nash.

And in case their list of problems wasn’t long enough — Nash was certainly on there, but not necessarily at the top — they are expected to add to it by hiring Ime Udoka to replace Nash. Udoka was suspended by the Celtics for the 2022-2023 season for having an improper relationship with a female subordinate on his staff, which included him using crude language in his dialogue with the woman, according to ESPN.

Nash’s departure, which the team announced as a mutual agreement, came amidst a 2-5 start that has been further marred by Kyrie Irving’s promotion of an anti-semitic movie.

There are plenty of tentacles to this shakeup, so here’s a look at who comes out as winners and losers of it all:

Kevin Durant: The Nets’ biggest star gets his wish. Durant made waves in August when he demanded either a trade or the firing of Nash and general manager Sean Marks. Ultimately, neither happened in the short term. Instead, Marks released a statement that said he, Nash and owner Joe Tsai and his wife Clara Wu Tsai met with Durant and his business manager Rich Kleiman and “agreed to move forward with our partnership. We are focusing on basketball, with one collective goal in mind: build a lasting franchise to bring a championship to Brooklyn.”

Now Durant appears as if he will chase that goal with a familiar face in Udoka, who was a Nets assistant coach in 2020-21.

Steve Nash: Yes, the Hall of Fame point guard is now out of a job, but he is free from the mess he found himself in more often than not during his Nets tenure — largely through little fault of his own. Nash certainly had some shortcomings as a first-time head coach, but he is likely to be absolved from heavy blame when this Nets era is revisited due to the headaches he endured.

Hired in 2020, Nash always seemed to be having to manage off-court drama as much as he did on-court issues — Irving’s refusal to get vaccinated against COVID-19 to comply with New York City mandates and thus to play at the start of last season before the Nets softened their stance and allowed him to play in road games; ill-advised trades for James Harden and then Ben Simmons; injuries to Durant and Irving; and then Irving’s latest sideshow, when he tweeted out a link to a film that is filled with anti-semitic views and doubled down on it a few days later in a postgame press conference.

Those are no longer problems for Nash, who took the high road and thanked the Nets in a statement. Perhaps he’ll now take the Kenny Atkinson route by latching on as an assistant for a winning organization.

Ime Udoka: Reportedly in line to take over in Brooklyn, Nash’s former Nets assistant coach gets out of a season-long suspension handed down by the Celtics and returns to the bench. He’ll have his plate full in trying to turn around the Nets’ defense and get his team to focus on basketball instead of the off-court chaos — including Udoka’s own recent history. He will have to prove he deserved a second chance this soon after the Celtics determined that what he had done (the details of which are still not public) deserved a year-long suspension.

Celtics: It seems notable that the Celtics are allowing Udoka to leave freely without requesting any kind of compensation from the Nets, though the head coach of last season’s FInals team is still under contract despite the suspension. But now with Udoka expected to head to Brooklyn, the Celtics and interim coach Joe Mazzulla will no longer have him hanging over their head for the entire season.

Nets: Three-plus years after the organization landed Durant and Irving in free agency, it has fired more coaches than it has won playoff rounds. The Nets stood behind Nash in August when Durant wanted him gone, but changed their minds just seven games into the season. If Nash was on this short of a leash, why not just move on from him last offseason and give the next head coach a chance to have a fresh start?

But worse than firing Nash less than a month into the season is the expected move to hire Udoka to replace him. An organization that has preached the importance of culture is bringing on a new head coach who was in the middle of a suspension for an improper workplace relationship. The Nets were said to be doing their due diligence on Tuesday to look into Udoka’s situation, but for a team that was already in the midst of a mess with Irving’s situation, they are doubling down on putting winning (or at least trying to) over morality.

Sean Marks: When a general manager fires his head coach, he usually loses his last line of defense. With Nash gone, Marks should step squarely onto the hot seat. He has stuck around through Atkinson’s and Nash’s tenures, but at some point he may have to answer for the team’s lack of success. Marks is the one who built the roster — including the Harden and Simmons trades that continue to look worse.

Nets fans: Fandom knows no bounds, but this has to be a difficult team to root for or enjoy watching on a nightly basis considering all the drama going on off the court. Players, coaches and front-office executives come and go, but the fans are often the ones left having to endure the aftermath of the upheaval.

Even before Tuesday, there already had been a good amount of action, with the likes of Christian McCaffrey, Robert Quinn, Roquan Smith, James Robinson, Robbie Anderson, Kadarius Toney, Johnathan Hankins and Deion Jones changing teams in deals.

Here’s a look at the trades that went down on Tuesday, with compensation details via ESPN and NFL Network:

A rare in-division trade that could shake up the NFC North. The 6-1 Vikings were in need of a tight end with Irv Smith going on IR, so the 1-6 Lions sent them a Pro Bowler (who is under contract through 2023) for more draft picks.

After the Bears traded Quinn and Smith off their defense, they gave QB Justin Fields a much-needed weapon on offense. Claypool is under contract through 2023, and the Steelers are one of the best teams at developing wide receiver talents.

A new star pass rusher has arrived in the AFC East. Chubb, a Pro Bowler in the final year of his rookie deal, has 5.5 sacks on the season and will give the Dolphins a big-time threat off the edge.

This one came out of the blue. Ridley is serving a suspension for at least the 2022 season for betting on NFL games. But if he is reinstated for 2023, he could be a steady target for QB Trevor Lawrence.

The Jets have a crowded defensive line, and with Martin not getting a ton of snaps each week, they upgraded their draft capital by sending him to Denver.

The best team in the AFC got better by adding Hines, the shifty running back who is also a strong pass catcher and could thrive in Buffalo’s offense as a secondary option behind Devin Singletary.

And just to make sure the trade ledger is accurate, a few other transactions to note…

Another swing and a miss for MLB

The latest round of MLB managerial musical chairs is over — barring a late change, with The Post’s Jon Heyman previously reporting Dusty Baker is expected to return to the Astros next year despite some uncertainty around GM James Click.

Grifol, a Miami native with Cuban heritage who reportedly emerged as the White Sox’s choice on Tuesday, is the only minority candidate to be hired for a job in this year’s managerial cycle. It serves as the latest example of why MLB should consider implementing incentives similar to what the NFL recently put in place to have teams hire more minorities for top jobs (the NFL now awards draft-pick compensation to teams that develop minority coaches or executives who are hired by other teams).

MLB has the Selig Rule — akin to the NFL’s Rooney Rule — that requires teams to consider minority candidates when filling high-ranking positions such as manager. Last offseason, MLB also added a provision that when a non-minority is promoted within an organization, a minority should be hired or promoted to fill the vacancy. But that may not be enough: Grifol joins only Baker, Dave Roberts, Alex Cora, Dave Martinez and Oli Marmol as minority managers.

“We’ve talked about a variety of things,” commissioner Rob Manfred said Monday at the World Series, per the Associated Press. “We’re going to wait through the end of this season, and we’ll talk about, when the hiring season is over, what, if anything, we should do differently.

“At the end of the day, they’re individual club decisions,” Manfred added. “And all we can do is make sure that we do everything we can to make sure that we have qualified candidates that we’re presenting the clubs. They’re going to make their decisions about that.”