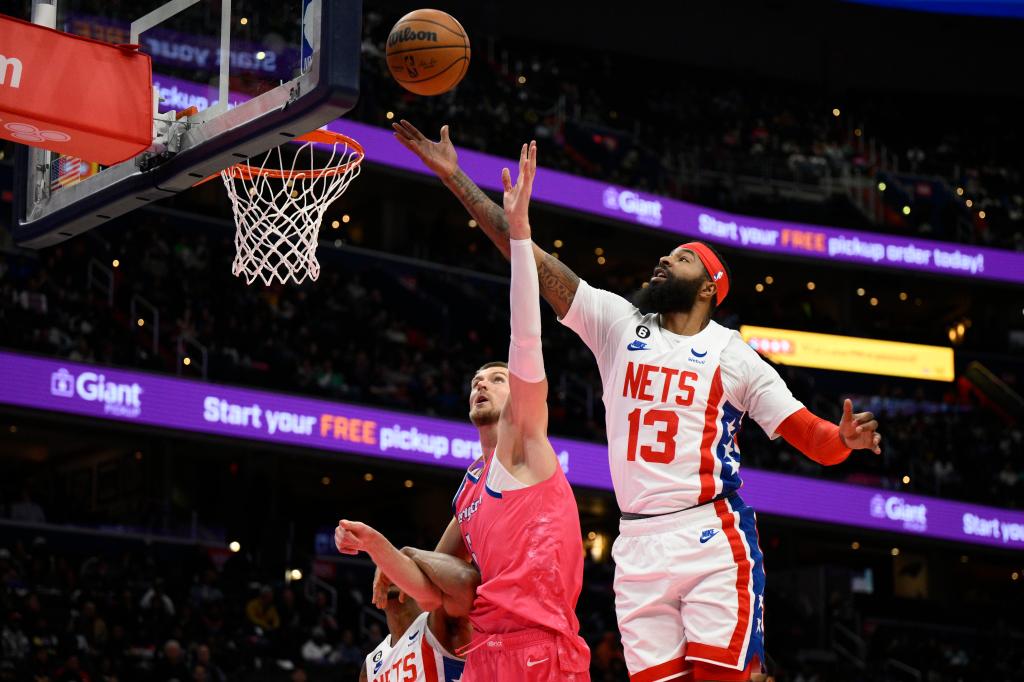 WASHINGTON — The Nets showed off their depth, winning Saturday in Indiana minus eight rotation players — including all five regular starters — and then swapping out their lineup to beat the Wizards, 112-100, two nights later on the road.

Granted, Washington played without Bradley Beal. but the Nets already demonstrated an ability to rotate in their subs and get quality play. They survived a first quarter that saw starting center Nic Claxton — returning from a hamstring injury — saddled with three fouls in a scoreless 4:44, while his counterpart Kristaps Porzingis poured in 12 points on 5-for-7 shooting. But Markieff Morris, who posted a double-double against the Pacers, was a plus-4 in his 6:12 on Monday night, holding down the fort.The Nets went 11 deep, and Kyrie Irving teased at possible lineup changes down the road if people aren’t playing hard.

“The big part was it puts a little bit more pressure on the guy to perform because you do have someone behind you that can sub and come in and play hard and play efficiently and effectively,” coach Jacque Vaughn said. “That happened early to Nic, quick, quick exchange. We had a couple of defensive breakdowns and we had someone to come in for him and then he was able to come back in. So I like that it puts pressure on the guys to perform and holds them accountable. But we have some depth and we’re gonna use it.”

The league trade deadline isn’t until February, but the season for deals unofficially starts on Dec. 15, when players who were signed in the offseason are eligible to be moved. That means rumors will start to percolate before Thursday, and one involves Joe Harris.

The Nets reportedly offered their longest-tenured player as the centerpiece in a deal for John Collins, but Atlanta declined according to The Athletic. Harris is well regarded by the Nets’ front office, and has broken out of his early-season slump. It should be noted that Irving and Seth Curry also both become free agents this summer, which could leave the Nets bereft of 3-point shooting.

Collins is averaging 12.3 points, and has seen his scoring, field-goal percentage and 3-point percentage all drop every year since 2019-20.***

G-League Long Island requested waivers on forward Emmanuel Egbuta. He had been a feel-good story, originally acquired by Long Island as a local tryout player prior to the season.