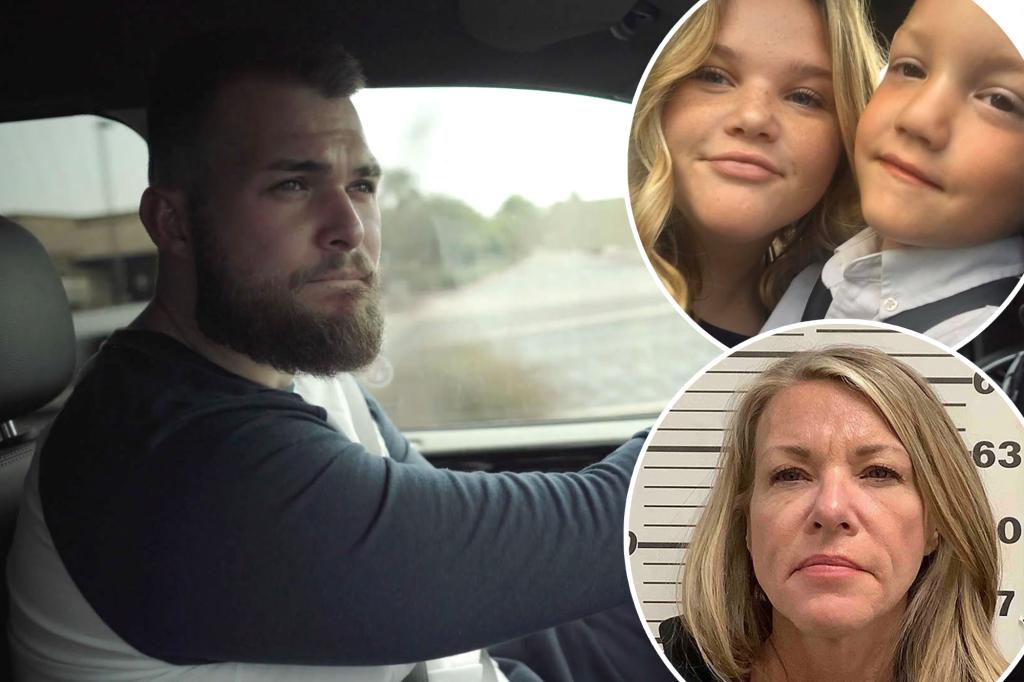 Lori Vallow could explode at any moment.

The dainty blond admitted as much during her campaign for the Mrs. Texas crown in 2004.

“Being a good mom is very important to me, and being a good wife and worker,” Lori said at the time. “And being all those things together is not easy,” she added with a chuckle. “I’m basically a ticking time bomb.”

The haunting pageant footage is featured in the Netflix docuseries “Sins of Our Mother,” out Wednesday.

The film looks at how Lori, 49, a k a “doomsday mom,” went from a doting Mormon housewife to an accused murderer of multiple victims, including her two youngest children Tylee Ryan, 16, and Joshua Jackson “JJ” Vallow, 7. The kids were last seen together smiling for pictures at Yellowstone National Park on Sept. 8, 2019.

She and husband Chad Daybell, 54 — who owned the home in Rexburg, Ida., where Tylee and JJ’s bodies were discovered on June 9, 2020, after a nationwide search — will jointly stand trial for their murders on Jan. 9, 2023. Prosecutors are seeking the death penalty.

“It’s not even human to take your own two children, who you were supposed to love and care for, and do what [my mom] did,” Colby Ryan, Lori’s only surviving son, confesses in the three-part documentary, directed by Skye Borgman of “The Girl in the Picture” and “Abducted in Plain Sight” fame.

“It breaks me in a way that you’ve never felt,” says Ryan, 26. (He’s had his own, unrelated brushes with the law. Earlier this month, he was arrested on two counts of sexual assault in Arizona. The charges against him have since been dismissed without prejudice, which means authorities can refile them at a later date.)

Lori’s life first took a dark turn when she married her third husband, Joseph Ryan, in 2001. They welcomed Tylee in September of the following year. By then she’d already been married and divorced twice, once to her high school sweetheart in 1992, and then to Colby’s biological dad in ‘95.

Lori ultimately discovered Joseph had sexually assaulted Colby, then age 8. So, in 2006, she moved her kids from Austin, Tex. to start life anew in Chandler, Arizona. (Joseph Ryan died in 2018 of natural causes.)

There, she met Charles Vallow, a handsome and “financially secure” father of two sons from a previous marriage. She quickly took him on as husband No. 4.

He and Lori adopted JJ in 2013. The bright-eyed towhead was the biological grandson of Charles’ sister, Kay Woodcock. She and her husband Larry asked the couple to raise the boy, who was autistic, after their son, JJ’s father, proved ill-equipped for the job.

“I just loved him so much,” Ryan says in the doc. “And JJ loved Tylee.”

After adding the toddler to their fold, the seemingly idyllic family, which Lori ensured were active members of the Church of Jesus Christ of Latter-day Saints or LDS, relocated to Kauai, Hawaii.

“It was paradise,” says Ryan. “It was like pay-off for all the [bad] stuff that ever happened.”

“When Lori and I were alone … she’d complain about Charles,” says ex-friend April Raymond. “[She] really wanted a spiritual dynamo in a partner. And Charles, she felt, was holding her back. Her beliefs were becoming more extreme.”

Lori’s religious convictions grew even more bizarre after she met Mormon author Chad Daybell, now 54. The two first crossed paths at an LDS meeting titled “Preparing of People” shortly after she and Charles moved back to Arizona in 2018. By then, their marriage was on the rocks.

But during her first conversation with Chad, a father of five who’d been married to his wife Tammy for nearly two decades, Lori became smitten. Chad told her they’d been married several times in past lives.

He claimed to have gained supernatural capabilities after suffering two near-death encounters in the 1980s. And those spiritual powers allowed him to see into the future and prophesy the end of the world, which he said was slated for July 22, 2020.

“Chad’s vision was that there would be an apocalypse, [and only the] righteous would survive,” explains forensic psychologist John Matthias in the film. “And that there are 144,000 chosen ones, who would be saved … until the New Jerusalem was established and [they’d] carry on the work of God into eternity.”

Chad also touted that God had selected Rexburg, Ida., as His apocalyptical holy land, and claimed to have the power to detect “dark spirits” in others — namely in JJ and Tylee.

He maintained that the demonic forces would overtake their bodies, turning them into zombies that needed to be killed. He also thought that Charles was being overtaken by a demon. Lori’s brother, Alex Cox, ultimately shot and kill him.

Cops in Chandler, Ariz., where the shooting took place, deemed it an act of self-defense. No arrests or convictions were made.

After his death, Lori attempt to cash in on Charles’ $1 million life insurance policy. But, he’d previously removed her as the beneficiary, leaving her with nothing.

However, three months later, in October 2019, Chad’s wife Tammy mysteriously died. This time, Chad and Lori were able to collect her $430,000 life insurance policy. They flew to Kauai and got married. As a symbol of their love, Lori bought a sterling silver ring for herself from Amazon using Charles’ account and credit card information. She made the purchase several days before Tammy died.

Lori’s kids, however, weren’t in attendance at the wedding.

In fact, neither Tylee nor JJ had been seen by anyone for weeks.

Kay left Lori voicemails begging to talk to the child.

“Lori, please let us know JJ’s okay,” implores the grandmother in audio featured in the film. “We need to see him.”

Her pleas went unanswered. So Kay contacted authorities in Idaho, where Lori and Chad moved after getting hitched, for help.

When Rexburg detectives arrived at Lori’s residence to conduct a welfare check, she said JJ was away visiting a friend in Arizona.

Then, Lori and Chad fled to Kauai.

With no word from JJ in over two months, Kay and Larry offered a $20,000 reward for help in finding him and Tylee. Billboards and flyers plastered with the kids’ faces made national headlines.

In January 2020, an Idaho judge gave Lori, who was still in Hawaii with Chad, five days to produce her children to the public. She blew the deadline and was hauled off to an Idaho prison.

“The first time she called from the jail she said ‘The kids are fine,’” her mom Janis remembers. “She said, ‘You know what kind of mother I am. I would never hurt the kids.’”

“Those beautiful, talented, loving, generous kids had so much to offer and experience. I can’t think about them without crying,” Janis sobs in the doc.

Lori and Chad were both charged with murder and conspiracy to commit murder in the deaths of Tylee, JJ and Tammy. They are set to stand trial in January.