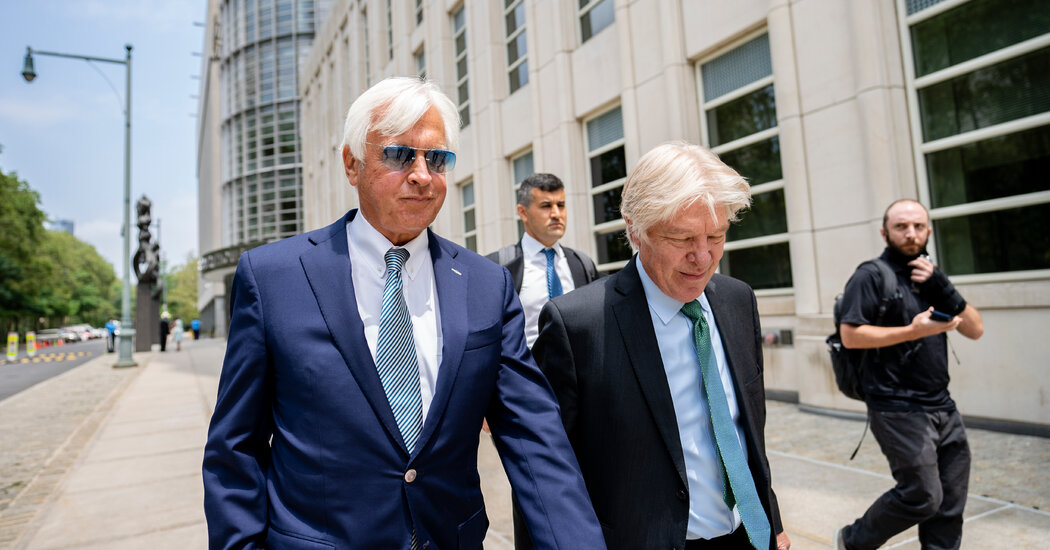 The embattled horse trainer Bob Baffert got bad news on Friday from two prominent corners of the horse racing world.

Churchill Downs warned horse owners that they were putting their Kentucky Derby dreams in jeopardy if Baffert continued as their trainer while he was still suspended as a result of Medina Spirit’s positive drug test after this year’s Derby.

And the New York Racing Association, determined to have the final word on who is allowed to compete on its racetracks, charged Baffert with “conduct that is detrimental” to the sport and “potentially injurious” to both horses and riders — its second attempt to suspend him.

The warning from Churchill Downs appeared to be aimed directly at Baffert and the horse owners who employ him.

Horses earn their way into the Derby starting gate by competing in a series of prep races in which points are awarded for top finishes. These “Road to the Kentucky Derby” races will begin in earnest on Sept. 18 at Churchill Downs and determine which horses earn one of 20 posts in the starting gate on the first Saturday in May.

“Points will not be awarded to any horse trained by any individual who is suspended from racing in the 2022 Kentucky Derby or any trainer directly or indirectly employed, supervised or advised by a suspended trainer,” the racetrack said in a statement.

Churchill Downs suspended Baffert for the next two Kentucky Derby races after Medina Spirit, this year’s winner, failed a post-race drug test. In effect, the track is telling Baffert’s high-powered owners that if they want to be guaranteed a place in the race, they should change trainers.

Lawyers for Baffert were not immediately available for comment.

The leaders of the Breeders’ Cup, a Super Bowl of sorts for horseplayers, have been loud proponents of drug-free racing. But many of its board members employ Baffert as their trainer.

Earlier this month, a colt called Pinehurst, trained by Baffert, won the Del Mar Futurity, establishing himself as a favorite in the $2 million Breeders’ Cup Juvenile. He is partially owned by the board members Gavin Murphy of SF Bloodstock and Barbara Banke of Stonestreet Stables.

A spokesman for the Breeders’ Cup said the organization had not decided whether it would allow Baffert to participate. Murphy and Banke were not available to comment.

Medina Spirit crossed the finish line first in the Derby on May 1, only to flunk a post-race test for a corticosteroid prohibited on race day. The result of what is known as America’s greatest horse race has since been contested in state and federal courts.

Lawyers for Baffert, the colt’s trainer, have asked for and been granted additional testing of the Derby sample. They hope to bolster their argument that the betamethasone found in Medina Spirit came from an ointment to treat a skin condition, not an injection to improve the colt’s performance.

NYRA’s action against Baffert on Friday marks its second attempt to suspend him since the Derby.

Baffert was suspended in May from Saratoga Race Course, Belmont Park and Aqueduct Racetrack. But Judge Carol Bagley Amon of the U.S. District Court for the Eastern District of New York overturned the suspension, ruling that Baffert had not been offered the opportunity to respond to allegations made against him.

Amon said that a prompt post-suspension hearing, where Baffert could have rebutted any claims against him, was required under the Constitution. But she said the racing association “had held no hearing — let alone a prompt one.”

The association said Friday it had established a hearing process that it said would allow trainers, jockeys and owners to receive due process.

David O’Rourke, president and chief executive of the association, said the new hearing rules and procedures would be used in the cases of Baffert and Marcus J. Vitali, a trainer facing a similar charge.

“NYRA has a responsibility to protect the integrity of the sport of thoroughbred racing,” O’Rourke said.

Last month, the Baffert-trained Gamine won the $500,000 Ballerina Stakes at Saratoga. Gamine is considered the fastest filly in the world; her lone defeat in 10 starts was a third-place finish in last year’s Kentucky Oaks.

Gamine was disqualified, however, after testing positive for the same drug that has put Medina Spirit’s Derby victory in limbo. The two violations were among five that Baffert racked up in 13 months.

Still, a possible Derby disqualification is months away and destined to be tied up in the courts for years. First, Kentucky racing officials will conduct a hearing and issue a ruling. If they disqualify Medina Spirit and either suspend or fine Baffert, he could appeal to the full state commission. If the unfavorable ruling is still not overturned, he could pursue a remedy in civil court.

In 1968, the Derby victory by Dancer’s Image was rescinded after a drug test showed the presence of a banned anti-inflammatory drug. It took four years before the horse was irrevocably disqualified.

Vitali, another trainer, faces similar charges and will have a hearing on Sept. 30 before Robert S. Smith, a retired judge of the New York Court of Appeals.

In the past five years, Vitali was “denied entry, ejected and/or had license applications denied by regulators of thoroughbred racing in Florida, Pennsylvania, West Virginia, New York and Delaware,” according to the charges, “and was sanctioned by the Jockey Club for violating a racing statute, rule or regulation relating to prohibited or restricted drugs, medications or substances seven times in a single year.”