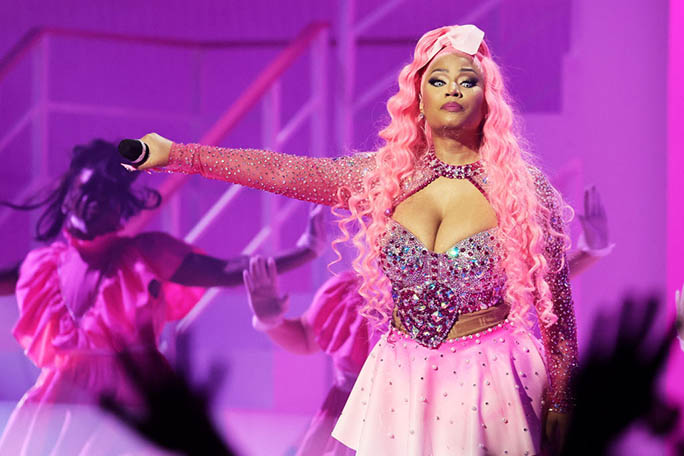 Nicki Minaj turned the 2022 MTV Video Music Awards into a pink party. In addition to receiving this year’s Michael Jackson Video Vanguard Award, the Queen of Rap delivered an iconic performance at tonight’s ceremony held at the Prudential Center in Newark, NJ.

The chart topping entertainer put on quite the show with a show-stopping medley of some of her biggest hits, including “Anaconda,” “Super Bass” and her new single, “Super Freak.” Minaj look pretty in a pink Barbie outfit before accepting the prestigious accolade.

The “Do We Have A Problem?” hitmaker wore a sparkling long-sleeve crop top bodysuit. The garment had a plunging halter-neckline and side cutouts on the bodice. Minaj teamed the striking top with a pleated mini skirt that was adorned with pearls throughout.

The “Moment 4 Life” stayed true to a Barbie aesthetic and styled her long pink wavy locs half up, half down with a large bow. To amp up the glam factor, Minaj went with sharp winged eyeliner and a pink pout.

When it came down to the shoes, “The Other Woman” actress tied her look together with black combat boots. The glittery silhouette had neon pink laces and a square heel.