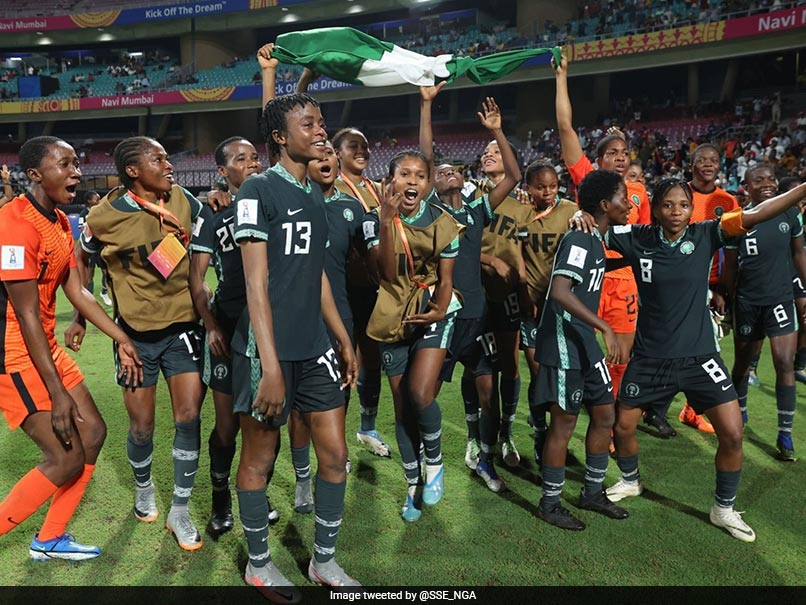 Nigeria had finished second behind Germany in Group B.© Twitter

Nigeria beat USA 4-3 in penalty shootout to become only the second African country to qualify for the FIFA Women’s Under-17 World Cup semifinals on Friday. The two sides were locked 1-1 in the regulation time of the quarterfinal match at the DY Patil Stadium, which was delayed by nearly two hours due to adverse weather conditions. The match, which was to begin at 4:30pm, started at 6:20pm IST. In an evenly-contested match, Nigerian Omamuzo Edafe’s 27th minute goal was cancelled out by Amalia Villarreal’s 40th minute strike for the Americans.

For USA, who had topped Group A to make it to the quarterfinals, Emeri Adames, Taylor Suarez and Mia Bhuta scored, while Emri and Jackson missed from the penalty spot.

It was heartbreak for the Americans, who finished runners-up in 2008. The Concacaf champions were considered to be a side which would go deep into the tournament. This was only for the second time, the first being in 2008, USA have gone past the group stage.

The Americans were playing the tournament for the fifth time, including third consecutive appearance.

Nigeria, on the other hand, made it to their maiden semifinal in their sixth attempt. The African champions had earlier lost thrice in the quarterfinals — in 2010, 2012 and 2014.

Ghana was the only African country to have made it to the semifinals — in 2012 — before Nigeria achieved the feat on Friday.

Nigeria had finished second behind Germany in Group B.