On Friday night, Olivia Rodrigo left Electric Lady Studio in New York City wearing a vintage inspired pop punk look reminiscent of a Y2K Avril Lavigne. Rodrigo has performed with Lavigne before and clearly loves the era’s fashion. The 19-year-old was wearing a bedazzled black t-shirt with cap sleeves over a pleated red plaid mini skirt that showed off her long legs.

She accessorized with black combat boots and carried a massive white bag over one arm with a smaller black bag on the other. Rodrigo had her gorgeous brunette locks in two long braids that draped over her shoulders. 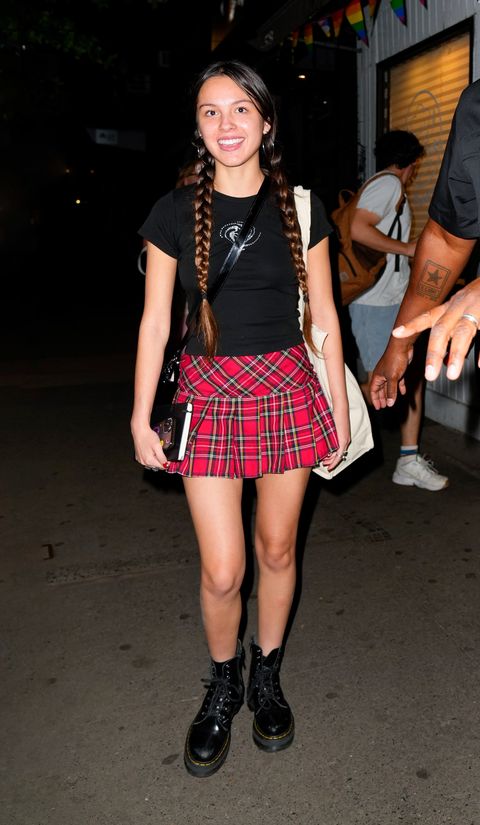 After leaving the historic recording studio, she joined her fellow musician and friend Daniel Nigro for dinner at Zumba. Rodrigo recently broke up with DJ Zack Bia, who she had been seeing for a few months this year. They were first connected to one another in February, and they were said to “really like each other,” according to a source speaking with People.

Another insider told E! News at the time, “He invited her to Super Bowl parties that he was DJing that weekend and she went to support him. They hit it off and have been casually hanging out… Zack [feels] that Olivia is really down to earth and he loves how low-key she is. It’s a good balance between them.”

The relationship supposedly ended because they had very different schedules and lifestyles, not because of any serious issues.

A source told Life & Style, “Their relationship sort of fizzled. They were casually dating but haven’t spent time together in a while. There were no issues — they both have different work schedules and different friend groups.”

Rodrigo’s hit album was largely inspired by a break up, so in an interview with British Vogue recently she was asked about how to get over one.

“Besides cutting off all contact, I think it’s important to not only forgive them, but forgive yourself for letting everything happen,” she said. “That’s what I’ve learned.”