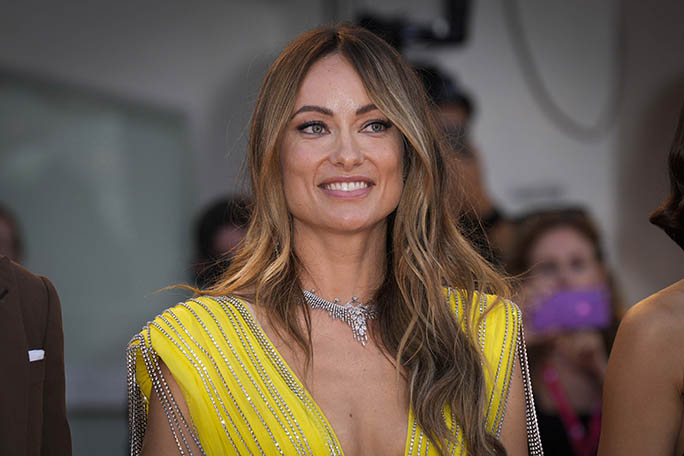 Olivia Wilde was a show-stopper while attending the premiere of her new film, “Don’t Worry Darling” at the 79th Venice International Film Festival on Monday. Wilde directed and stars in the thriller alongside Harry Styles, Florence Pugh, Chris Pine and Gemma Chan.

Wilde was decked out in Gucci for the star-studded event. The actress-turned-director appeared on the red carpet in a yellow chiffon gown that had a deep V-neckline and was overlaid with crystal embroidery, floor-length cape and dramatic ruffled hem. The “Booksmart” star topped her look off with diamond chandelier earrings, a silver choker necklace and several midi rings.

When it came down to footwear, Wilde completed her look with a pair of neutral platform sandals. The towering silhouette had strappy accents near the toe and was set on a rectangle heel that averaged about 3-4inches in height.

The 79th Venice International Film Festival previews upcoming films, with top Golden Lion awards heralded as predictors for the following Academy Awards. The 2022 ceremony, hosted by Rocio Munoz Morales, will run from Aug. 31—Sept. 10, with top contenders including “Blonde,” “White Noise,” “Bones and All” and “Don’t Worry Darling.” This year’s jury will be chaired by Julianne Moore, who is joined on the panel by Mariano Cohn, Leonardo di Costanzo, Audrey Diwan, Leila Hatami, Kazuo Ishiguro and Rodrigo Sorogoyen.