ON THE ROAD: Phil Brown returned to a side in freefall, but now he believes the only way is up

Phil Brown leans back in his office chair, his feet firmly back under the table at Roots Hall, and ponders the question: how did Southend United get into this almighty mess?

After four decades in the game, and three years after being placed on gardening leave by the club, he returned with six games to play last season. It was too late to save them and relegation ended Southend’s 101-year stay in the Football League.

‘When I came back, the club was stinking,’ Brown tells Sportsmail. ‘It was awful and had a horrible feeling and vibe to it.’ 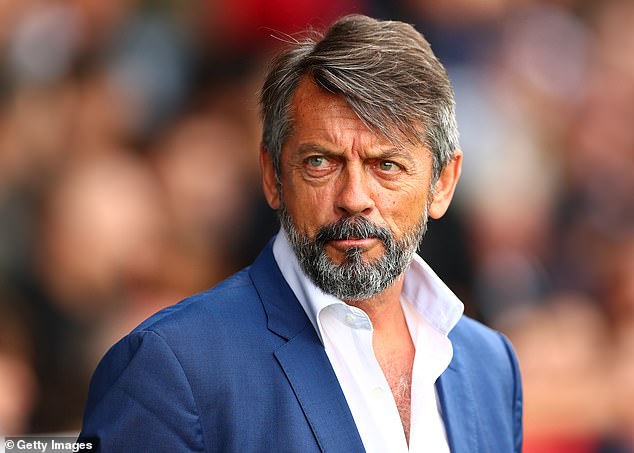 Phil Brown is back managing Southend United, who are now in the National League

While Brown was away, the club was dogged by poor managerial appointments, transfer embargoes, fragile finances, appalling recruitment and a lack of structure. Long-standing chairman Ron Martin brought in players on eye-watering salaries — by lower-league standards — in search of a return to the Championship.

The average wage of the squad crept up, which resulted in a budget the Shrimpers could not maintain. Players and staff were paid late. Winding-up orders were brought by HMRC.

Chief executive Steve Kavanagh left for Millwall in 2017 and has only recently been replaced, while fans wonder if Martin’s long-held desire to build a new stadium at Fossetts Farm has ultimately been detrimental to the club.

The transfer ban last season left manager Mark Molesley having to field a team of kids at times. A staggering 53 players featured in matchday squads.

When the embargo was lifted, it was tough to convince players to sign for a club in freefall and which had repeatedly failed to pay wages on time.

Matters have been just as bleak on the pitch, with back-to-back relegations following a seventh-placed finish in League One, a point shy of the play-offs.

‘Managers being at a club for a long period of time has an effect on its DNA — great examples are Sir Alex Ferguson and Arsene Wenger,’ explains Brown, as he tries to outline the reasons behind the on-pitch disasters. ‘Some good men followed me but couldn’t seem to raise a gallop with the team.

‘It’s down to somebody’s DNA being everywhere throughout the club. They try to convince players to adapt to a new style and it’s hard to motivate them.’

After all that, though, there is a hint of optimism that the only way is up for the Essex club. ‘This is right up there in terms of my challenges in the job, because I’m coming back to a club now in the fifth tier — but I’m relishing it,’ adds Brown.

‘There’s a lot of money in this division but more importantly there’s a lot of people who have good game-plans on and off the field. They aren’t trying to buy success but they have a good process of running clubs and know how to win games.

‘I want to bring that to Southend. We’ve got about 10 new players with a couple of loanees. So it’s a whole new football club. It’s still Southend United run by the same guy but the backroom staff are new, dynamic and diverse.’ 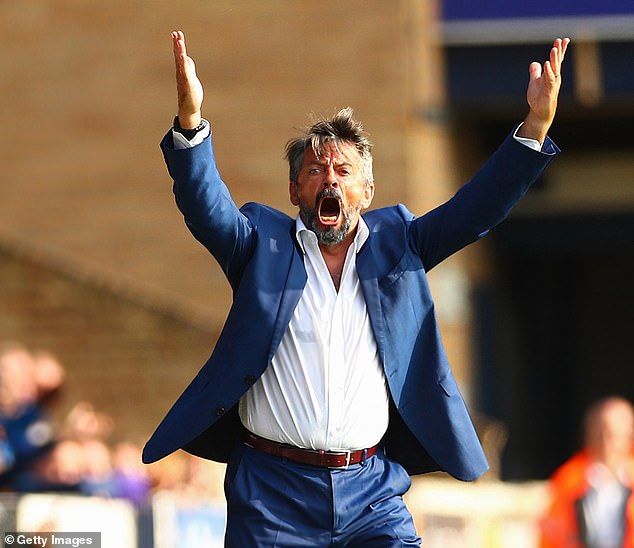 Sporting a fashionable but greying beard, Brown is every bit as passionate for the task at hand as he was in his Premier League days in the Hull dugout.

Animated as ever, he was aggrieved on Saturday as his side chucked away a 2-0 lead to draw at home to Hollywood-backed promotion favourites Wrexham.

Sam Dalby and Rhys Murphy scored for the Shrimpers but a second-half brace from Dior Angus saw Phil Parkinson’s Wrexham go home with a point.

The visitors are the focus of much attention due to their movie-star owners, Ryan Reynolds and Rob McElhenney.

Among the 581 in the away end is injured striker Paul Mullin, who dropped down two divisions after breaking the League Two scoring record at Cambridge.

The pull of Wrexham is the polar opposite to Southend. The Welshmen have also signed experienced long-throw king Ben Tozer from Cheltenham.

The Shrimpers could perhaps learn a thing or two from Wrexham, who know escaping this division is no easy task after 14 years at National League level.

Brown is optimistic his side are on the right path, though. ‘The group of players is not bad. The mentality wasn’t right but the technical side was OK when I came back,’ he says.

‘I love looking at the fixture list, thinking of all the grounds to tick off. Everyone in this division plays the right way. They’re not all crash-bang-wallop tactics.

‘This season’s target for me is to be in the mix at the business end of the season.

‘We’re going to have tough trips, places like Wealdstone where we’ve already drawn — it’s not pretty to play there but we have to come out against those sides. I’ll class it as success if we’re up there challenging.’

RICHARD KAY: Is this scandal too far for Michael Fawcett, the man Prince Charles can't do without?

At least 1 dead, 12 injured after ‘horrific’ shooting at Tennessee grocery…

Former U.S. Secretary of Defense testifies in court to being…