Please excuse any typos, I’m writing this while devouring the free snacks on JetBlue. An off-brand Cheese-It in the sky? That’s show business, baby. I’m jetting (in coach) back to my normal, sweaty, unfashionable life in L.A., where every single day I wear the same gray sweatsuit. I lie to people and tell them I have multiple: “No, literally I have one hundred of the same sweatpants and just change every day,” I’ll say. I’ve learned it’s important to keep up the appearance of regularly doing laundry…

But last night, I opted out of my beloved sweatpants for the first time in months and headed to LaQuan Smith’s fashion show. My boyfriend told me to get there 30 minutes early. He was like, “Fashion week is the craziest time of the year other than SantaCon. If you’re late, you might be turned away since you’re a complete unknown.” My first thought was, Okay, I’m dating an actual monster. My second thought: He’s right. He kept going: “Like, my family doesn’t even know your acting credits and they follow your career very closely. They have a Google alert for you but it never goes off.” Yeah, I got it. So, obviously, I got there 45 minutes early. I stood outside with the security guards who were just arriving to their shifts. They were really hot and their suits fit perfectly. LaQuan, did you tailor…their suits? I showed one of them my ticket and he smiled politely, “Um, they’re not letting anyone in yet. You still have 42 minutes.” Yeah…

I milled around outside the venue, somehow still nervous I was in the wrong place, and scared that the concealer I used from a Sephora tester had worn off. But soon enough, people started to show up in the sickest outfits I’ve ever seen. Instinctually, I held my phone up and pretended to be on a call. (It’s my fight or flight.) These people were just too perfect to look in the eye. They strutted through the doors in metallic stilettos, bodycon dresses, and micro skirts with matching bralettes. 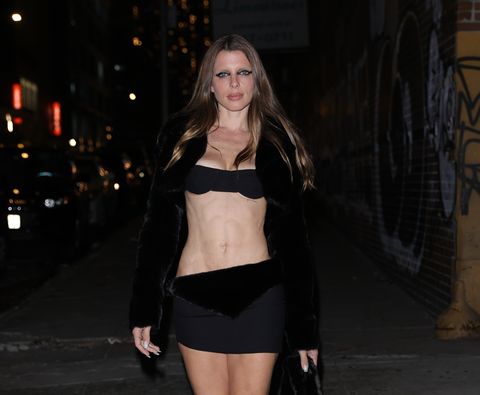 If there’s one truth of the modern world that I hold to be self-evident, it’s this: hot people are mean. When you look that good, you must have an ego, especially at fashion week. It’s all about who you know, who you’re wearing, and who invited you. I approached these people anxiously, like how a child might approach a stunning tigress at the zoo. I wanted to look closer, but not so close that I’d get bitten. But as I talked to more and more people, I noticed something weird…so weird it seemed to break every known rule of the social world. The guests were smiling, friendly, and humble. They had abs for days and didn’t even seem to notice. They were surrounded by this radiant glow, similar to ego but totally different. Was it…confidence? Oh my God, I think it was. I started to feel better.

I walked inside, and immediately was thrown into a photograph with none other than icon Miss Julia Fox. I could only manage to mumble “me?” and “are you sure?” before the photo snapped. So somewhere out there on a photographer’s camera is a picture of me and Julia Fox. Please, sir, if you see this, release it, tag her, post it, sell it, do whatever you have to do. I need to show my parents.

The show started. The lights dimmed, and the place blasted the best music I’ve ever heard. The first model strutted out, wearing a neon pink cutout corset top with a matching skirt. A long blonde ponytail bounced behind her. The crowd went wild. “TEAR IT UP!” “YOU BETTER WALK!” “THAT FIT IS SICKENING!” And it really was. I had chills. 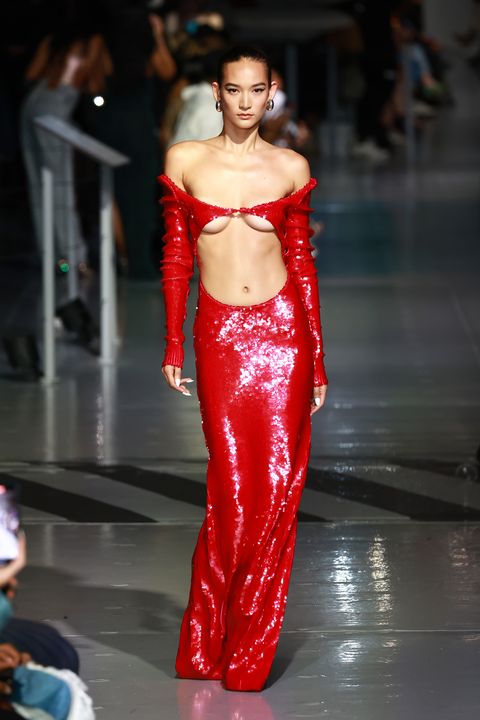 The high only continued. Winnie Harlow! C’mon, so gorg! Every single model killed it. I was hoping for one flop (I love the drama), but nothing. They all slayed. And the clothes were fit to perfection. The most gorgeous deep blues and purples, burnt oranges, metallic accents, sequined everything. One of my faves was a bright red gown with a plunging boatneck and a massive circular cutout exposing the entire stomach. You could almost see nip. It was amazing. If I worked in an office (lol), that’s what I would wear. I would wear that to meet my boyfriend’s Orthodox family. If Biden called, you know, wanting a meet-and-greet, I would probably wear that. It’s an everyday look! Honestly easy. Versatile!

LaQuan also did this beautiful thing where he seamlessly incorporated metal breastplates and bras into minimal black cocktail dresses. It was very Tom Ford for Gucci. A reference? We love. When the show finished, I clapped so hard, hoping that they were playing by concert rules and I could somehow make an encore happen. Whip up another dress! No, seriously, quick! 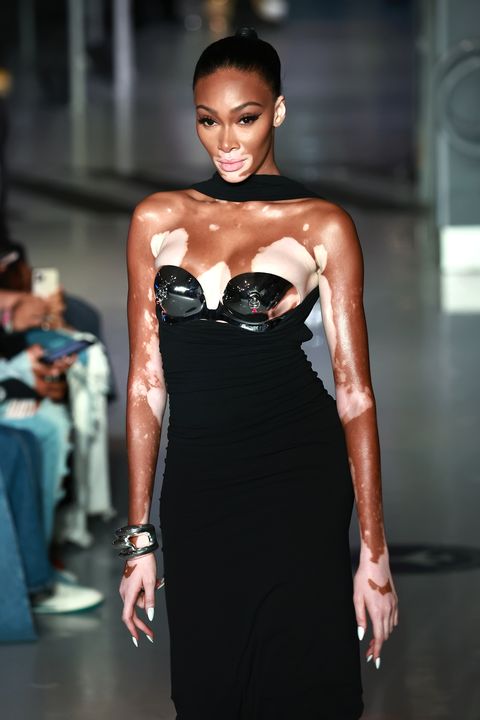 The show was such a confidence booster. I showed up thinking I might be out of place, and walked out knowing I was Gigi Hadid (it’s not not true). I strutted out of the Intrepid like I had a car waiting for me and somewhere chic to go. I did not, and it was raining. But I didn’t care. I sashayed 40 blocks downtown in the pouring rain with the confidence—or, as the French say, Laquanfidence, of a model in red sequins.

I kept strutting until I got to my hotel, took off my wet clothes, and got into bed. When the adrenaline finally wore off somewhere around episode four of Selling the OC, I felt a stinging sharp pain in my leg. What the actual hell? Okay, I think I pulled something strutting my heart out. Worth it.

Owen Thiele is an actor based in Los Angeles. He has studied at the Upright Citizens Brigade, Second City, the Lee Strasberg Theatre & Film Institute, and the Meisner Institute. Most recently, he wrapped production on the comedy Theater Camp starring alongside Ben Platt and Molly Gordon. He can also be seen opposite Kat Dennings in season 2 of Hulu’s Dollface.