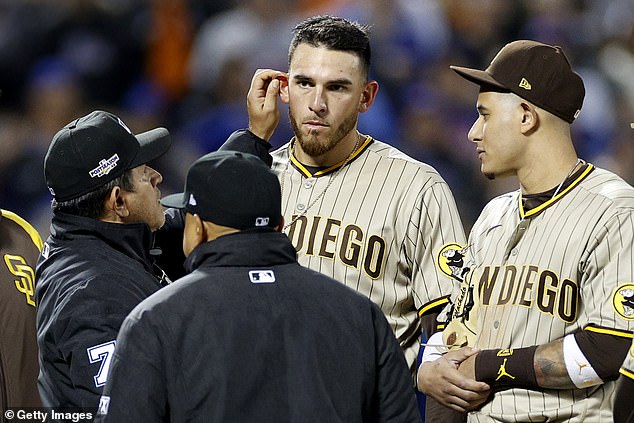 By Isabel Baldwin For Dailymail.Com

The Padres were stifling the Mets with a 4-0 lead during the sixth inning in the third game of the wild-card match up when Showalter called for the check. Musgrove had thrown five shutout innings to that point, allowing just one hit.

Before Musgrove could throw his first pitch if the inning at Citi Fields, Showalter emerged from the Mets dugout at the start of the bottom of the sixth and spoke with first-base umpire and crew chief Alfonso Marquez.

The umpires convened and talked, then called over Padres manager Bob Melvin as they gathered around the pitcher.

The umpires checked the pitcher’s hand and glove, before he removed his hat and then they checked his ears.

However, after a thorough search, the officials found nothing and cleared Musgrove to remain on the plate. 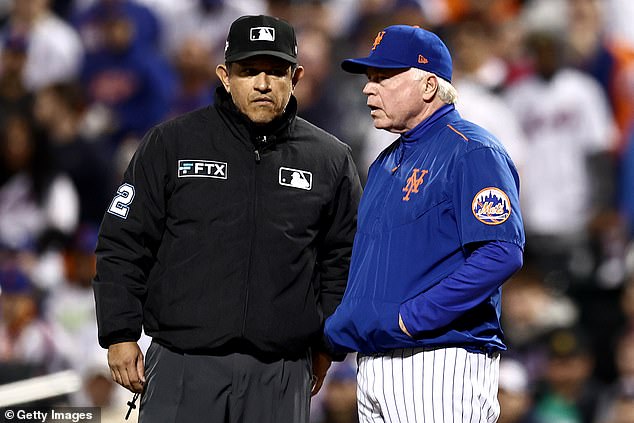 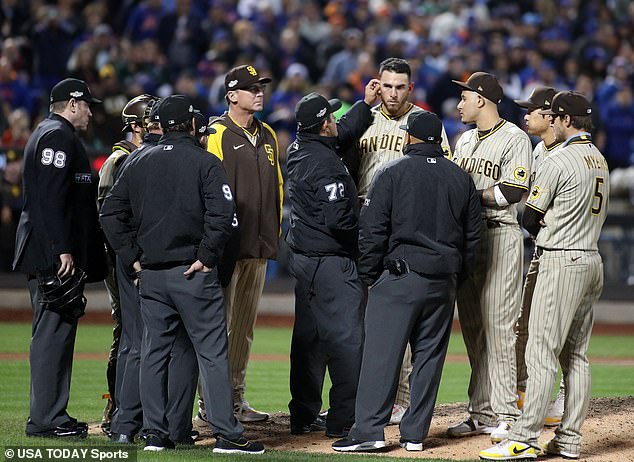 As Musgrove was left to continue on he mound, Padres third baseman Manny Machado smirked towards the Mets dugout.

Musgrove’s ears had reportedly looked shiny all night and Mets fans and social media users had grown convinced that he had something on them.

His spin rate was up from their usual rates, per Baseball Savant, and his velocity has also been higher, as he seemed to be going to his ears between pitches.

Some suggested he could be using a sticky substance to help his grip and spin rate on the ball. However, it is a possibility that Musgrove had just been sweaty. 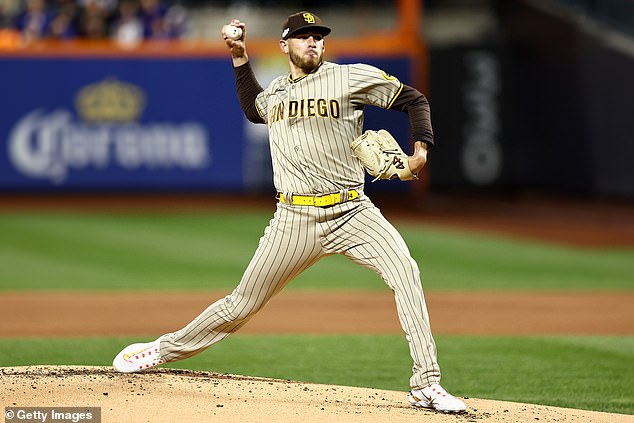 As the saga unfolded, Brewers outfielder Andrew McCutchen shared his own theory on Twitter as he believed Musgrove ‘has Red Hot on his ears.’

McCutchen tweeted: ‘Pitchers use it as mechanism to stay locked in during games. It burns like crazy and IDK why some guys thinks it helps them but in no way is it ‘sticky.’ Buck is smart tho. Could be trying to just throw him off.’

In the first inning, Showalter had also been spotted checking the baseballs that Musgrove used.

After striking out Tomas Nido in the sixth and another scoreless inning for the Mets, Musgrove gestures to the New York dugout. He swiped to fingers under his nose and sniffed.

As he later made his way off the mound, he also pointed to his ear and yelled to his rivals’ dugout.

The Mets home crowd could be heard chanting ‘cheater’ at the pitcher throughout the inning.

Musgrove continued his dominance at the mound as he only allowed the Mets one hit during the entire game on the Padres’ route to a 6-0 win.

Following the Padres’ win, Musgrove’s teammates appeared to see the funny side as they surrounded him in the Padres’ clubhouse and soaked his ears in a liquid substance, according to The Athletic’s Rustin Dodd.

AJ Cassavell also reported that Manny Machado approached Musgrove with a bottle of champagne in hand and yelled, ‘Hey Joe,’ ‘I got that sticky stuff right here,’ and then doused Musgrove with Brut.

After the win, Musgrove revealed he had a massage before the game and said: ‘It could’ve been lotion or it could’ve been anything. But they checked, they found nothing.’