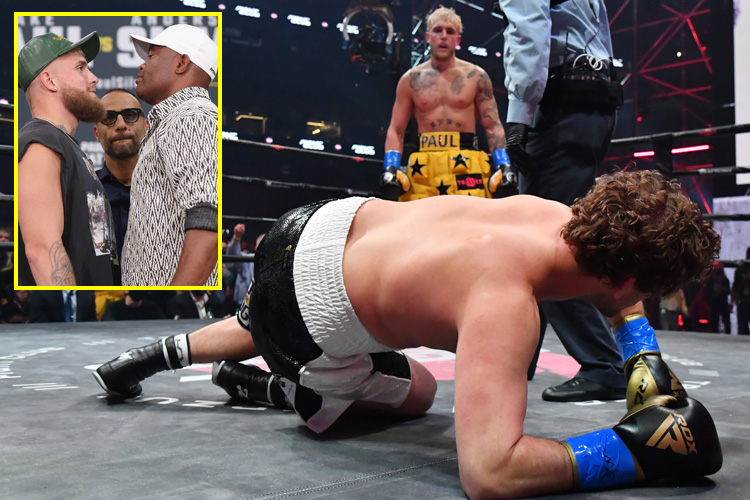 Ben Askren has a unique take on the upcoming fight between Jake Paul and Anderson Silva after fighting the YouTuber last year.

The former Bellator and ONE Championship titleholder ended his retirement from combat sports to make his boxing debut against Paul, who stopped him inside one round.

Askren was known for his elite-level grappling skills and distinct lack of striking ability during his MMA career, which ended after an exciting UFC run.

However, when he was matched against ‘The Problem Child’, many expected Askren to upset the odds as he had fighting experience unlike anyone else on Paul’s CV.

After suffering a loss to the former Disney actor, Askren retired again and sat back to watch his long-time friend Tyron Woodley – who he admits is a much better striker – try to beat Paul.

The former UFC welterweight king suffered a controversial split decision defeat against Paul, who knocked him out cold in a rematch a few months later.

While Askren was obviously gutted to see his pal lose, he also admits that the fact Paul was able to beat such a talented striker, makes him feel better about his defeat to the 25-year-old.

“I was really disappointed when Tyron lost. As far as it looks on me, it actually looks alright because Jake Paul is significantly better than we thought he would be,” he told talkSPORT.

‘Funky’ has similar feelings ahead of Paul’s fight with ‘The Spider’ who is regarded by many as the most talented boxer to ever grace the UFC Octagon.

“Part of me would like to see him [Jake Paul] get beat up,” Askren admitted.

“But if he does well it’s like, ‘Okay, I was clearly out of my league when I said yes.’ So, the expectation of me goes lower, which is fine.”

Whatever happens, Askren says he’s not particularly interested in the fight that is being billed as the toughest test of Paul’s career because Silva holds a boxing win over former WBC middleweight champion Julio Cesar Chavez Jr.

“I don’t really care that much,” he added. “I don’t think I’m even going to buy the pay-per-view. I think it’s probably unlikely. I have no idea what to expect in this one, I guess we’ll see on Saturday.”

Ben’s book, Funky is out now everywhere books are sold that would be great. You can get it here: https://permutedpress.com/book/funky-my-defiant-path-through-the-wild-world-of-combat-sports