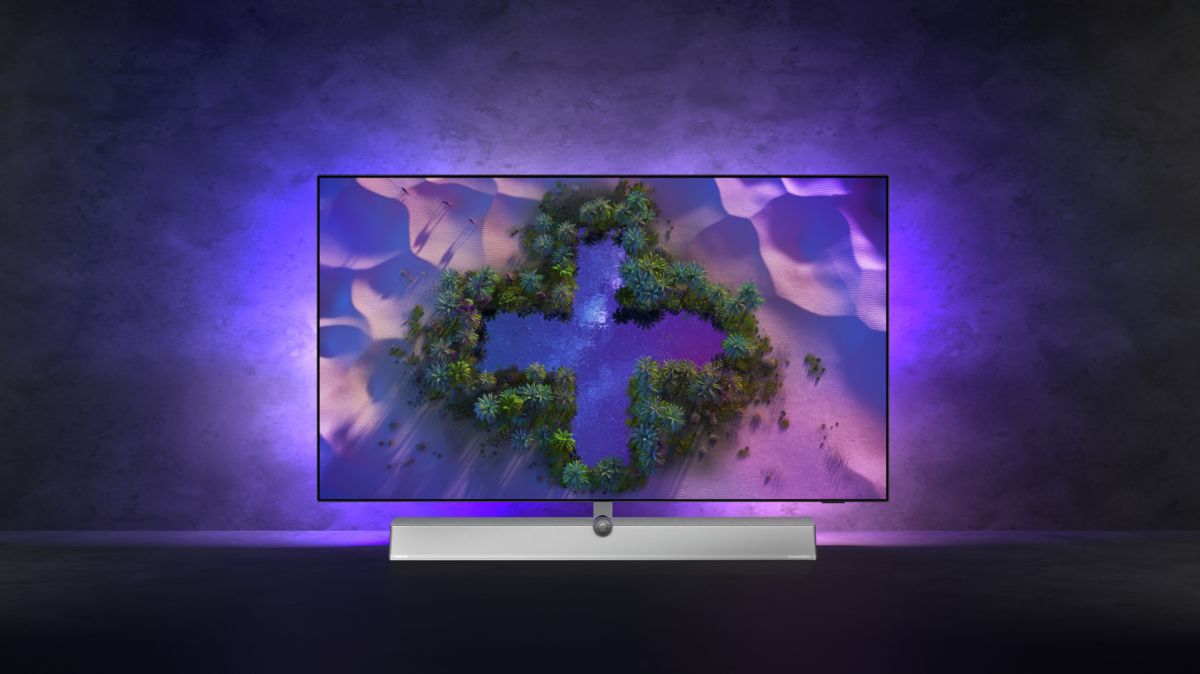 If you want great picture quality and little else then buy an LG OLED TV. If, however, you want something extra and are willing to pay for it then head for one of Philips’ fully-featured OLED TVs. One of the more affordable high-end OLED TVs in its arsenal, the OLED+936 – available in 48-inch, 55-inch and 65-inch – uses the latest and greatest higher brightness ‘evo’ OLED panel, but has a lot more going for it than premium picture quality.

Yes, colors are luscious, motion is smooth and blacks are as deep as you would ever need them to be. However, the OLED+936 has three things that your average OLED TV does not – a brighter panel, a built-in Bowers and Wilkins speaker stand and Philips’ dazzling Ambilight system.

The star of Philips’ sub-flagship 9-series, the OLED+936 is the successor to the OLED+935 and its speaker stand features upgraded amplifiers, a better Dolby decoder and subwoofer. If its audio is incredibly impressive, so are its images. Its panel – the brightest OLED can offer – features excellent contrast and black levels while also showing brighter highlights, and all within the same image.

Cue the other attraction, Ambilight, which sprays dynamically-changing colors around your room that match what’s showing on-screen.

We also loved how it automatically identified HDR – every single flavor of it – with special picture modes on offer, notably Dolby Vision Bright, Philips’ own slightly tweaked, brighter version of the picture standard.

Yes, it takes some twiddling with picture menus – which aren’t that easy to find quickly – but the OLED+936 is capable of hugely cinematic images that sit at the top table of OLED TV picture performance.

Cut to the chase

The OLED+936 looks like a picture, from its brushed steel materials to the way it uses the integrated Bowers & Wilkins speaker in conjunction with a bracket on its rear as a desktop stand. That speaker itself is covered in fabric and has a tweeter-on-top design that lends it an instantly iconic look.

The only issue is that the four-sided Ambilight is slightly wasted if you leave it on a surface; only by wall-mounting the OLED+936 – using the VESA wall bracket in the box – can you truly get the full Ambilight experience.

Around the back are four HDMI 2.1 inputs – two ARC-compatible on the side and two on the rear (one of them eARC-ready for Freesync, variable refresh rates (VRR) and automatic low latency mode (ALLM), though 4K 120Hz gaming comes only in half-resolution) alongside three USBs, Ethernet LAN, satellite and RF inputs, and outputs for optical audio, headphones and a subwoofer output.

Philips uses the slightly dated Android 10 operating system for TVs, though it’s as slick as you like on the OLED+936. Amid lots of color there’s a bevy of the most popular apps built-in out of the box, including Amazon Prime, Netflix, Disney Plus, YouTube, Apple TV Plus – all in 4K – as well as BBC iPlayer, ITV Hub, Rakuten TV and many more. If you sign in to a Google account you’ll also get access to the Google Play for Android TV app store, allowing you to download apps (there’s 16GB of storage to play with).

In practice we did have a slight issue with the OLED+936’s selection of apps, which didn’t initially include Disney Plus. That issue was solved by a factory reset of the TV, but during our review we also lost sight of the Spotify app.

For any streaming app you do sign in to – such as Amazon Prime, Disney Plus, Netflix or BBC iPlayer – you get recommendations in the form of a ‘content discovery’ section by scrolling down on the main screen.

Although the apps are front and centre on the OLED+936, we did have a few problems with picture, sound and Ambilight settings. While the major streaming apps allowed us to make tweaks during playback (albeit while pausing the on-screen action), some apps – notably the BBC iPlayer – didn’t allow us to do anything. Call up the Quick Menu while in some apps and the set simply returns to the home screen. It all looks very polished, but there are obviously a few bugs left in the user interface.

The OLED+936 has as bright an OLED panel as exists so far – what LG call ‘evo’ as used in its LG’s Gallery Series – and it shows. Its fifth-generation P5 AI picture engine of video processing options – here beefed-up with two chips – cover motion, contrast, sharpness, source detection and color. In practice the OLED+936 doesn’t exactly struggle with any of those columns of picture quality.

The P5 automatically detects what you’re watching and tailors the picture settings available. Give it a movie and it offers you Filmmaker Mode, which is completely devoid of any kind of motion or blur-reducing frame interpolation tech. Some users will love this as-the-director-intended mode, but we think most will prefer the smoother, more colorful Home Cinema Mode.

Seeking to take full advantage of its brighter OLED panel, the OLED+936 has a light sensor that measures ambient light levels and makes adjustments to the image automatically. That tech also contributes to its HDR10+ Adaptive mode, which kicks in when HDR10+ is detected (which, let’s face it, won’t be very often) and makes fine adjustments in real-time. We also loved using Dolby Vision Bright mode, Philips’ own tweaked version of Dolby Vision, which brightens and slightly sharpens HDR images.

Does a brighter OLED panel mean less impressive black levels? It doesn’t appear to, with the OLED+936 pushing out brighter highlights all over the screen while also producing truly deep blacks. It makes not only for a thoroughly dynamic image, but one that’s lusciously and subtly colored.

Crucially, if you play with the picture settings (a lot) you can create perfect skin tones while retaining eye-popping color and contrast. That said, we switched off a lot of Philips’ processing options, including Colour Enhancement and Ultra Resolution.

The OLED+936 doesn’t have much of a issue with motion blur, but OLED tech isn’t as immune to the problem as some would have you believe. Motion Styles is best left on the Standard setting, which removes the slight motion blur inherent in the Movie preset, but there’s no reason to jump up onto the more powerful Smooth mode.

Nor is there much need for the dedicated Fast Motion Clarity frame interpolation tech, which is best left on its weakest setting. On stronger settings it didn’t significantly improve anything while making some footage – notably slo-mo replays during some FA Cup matches broadcast on BBC 1 HD – feature a watery halo around both a slow-spinning ball and the players.

Although it upscales SD and HDTV sources supremely well, the OLED+936 proved less impressive in other areas when dealing with standard TV duties. For example, our review sample couldn’t consistently identify a connected set-up via HDMI or create a shortcut to it on the Home page.

Nor did it prove possible to make changes to the picture or audio settings while watching the BBC iPlayer app; any attempt to do so and the app shut down. If you make changes to the picture or sound settings during a movie on any of the major streaming apps the movie is paused. However, these are small issues that will hopefully be fixed by upcoming firmware updates.

Whether you choose to wall-mount the OLED+936 or not, its Bowers & Wilkins speaker stand is an integral part of its design and its overall appeal. It acts as the set’s desktop stand if you put the OLED+936 on a TV table, but stays right where it is if you wall-mount (using the VESA mount in the box) and simply extends outwards from the wall.

This 70W, 3.1.2-channel speaker is a thing of wonder. We tried it with various pieces of music from various sources – from hi-res lossless files on a USB stick to compressed music over DAB radio – and always got precision, depth and plenty of bass within a wide, warm and well-balanced soundstage. Compared to the previous OLED+935 it’s got upgraded amplifiers, a better Dolby decoder and an improved subwoofer, and it shows.

In Movie Mode its left, right and centre channels deal well with the orchestral music of Star Wars: Rogue One on Disney Plus in Dolby Vision and Dolby Atmos, throwing it into the room impressively, though we weren’t convinced that the upfiring speakers were producing many height effects other than the lifting of dialogue to the centre of the screen (itself important on a 65-inch panel). Either way, the soundstage is wide, balanced and packed with delightfully intricate details.

The left-right stereo Music Mode showcases the speaker stand’s prowess with bass, which is smooth and distortion-free, yet never dominates the mix. Yes, you can add a subwoofer to the OLED+936 and many will, but we’re really not convinced it’s necessary. Meanwhile, Dialogue Mode is handy for watching TV, partly because Movie Mode tends to make voices rather indistinct.

What the speaker stand does lack – like the TV itself – is ultimate usability. For example, it proved impossible to make any audio tweaks while listening to music through the BBC Sounds app on the OLED+936. That meant we were unable to switch from Movie Mode to Music Mode. The OLED+936 badly needs shortcuts on its remote to make it easier to toggle through its audio modes. Something we also noticed when using a set-top box connected via HDMI to the OLED+936 was a slight lip-sync issue.

Do all flat TVs have to have terrible speakers? Only if you let them, as Philips proves here. The speaker stand under the OLED+936 is incredible and a great additional reason – if you needed one – to invest in it.

You want the best OLED can offer
With its extra-bright OLED panel the OLED+936 barely puts a foot wrong with image quality, offering luscious black levels, bags of detail and exquisite colors across the entire screen.

You want awesome audio
The Bowers & Wilkins speaker stand is excellent, supplying 70W of 3.1.2-channel sound that impresses in precision, depth and bass across movies and music. Aside from a one-click cable around the back of the TV there are no cables or mess to worry about, as with third-party soundbars.

You need HDR streaming
Philips is unique in supporting every flavor of HDR going, from HDR10 and HDR10+Adaptive to HLG and Dolby Vision. That means you can get the very best quality from the likes of Amazon Prime, Netflix and Disney+.

You already have an excellent soundbar
Although we love the built-in, integrated design of the Bowers & Wilkins speaker stand, there’s no escaping the fact that those who are perfectly happy with their existing soundbar will merely be replicating components by going for the OLED+936. Ditto for those with a surround sound speaker set-up.

You like watching in a total blackout
One of the main attractions of the OLED+936 is that it comes with four-sided Ambilight – Philips’ own bias-lighting system – which covers your living space in bright colours. It’s definitely worth trying out before you buy, and in any case it can be easily deactivated, but it’s one of the core reasons to buy a Philips TV.

You need to find the best value OLED TV around
The OLED+936 is not a cut price TV. You’re paying as much for style, design and build quality as you are for picture quality, with the integrated Bowers & Wilkins speaker stand, faux leather-clad remote control and Ambilight system all luxurious extras.