By Alastair Talbot For Dailymail.Com

Game 3 of the World Series between the Astros and the Phillies on Monday has been postponed due to rain in the Philadelphia area, MLB confirmed.

Tied at 1-1, the series’ first game at Citizens Bank Park has been rescheduled for Tuesday at 8.03 p.m. ET.

The other remaining games of the Fall Classic will all also be pushed back one day, preserving the travel day, which was originally scheduled for Thursday and will now take place on Friday.

Chances of rain in the city of Brotherly Love increase significantly around game time (8 p.m.) 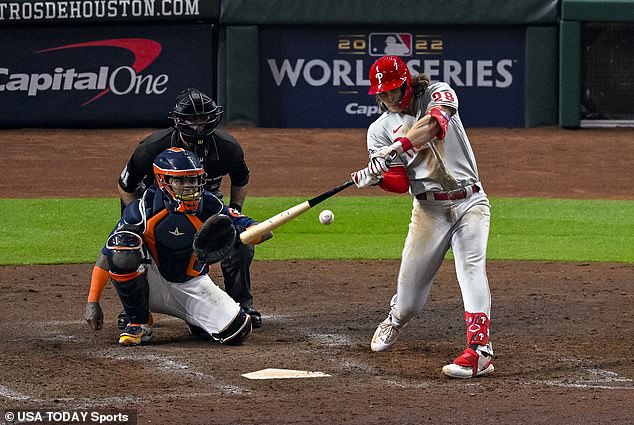 Officials met at 6.45 p.m., less than 90 minutes before the start of the game, before commissioner Rob Manfred finally confirmed the move.

The two clubs, currently locked at 1-1 after two games played at Minute Maid Park, met with MLB officials at 5 p.m., three hours prior to the matchup at Citizens Bank Park at 8.03 p.m. ET, but no decision was made at the time.

Several weather reports from the Weather Channel indicated that there was an 85 percent chance of showers by the time the game starts.

MLB takes weather-related decision on a day-to-day basis in the post season and the league’s stance is to prioritize playing through nine innings with no interruptions.

The league also prefers to not kill any momentum happening during the ball game, as they want to avoid forcing players to sit. It also cares about its viewership ratings, hence its reluctance to resume game action late at night at an inconvenient time for Americans, particularly on the east coast.

However, for the rescheduled game on Tuesday, rain is also on the agenda though at a lesser chance at 43 percent, according to AccuWeather.

However, the rescheduling has affected the Phillies’ pitching plans.

Ranger Suarez, who was supposed to take to the mound in Game 4 will now start the rescheduled Game 3.

Meanwhile. the Astros are sticking with their pitching plans. It was thought that Justin Verlander could start Game 4 with the extra days rest after pitching in Game 1 but Dusty Baker is sticking with Christian Javier and sending Verlander out in Game 5.

The Phillies have already experienced rain during this year’s playoffs after playing against the San Diego Padres in heavy showers at times in the NLCS’ Game 5. The contest between both teams started on time and the game was not interrupted once. 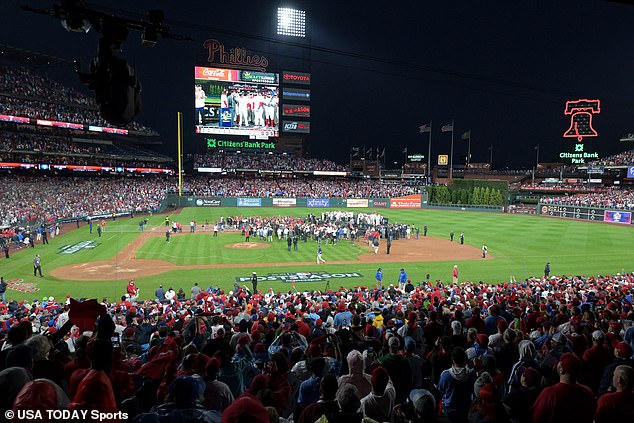 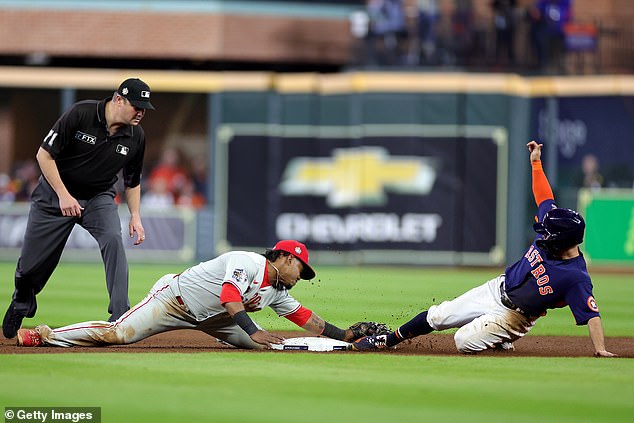 In the ALCS, however, the Guardians the Yankees had to postpone Game 5 due to heavy rain in the New York City area. Game 2, though, was played in light rain in Cleveland.

Philadelphia has already been subjected to weather fiasco during a World Series in the past, coincidentally when the Phillies won it in 2008 against the Tampa Bay Rays. Game 5 was put on hold in the middle of the sixth inning, just when the Rays had tied the score 2-2.

The Phillies went on to win the series, four games to one, but then-commissioner Bud Selig had announced a rule that all World Series games must be completed in one sitting.