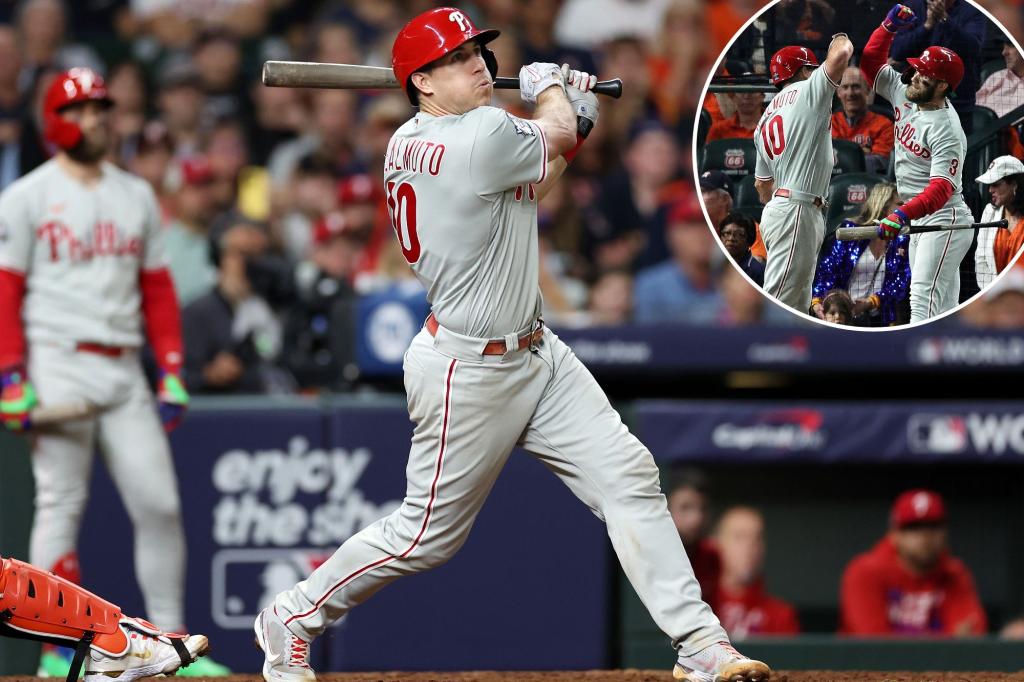 HOUSTON — Of all the Phillies’ victories in this improbable postseason run, the one Friday night may have been the unlikeliest.

Buried in an early five-run hole against presumptive AL Cy Young award winner Justin Verlander, in the hostile confines of Minute Maid Park, the Phillies scrapped. And then thunder struck in the top of the 10th inning.

J.T. Realmuto’s shot to right field off Luis Garcia carried just beyond Kyle Tucker’s outstretched glove for a home run that sent the Phillies to a 6-5, 10-inning victory over the Astros in Game 1 of the World Series.

The Astros, playing in the Fall Classic for the fourth time in the past six seasons, still haven’t won a Game 1 of the World Series. The loss was their first in eight games this postseason.

The Phillies, who entered the playoffs as the No. 6 seed, have knocked off the Cardinals, Braves and Padres this postseason, and now stand within three victories of the franchise’s first World Series title since 2008.

David Robertson got the final three outs to complete a huge bullpen performance for the Phillies, who received 5 ²/₃ scoreless innings of relief behind Aaron Nola. All told, the Astros went the final seven innings without scoring. Houston had runners on second and third in the 10th, but Robertson retired pinch-hitter Aledmys Diaz to end it.

The Astros nearly won it in the ninth, but Nick Castellanos’ sliding catch on Jeremy Peña’s bloop prevented Jose Altuve from scoring the winning run from second base. Altuve’s bloop single to center off Seranthony Dominguez and steal of second with two outs had put the pressure on the Phillies.

Verlander was gifted a five-run lead in the third inning but couldn’t hold it. The Astros ace departed after five innings with it tied 5-5; he allowed five earned runs on six hits with five strikeouts and two walks. The future Hall of Famer owns a 6.07 ERA in eight World Series starts. His teams, Detroit and Houston, have won just once in those starts, while Verlander is 0-6 with two no-decisions, including Friday.

The Astros received most of their offense from Tucker, who homered twice and drove in four runs. Realmuto finished with three RBIs in leading the Phillies’ offensive attack.

Tucker homered leading off the second inning for the game’s first run. The Astros kept going in the inning, with three singles against Nola, the last of which, by Martin Maldonado, drove in a run. Before it could get too messy, however, Altuve hit into an inning-ending double play.

Tucker’s second homer of the night, a three-run blast in the third, extended the Astros’ lead to 5-0. Peña, the ALCS MVP against the Yankees, continued his strong October with a leadoff double. Alex Bregman walked after Yordan Alvarez’s infield single was overturned into an out, and Tucker crushed a 95-mph fastball to become the first Astros player in franchise history with a multi-homer game in the World Series.

Verlander retired the first 10 batters he faced before the Phillies rallied against him in the fourth. Rhys Hoskins, Bryce Harper and Castellanos all singled — the last of those drove in a run — before Alec Bohm’s two-run double sliced the Astros’ lead to 5-3.

The Phillies returned to sea level in the fifth on Realmuto’s two-run double. Brandon Marsh doubled just inside third base to start the rally and Kyle Schwarber walked before Realmuto delivered a smash off the left-field fence that tied it 5-5.

Nola lasted 4 ¹/₃ innings and allowed five earned runs on six hits with five strikeouts and two walks. It was a second straight subpar outing for the right-hander, who surrendered six earned runs over 4 ²/₃ innings in Game 2 of the NLCS against the Padres.

Hector Neris entered with the bases loaded and two outs in the seventh to strike out Castellanos. The Astros received 1 ²/₃ innings of scoreless relief from Bryan Abreu, who allowed an infield single to Schwarber in the seventh before walking Realmuto and Harper to load the bases.

Phillies manager Rob Thomson didn’t hold back on his bullpen usage, deploying lefty Ranger Suarez (his possible Game 3 or 4 starter) to get the final out of the seventh and one out in the eighth.