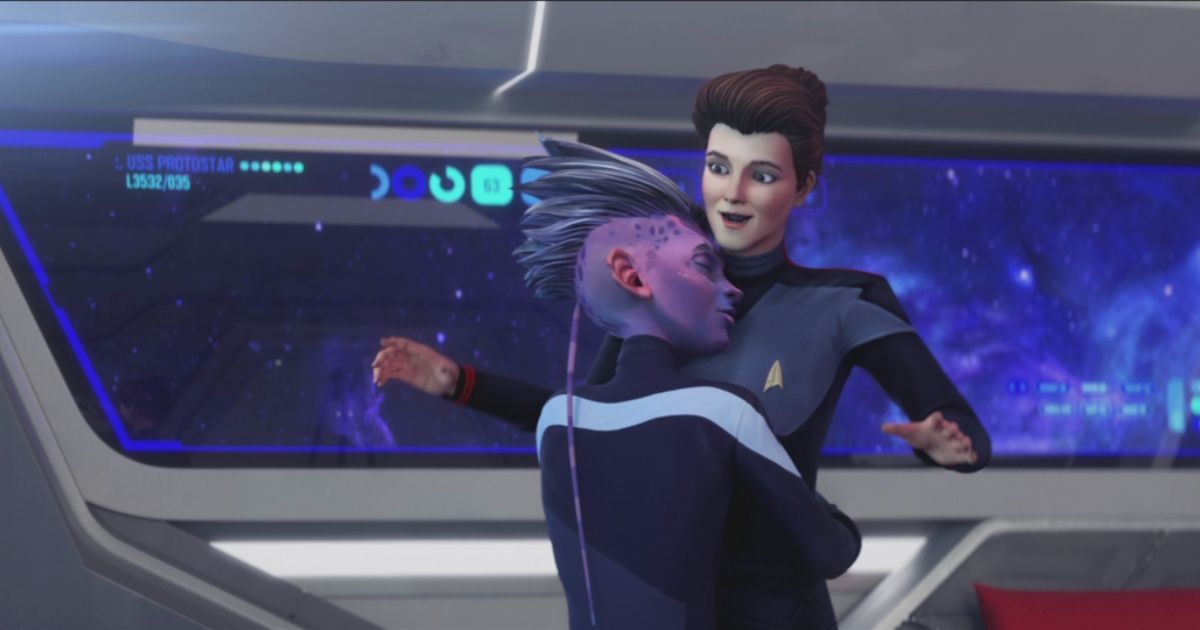 One of the biggest mysteries of Star Trek: Prodigy, the nature of the origin of Captain Del Re’l (Brett Gray), is beginning to unfold! In the midseason premiere, Season 1, Episode 11, “Asylum,” the crew of the Protostar arrives at Comm Relay station CR-721. Once there, and at the behest of Lt. Jr. Grade Barniss Frex (Eric Bauza), they each submit to a DNA scan in order to begin their conscription into Starfleet. However, when the scan gets to Dal, some very interesting information is revealed!

Before Dal is scanned, several other members of the crew undertake the procedure. This includes Rok-Tahk (Rylee Alazraqui), who is confirmed to be Brikar. This species was once the providence of Memory Beta, as they had previously only been depicted in the pages of Star Trek tie-in novels, having made their first appearance in Star Trek: The Next Generation: Starfleet Academy #1: Worf’s First Adventure by Peter David.

Also scanned is Jankom Pog (Jason Mantzoukas). This doesn’t give the audience much new information, because we all already knew Pog’s species: he’s an easily recognizable Tellarite. However, this scan actually gives Jankom some new information, since he hadn’t been aware that the Tellarites were one of the founding species of the Federation.

Two other members of the Protostar crew are also without scanning surprises. We already knew that Zero (Angus Imrie) was a Medusian. And while the scanner fails to recognize the species from which Gwyn (Ella Purnell) hails, that makes sense, since we already know that Starfleet will only make First Contact with them at a future date.

Could Dal Be Neelix: The Next Generation?

However, perhaps the juiciest piece of information from the sequence is the reaction that the scanner has to Dal. Before he is scanned, Frex attempts to guess what species he might be. One of the possibilities he suggests is “Talaxian,” the same species as Neelix (Ethan Phillips) on Star Trek: Voyager. The Talaxians were introduced on Voyager, the same show from which Prodigy’s main character Kathryn Janeway (Kate Mulgrew) originated.

But when Dal steps into the scanner, it does register a hit. However, rather than dispense any specific information about what that hit may be, the scanner only displays an urgent message insisting that Starfleet Command be contacted.

What has been detected by the CR-721 scanners? Before Dal or the audience could find out, the weapon aboard the Protostar destroyed the space station and sent the crew fleeing from Starfleet. Still, this is a tantalizing hint of what’s to come with Dal in the back half of Star Trek: Prodigy Season 1!