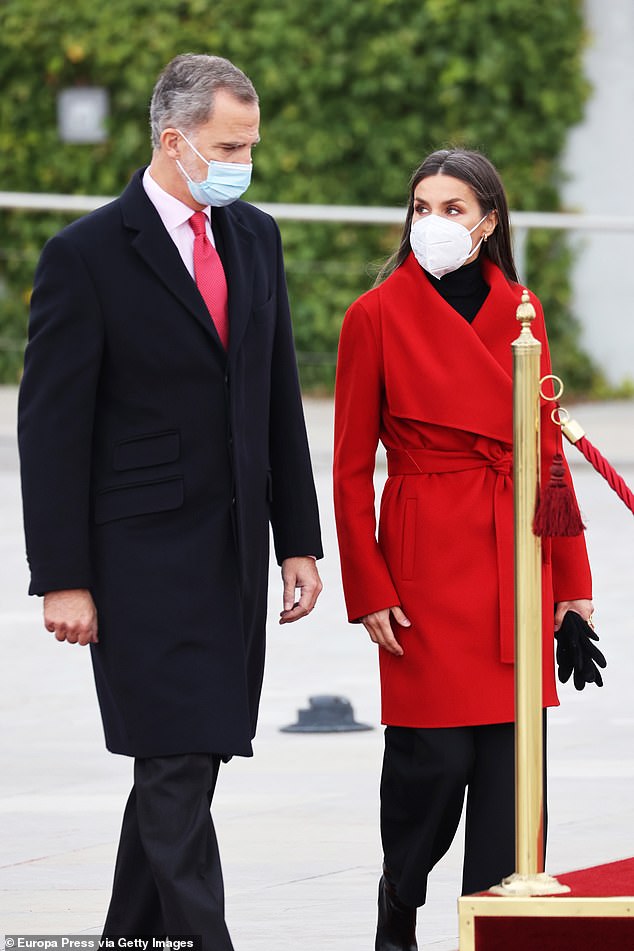 Queen Letizia combined festive spirit with her impeccable fashion sense as she departed for a two-day trip to Sweden this morning.

The Spanish royal, 49, wrapped up in a crimson Hugo Boss coat and black culottes as she boarded a flight to Sweden with King Felipe VI, 53, at Adolfo Suarez Madrid-Barajas International airport.

The parents-of-two have been invited to spend two days in Sweden with the royal family and will enjoy a schedule packed with engagements during their second official trip outside of Spain since the beginning of the Coronavirus pandemic.

Fashion-forward Letizia did not sacrifice style for comfort ahead of her three-hour flight and picked the stunning coat, which she first wore in 2017 at meeting with Spanish Association Against Cancer (AECC).

Queen Letizia of Spain, 49, recycled a stunning crimson coat by Hugo Boss she first wore in 2017 as she departed from Adolfo Suarez Madrid-Barajas International airport ahead of a two-day trip to Sweden this morning She let the coat do the talking by keeping the rest of her outfit black, with a simple  turtleneck and black culottes, which she paired with leather black boots with a sensible heel.

The mother-of-two was also seen with a pair of black leather gloves, perfect for the frosty weather awaiting her in Sweden.

Her brown locks looked particularly sleek, styled straight and tucked into her coat’s collar with just a streak of natural grey hair peeking through. 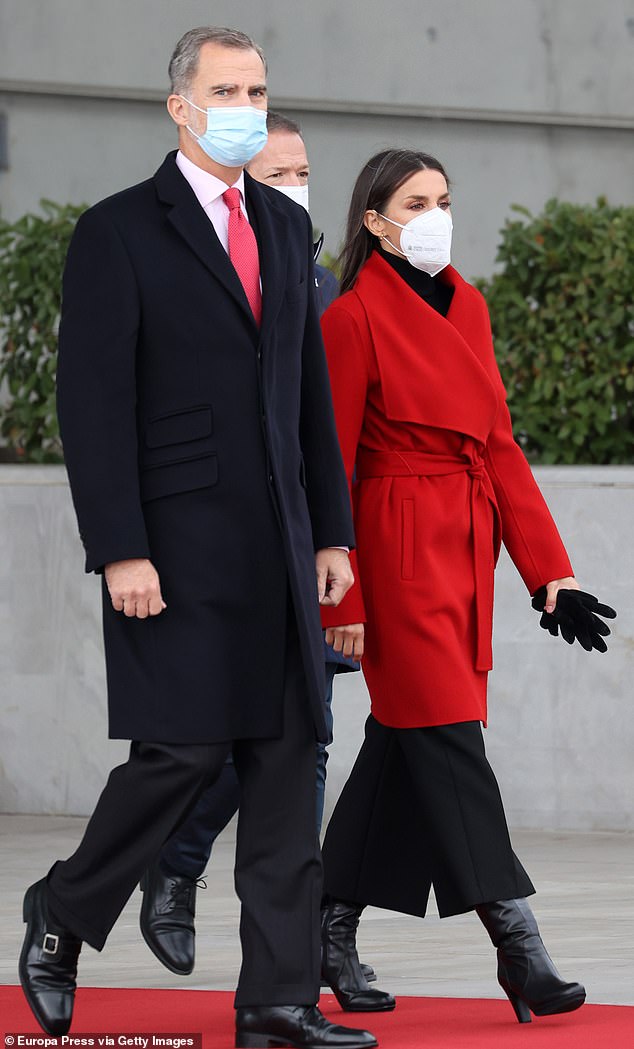 The Spanish Queen paired the colourful coat with a black turtleneck and equally black culottes, pictured 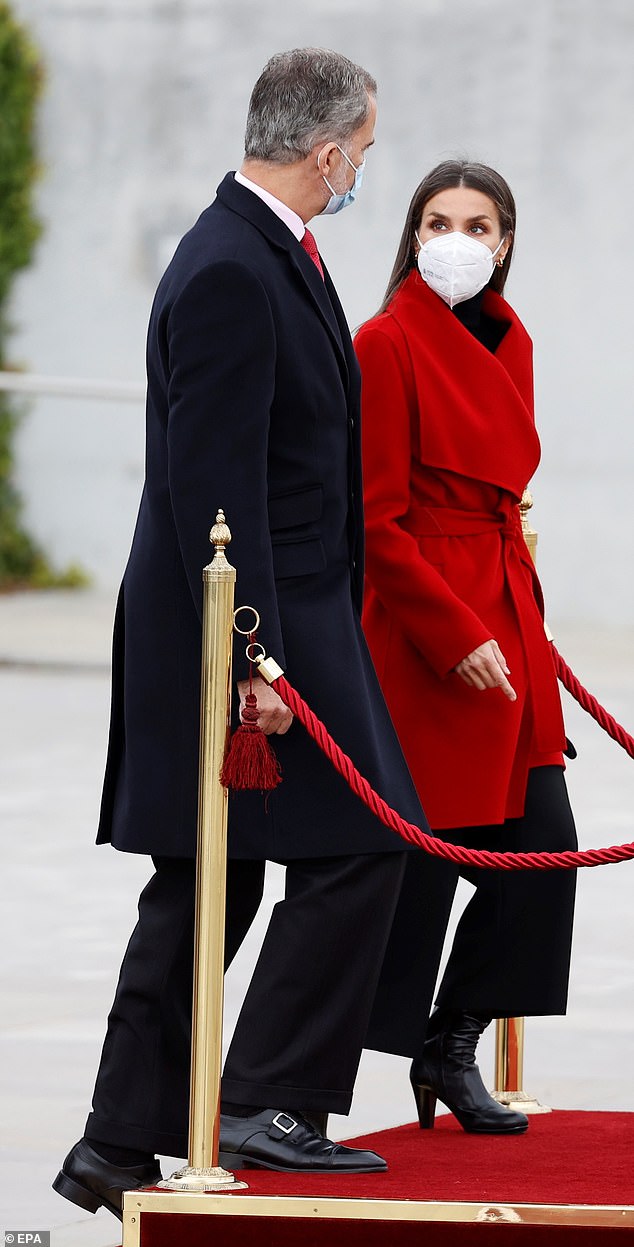 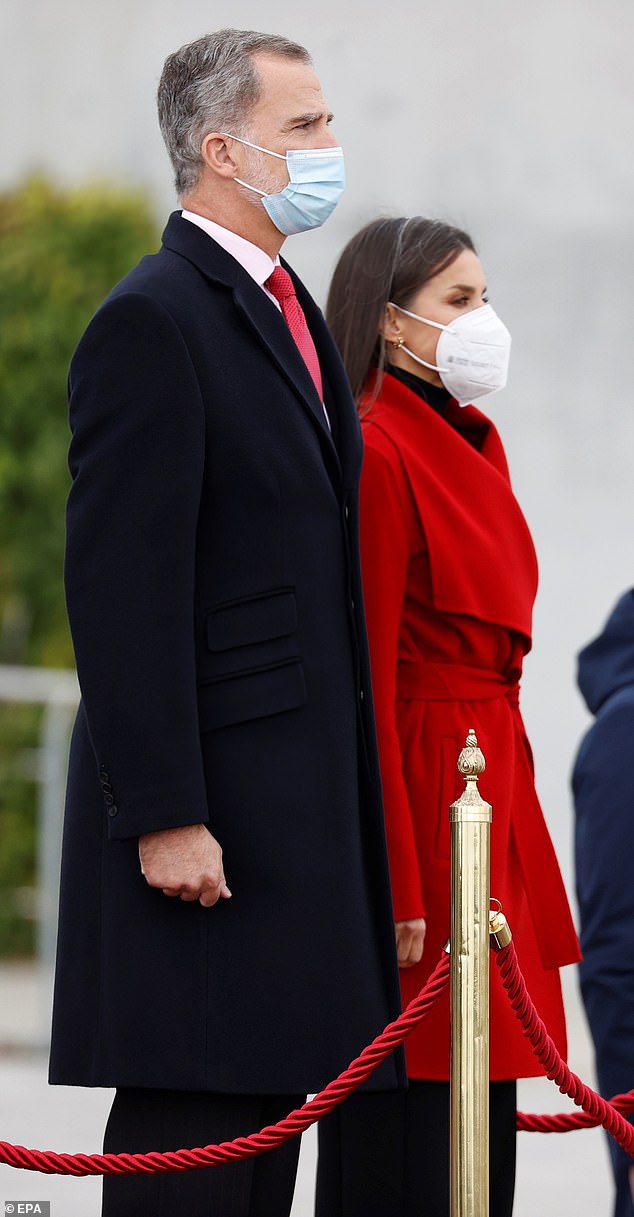 Even on the go, the Spanish royal donned a glamourous make-up, with her signature bronze eye-shadow and a dash of mascara, with a dash of bronzer highlighting her healthy complexion.

Known to rock minimalist jewellery, she accessorised with a pair of medium-sized gold hoop earrings.

Walking alongside his wife, King Felipe VI looked smart in a navy overcoat he wore over a black suit, pale pink shirt and a pink tie.

The Spanish couple have a busy schedule ahead of them in Sweden this week. 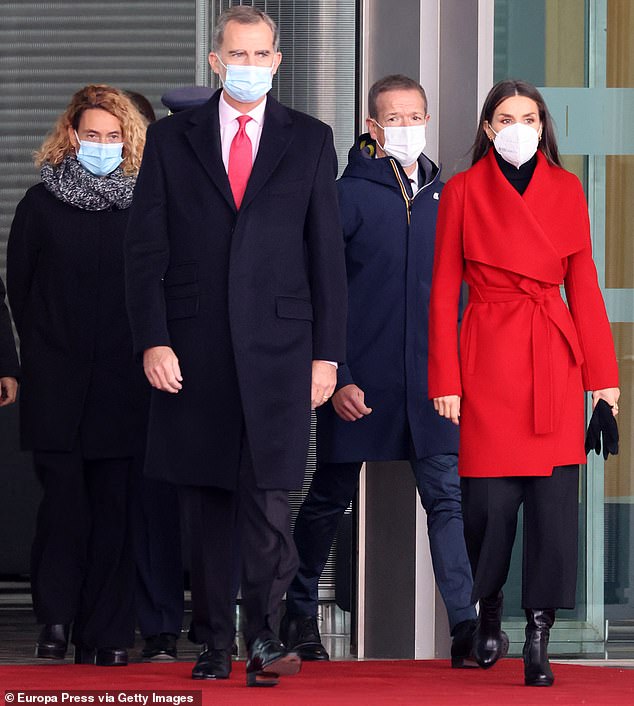 The President of Spanish Congress, Meritxell Bate, left, accompanied the couple to the airport today

Spanish media Lecturas reported the king and queen will be received by a welcome committee in Stockholm, before enjoying a carriage ride through the streets of Stockholm, a visit to the Nobel Museum, regular meetings between the monarchs as well as a gala banquet.

The feast will be attended by King Carl Gustav and Queen Silvia of Sweden, as well as Crown Princess Victoria and her husband Prince Daniel, and Prince Carl Philip and Princess Sofia, who welcomed a son this summer.

The visit aims to promote good relationships between Spanish and Sweden as well as support in recovering from the Covid-19 pandemic. 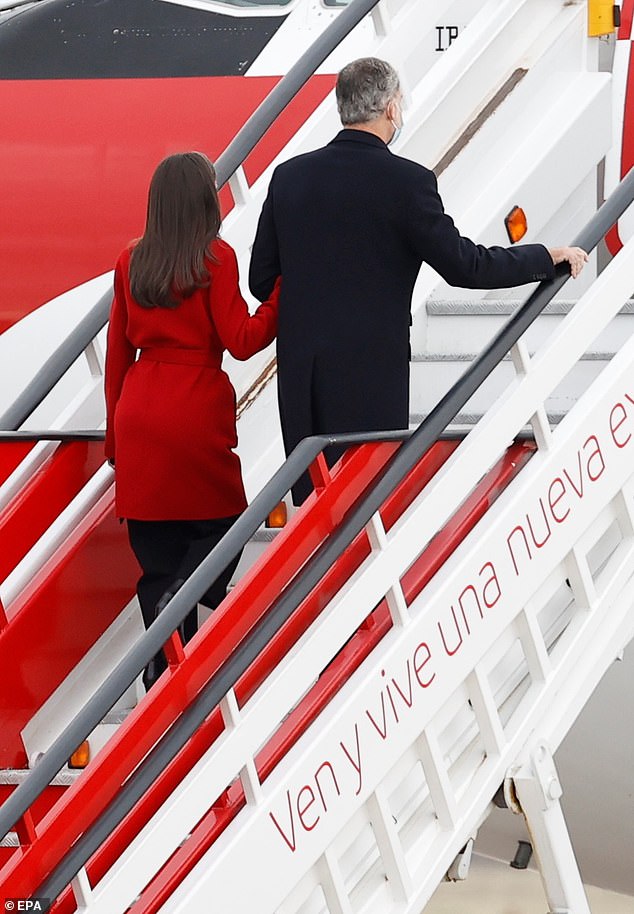 The parents-of-two linked arms as they boarded their plane. It is the second time they are leaving Spain since the beginning of the coronavirus pandemic 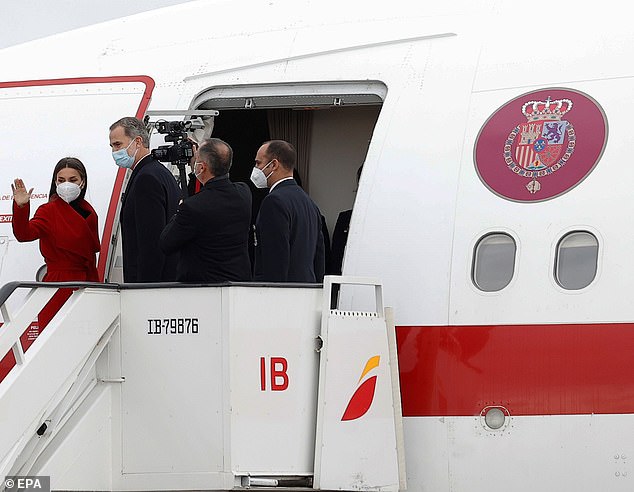 Safe travels! The couple waved goodbye before entering the plane. They will spend two days in Sweden to strengthen Spain’s relation with the Scandinavian country 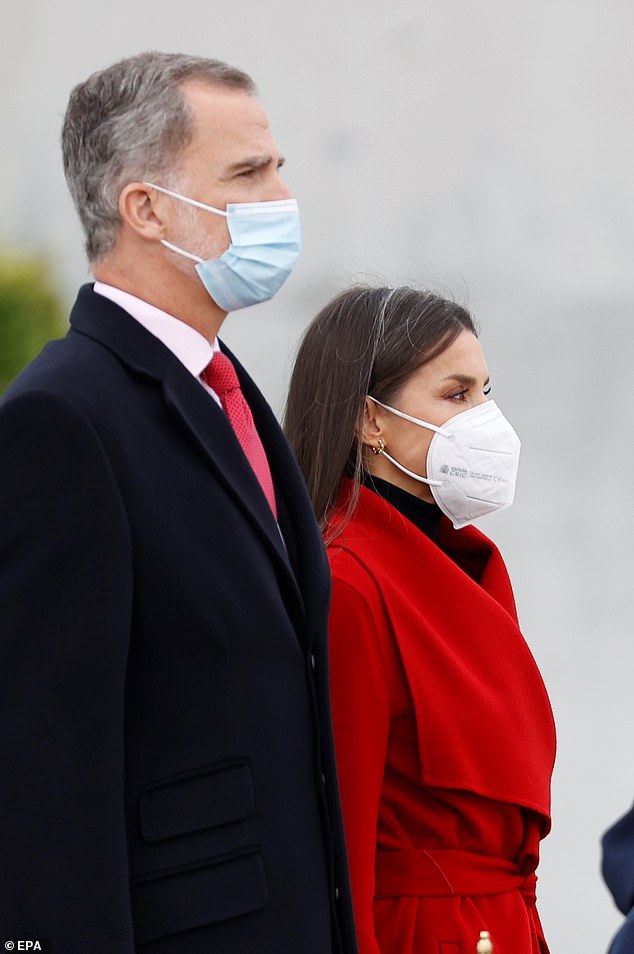 Felipe VI looked smart in a navy overcoat with a pale pink shirt and a pink tie this morning in Madrid,

During the visit, Felipe VI will grant the Grand Cross of the Royal and Distinguished Spanish Order of Carlos III to Queen Silvia to show his ‘royal appreciation.’

The light blue silk band is the second most important order in Spain, below the Golden Fleece, which was granted to Princess Leonor, Felipe VI and Letizia’s oldest daughter, 15.

Felipe VI also announced that Crown Princess Victoria will receive the Grand Cross of the Order of Isabel la Católica, which was previously her mother’s.

Prince Daniel, Prince Carlos Felipe and Princess Sofia have also been recognized by the Kings. They will receive the Grand Cross of the Order of Civil Merit.

King Carl Gustav will not receive an order of his own because he was already decorated with the Order of the Golden Fleece in 1984.

This is the second time since the beginning of the coronavirus pandemic that the Spanish royal couple are travelling outside of Spain.

Earlier this month, they jetted off to Paraguay for an official diplomatic trip, where they met with the country’s President and First Lady to discuss a co-operation program between the two countries.