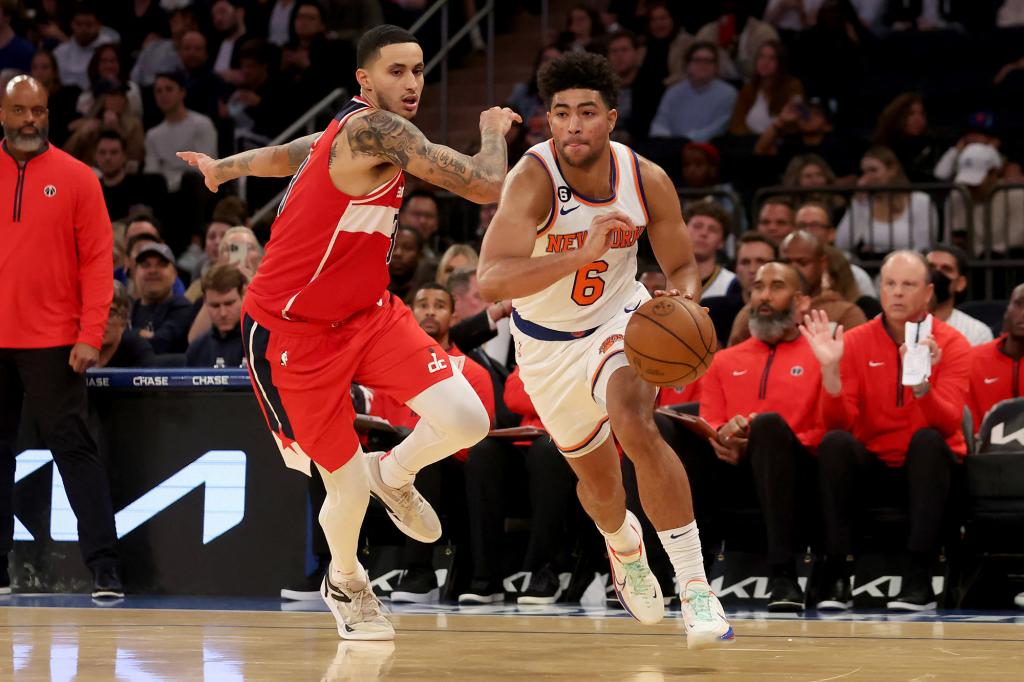 Quentin Grimes and Obi Toppin were both limited participants in Knicks practice Monday, with coach Tom Thibodeau sounding less optimistic about Grimes in particular than he did one day prior.

“When he’s ready, he’s ready,” Thibodeau said of Grimes’ chances of playing in Wednesday night’s season opener against the Grizzlies. “We just get the daily report. If he’s not ready, next guy, get in there.”

On Sunday, Thibodeau had said he expects both to be fine, with Toppin being a merely precautionary case. Grimes played 16 minutes in the preseason finale on Friday against the Wizards and was a full practice participant in the lead up. Thibodeau said there has been no setback with a sore left foot for Grimes, with the team just following the recommendation of its training staff.

“The idea behind it is to get it to the point where it doesn’t reoccur,” Thibodeau said. “So if we have to be a little more patient now, that’s what we gotta do. It’s a long season so get completely healthy and then when that happens, then we move forward. There’s no rush. He has to get back to a certain level health-wise then he’s gotta get up to speed with what we’re doing.”

Neither Grimes nor Toppin have been ruled out against Memphis. Toppin has not gotten imaging on his ankle after tweaking it by tripping over a fan, a team spokesman said.

“Same thing. It’s preseason, we want to make sure that he’s completely ready,” Thibodeau said, regarding Toppin. “Same thing at that position. That’s why you have a complete roster. You’re gonna have injuries.”

If one or both of them isn’t ready to go on Wednesday, it could open up an opportunity for Cam Reddish, among others. Reddish, who was open to a change of scenery over the summer due to his lack of a clear role, is still facing the same question marks over where he fits into a rotation in which he is behind Grimes, Toppin, RJ Barrett and Julius Randle at the forward spots.

“We’ve been trying to work on some guys playing multiple positions,” Thibodeau said when asked about the 4 spot specifically. “We also have the ability to go small. RJ did that some for us last year, we’re comfortable with that. Cam’s capable of doing it as well, so we have that flexibility. Isaiah [Hartenstein’s] done it some for us.”

Derrick Rose said he feels “lighter” after a minor procedure on his ankle toward the end of last season dealt with a bone spur.

“The spur that I have, I’ve been dealing with it for a while, so to be moving around without having to get treatment after or worrying about it, it takes the load off me,” Rose said.