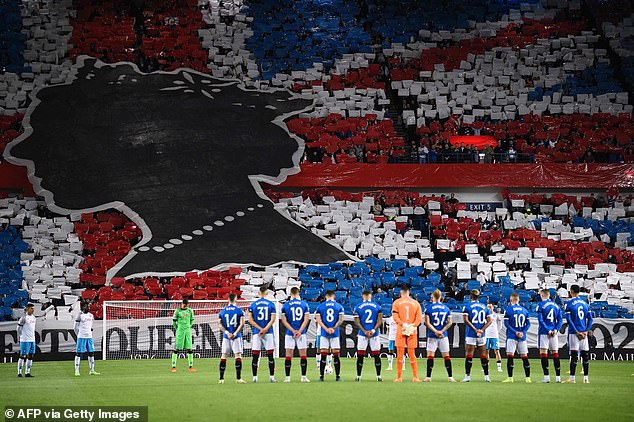 Rangers defied UEFA’s ban on British teams playing the national anthem before Champions League matches tonight as the Scottish side played ‘God Save the King’ through speakers at Ibrox.

There was a growing sense throughout the day that Rangers and Chelsea, who saw supporters encouraged by a fan group to ‘belt out’ the anthem before their match with Red Bull Salzburg, would both disregard the anthem ruling from UEFA.

With no visiting Napoli fans in tow, due to policing shortages, the Rangers-only crowd first observed a minute’s silence impeccably before the national anthem was then played out over the PA system.

At Chelsea there were plenty of tributes to the Queen and there was an impromptu version of the British national anthem sung by supporters before kick-off, despite guidance not to do so.

Sportsmail exclusively revealed this week that UEFA turned down requests from British clubs to play the national anthem before European matches on Wednesday night following the Queen’s death.

Manchester City, Chelsea and Rangers all made pleas to be given licence to play God Save the King ahead of their home fixtures.

UEFA refused ‘on the basis of maintaining a consistent pre-match ceremony with a subdued atmosphere and without any celebratory activities across all UK venues to show respect’. 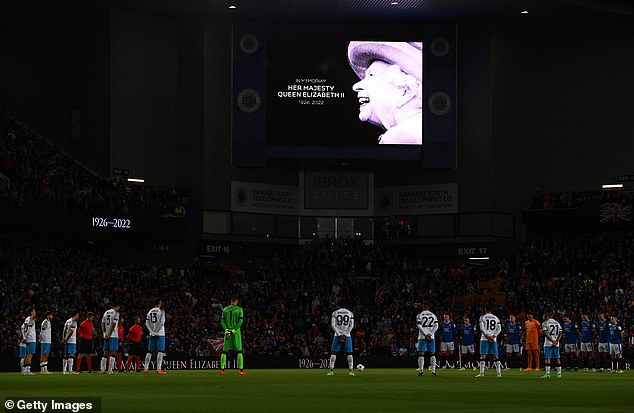 UEFA denied British clubs’ request to play the national anthem before Champions League matches on Wednesday. Rangers elected to ignore that ruling and play it regardless 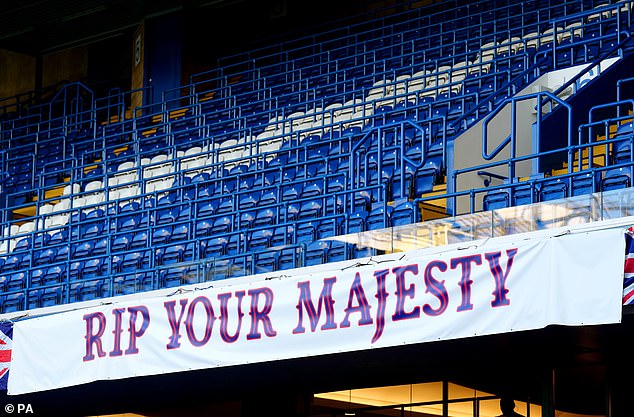 European football’s governing body elected not to play the Champions League anthem before kick-off and black armbands were worn by teams and staff where requested but the anthem was not permitted.

But Rangers chose to completely disregard the UEFA ruling and the PA announcer confirmed before the silence that the British national anthem would follow.

Manchester City made a plea to UEFA but, having been denied that right, they followed protocol and did not play the anthem out, as Rangers did.

Chelsea did not play it through the stadium speakers but fans rallied for a rendition of the anthem prior to the silence.

In Manchester, both City and opponents Borussia Dortmund did, however, observe a minute’s silence in memory of the Queen. 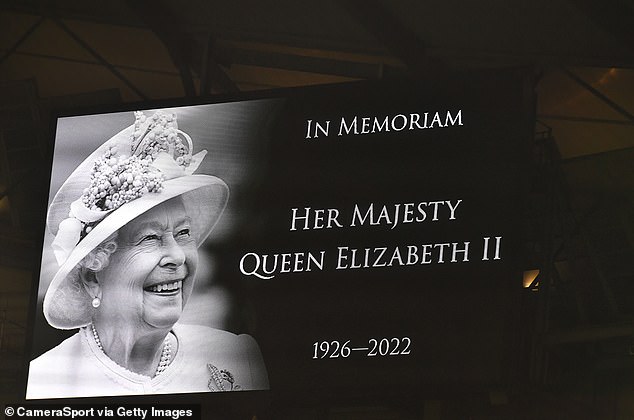 Thousands of Rangers fans arrived armed with flags in tribute to the Queen, while Union Jack flags adorned the outskirts of the stadium ahead of Rangers’ Champions League homecoming.

Chelsea fans produced their own banner tribute at their Shed End with a message reading: ‘RIP YOUR MAJESTY’ before committing to a version of the national anthem as players emerged from the tunnel.

On Wednesday morning a Chelsea fan group urged supporters to ‘belt out’ the anthem that evening in defiance to UEFA’s ban.

An image to Twitter showed some supporters setting up at Stamford Bridge with Union Jack flags ahead of the game.

The picture showed one end of the ground decked out in Union Jack flags, and in the accompanying post it encouraged fans coming to the game to do the same.

Stating ‘Setting up for tomorrow. Bring your Union Jack flags tomorrow if you have them. RIP Your Majesty’. 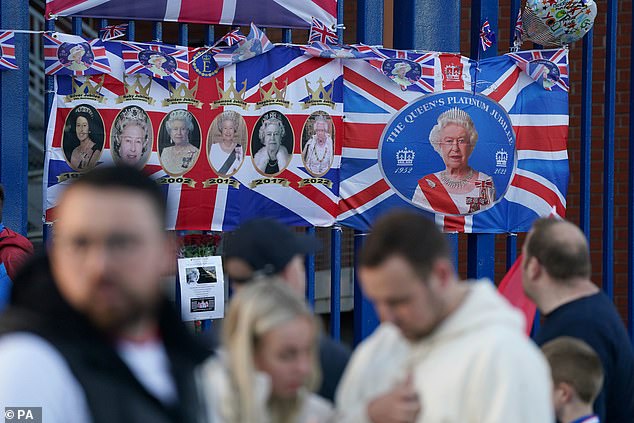 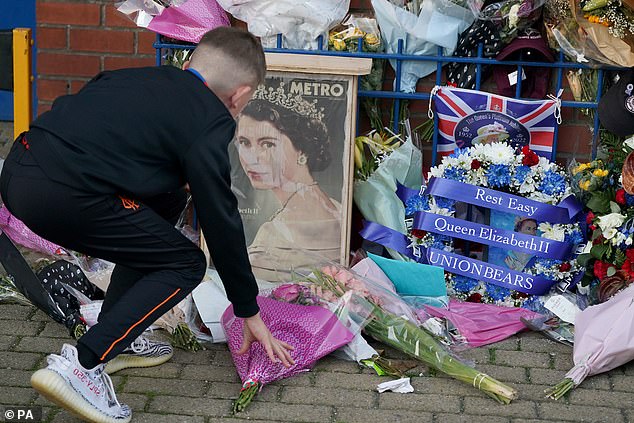 Red Bull Salzburg’s fans paid their own tribute by walking to Stamford Bridge in silence.

In a video shared from the Austrian club’s Twitter page, fans can be seen solemnly walking to the stadium in silence.

‘Out of respect for the Queen, our fans walked in silence from Earl’s Court to the stadium,’ a tweet read.

‘We remain united with the people of the UK in this time of grief.’

Out of respect for the Queen, our fans walked in silence from Earl’s Court to the stadium.

We remain united with the people of the UK in this time of grief. pic.twitter.com/Nc1nmKHxJS

By contrast, Celtic fans unveiled an offensive banner that read ‘f*** the crown’ during their Champions League clash with Shakhtar Donetsk on Wednesday.

BT Sport were forced to apologise after honing in on an offensive banner concerning the Queen’s death on Wednesday.

Following a pre-match meeting between Celtic, Shakhtar and UEFA, however, it was decided that there would be no minute’s silence before kick off. 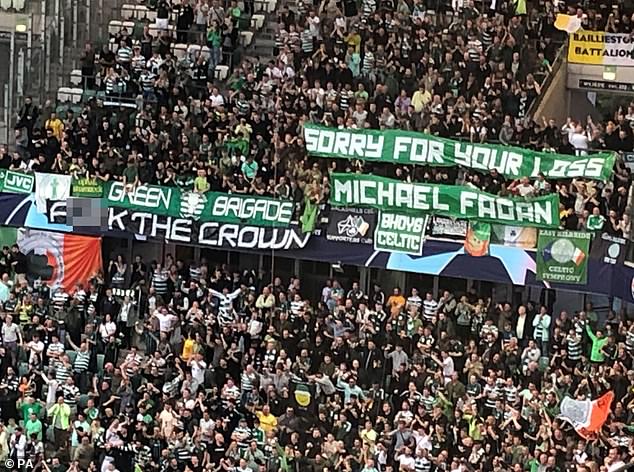 Players from both teams did wear black armbands in Her Majesty’s memory.

God Save The King was first sung before Saturday’s third test between England South Africa at the Oval and is set to used at Premier League games this weekend as part of the tributes being paid to the passing of The Queen.

Last week, just hour after the Queen’s death was announced, there were similarly moving scenes at other matches.

Thousands of West Ham fans broke into an emotional rendition of ‘God Save the Queen’. 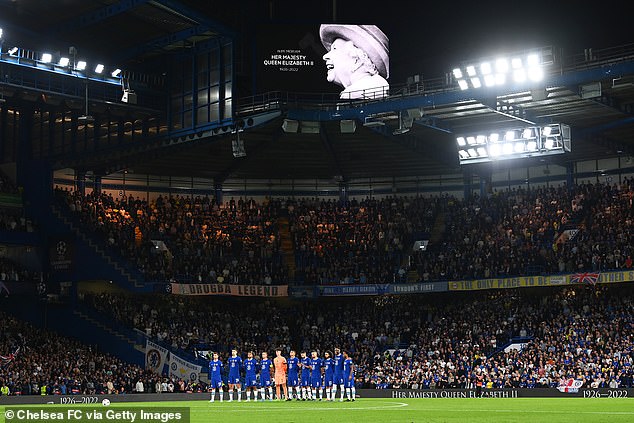