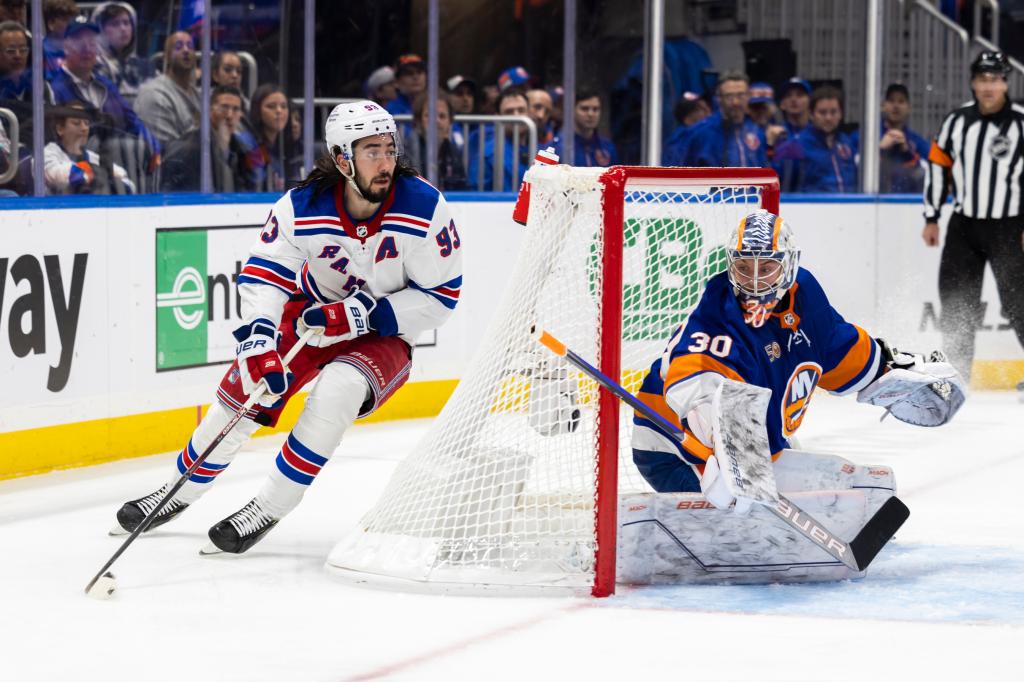 After four straight defeats (0-2-2) in which the Rangers have scored a sum of five goals and only one on the power play (at five-on-three, no less), the first instinct might be to change things up for the sake of changing things up.

To do something for goodness sakes — to do anything! — to stop the club’s longest losing streak since Gerard Gallant went behind the bench at the start of last season.

But that is not how the 3-3-2 Rangers are processing things at the moment. To the contrary, according to Very Important People Mika Zibanejad and Artemi Panarin, who advise that this is not time to panic, not time to overthink it, but instead an occasion to stay the course.

“We can do things a little better, don’t get me wrong, but I feel we are doing the right thing a large part of the time and are just not getting the end result we want,” Zibanejad told The Post following the Blueshirts’ 3-0 defeat to the Islanders at UBS. “I think we have to be careful to understand that just because pucks are not going in that we shouldn’t abandon what we’re doing and look for a different play, or the next play.

“To me the scary thing is overreacting and not sticking to the process. You have to balance things. Of course it is not OK to lose and we’re not OK with it, but the focus needs to be on doing the right things and not the outcome. It’s not like last year when we would get 19 shots or something.”

The Rangers sent 41 shots on Ilya Sorokin after pumping 44 at Colorado’s Alex Georgiev a night earlier at the Garden. The Blueshirts scored two goals for their troubles. They scored none on the power play, 0-for-3 in this one after going 0-for-4 in Tuesday’s shootout defeat. They are 1-for-15 over their last four games.

The man-advantage unit comprises so much of the team’s identity. They load up on the first unit in personnel and ice-time. Everyone knows it. So the question The Post posed to Panarin was whether frustration from power-play malfunction seeps into the club’s five-on-five play.

“I thought we played really well in the last two games. The Sharks and CBJ, we were terrible but I can’t say I see frustration on the power play that carries into our five-on-five,” Panarin said. “I don’t feel that way. If the [power play] doesn’t score, I still work hard at five-on-five. And that’s not just me.

“Pucks are not going in but if we stick to it and are confident in ourselves and each other, 100 percent the hockey gods will reward us.”

The Rangers did have chances against Sorokin. Julien Gauthier, recalled from the Wolf Pack to take the place of an ailing Vitali Kravtsov, did his thing by taking it to the net off a right-wing power move in the first that, being that we are speaking of Gauthier, did not go in. Where are the hockey gods when No. 12 needs them?

Kaapo Kakko weaved through the opposition and seemed to have Sorokin beaten, but the netminder got his pad out to deny the Finn in a scoreless first period in which the Blueshirts had the better of the play. But even with 41 shots, the Rangers were unable to generate enough second and third chances. They were unable to generate a consistent ground game.

Of course, with Filip Chytil down with a suspected concussion, the club’s scoring depth has taken a major hit. The fourth line is struggling to gain any type of traction. Hence, Gallant is piling minutes on his top guys. Tuesday, Zibanejad got 25:43 of ice time, the fifth highest of his career. Panarin was out for 24:33 against the Avalanche.

Things looked easy for the Rangers’ power play in going 5-for-15 the first four games. They were not. Easy is not in the hockey vocabulary.

“The things that look easy, so much work goes into that,” said Zibanejad, who had four shots on five attempts in 20:20 of ice. “Again, when we do the right things and the puck doesn’t go in, we need to stick with our plan. We shouldn’t be stubborn, but we have to be able to recognize what we’re doing well.

“The same conversation occurs every year under these circumstances. The most important thing is for us not to second-guess ourselves and not to lose trust in ourselves and our teammates.

“If we keep doing the right thing, results will follow.”