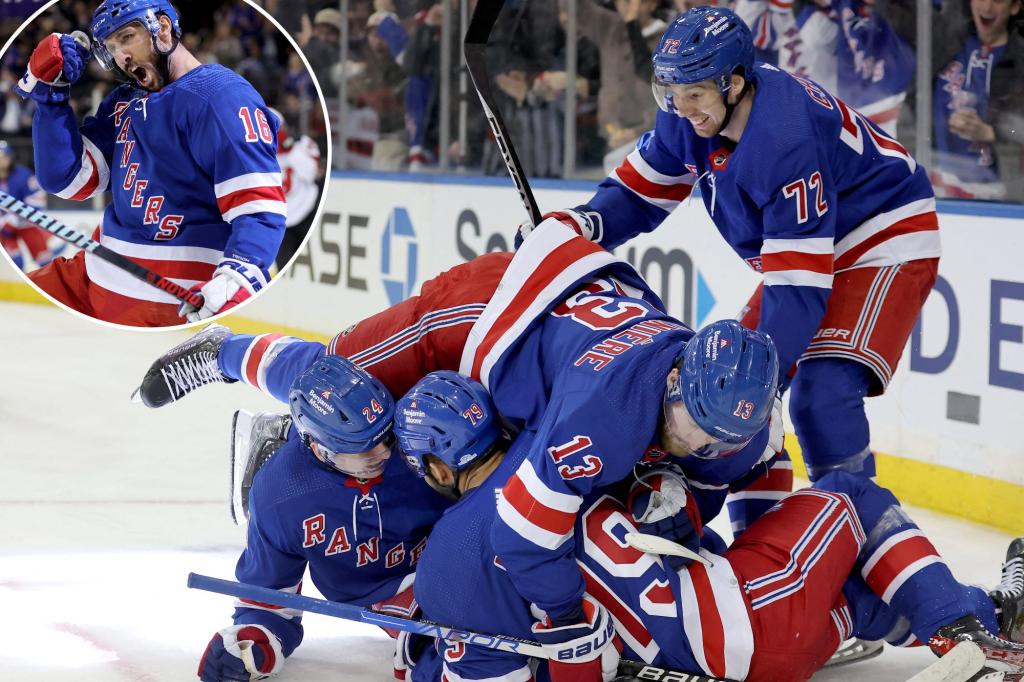 That was all it took Monday night for the resilient Rangers to barge their way back into a game that seemed to be long gone early in the first period. Two quick goals in the second period allowed the Rangers to force overtime, where Filip Chytil scored 2:15 into the extra period to extend his team’s win streak to four games with a 4-3 victory.

The Devils haven’t lost two games in a row since their first two contests of the season, but the Rangers made it happen.

In the middle frame, Jack Hughes roofed a filthy backhander on Igor Shesterkin to give the Devils a 3-1 lead and it was the kind of goal to which teams often can’t respond. The Rangers, however, had a rather swift reply.

With Devils defenseman Jonas Siegenthaler in the box for interference, Vincent Trocheck tipped in an Adam Fox wrister to cut the Devils’ lead to one. The celebratory goal song had barely ended at the Garden before a stellar passing sequence from the youngsters ended with a game-tying goal from Kaapo Kakko.

The two goals in seven seconds tied for the seventh-fastest pair of goals in franchise history.

It didn’t take long for Gerard Gallant to rip up the lineup card. The Rangers head coach switched his top two centers, Mika Zibanejad and Filip Chytil, which reunited the Kid Line once again. The forward lines weren’t the only changes made, either. Gallant bumped Jacob Trouba to the bottom duo with Libor Hajek, while K’Andre Miller and Braden Schneider paired up.

The Rangers didn’t record their first shot on goal until Hajek sent one on net more than halfway through the first period. At that point, the Devils had already hung two on Shesterkin on just six shots. The visitors didn’t give the Rangers any room to breathe, making them skate uncomfortably while Devils contested every puck.

Off a faceoff win from a weird angle at the top of the zone, Siegenthaler flung the puck on net and Shesterkin reacted too late as the Rangers fell behind 1-0.

Trouba had a particularly rough first few shifts. Shesterkin bailed him out after a poor clearing attempt early on, but the Devils made the Rangers’ captain pay for the next one. Trouba fumbled the puck in front and couldn’t get it out of the zone before Dawson Mercer buried it off a feed from Hughes to double the Devils’ lead.

By the end of the opening 20 minutes, the Rangers pushed back a bit and cut the Devils’ lead in half in the process. Trocheck fed Chris Kreider on a two-on-one rush to put the Rangers on the board. The Rangers were able carry some momentum from the goal into the second period, but Hughes net what could’ve been a backbreaker at 11:05 of the middle frame.

With Miller pinching, Hughes broke out on the rush and kept the puck for himself before going top shelf off a backhander. Hughes could’ve scored again after Schneider tripped him from behind on a breakaway, which gifted the Devils’ first-overall pick from 2019 a penalty shot, but Shesterkin denied him a with poke check.