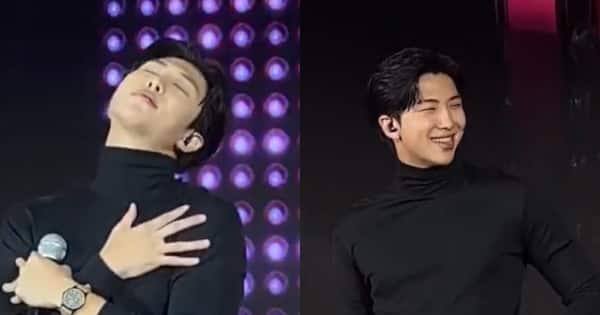 It’s a very weird day for the BTS ARMY. They got to know about the inside scoop of BTS’ military enlistment from Kim Seokjin aka Jin’s live for The Astronaut. And on the other hand, Kim Namjoon aka RM and Jung Hoseok aka J-Hope attended an event together in Seoul. And from the event, a video of RM grooving to his song with Balming Tiger, Sexy Nukim, is going viral. ARMY is in a tizzy over Namjoon’s moves on stage. He performed it in front of a lot of ARMYs it seems. And Twitter ARMY is going crazy!

Kim Namjoon aka RM and Jung Hoseok aka J-Hope attended the event Love Your W for the breast cancer awareness campaign. Both RM and J-Hope were dressed smartly in black. ARMY went gaga over their looks as it is. And to add to their woes was RM grooving to his recent single Sexy Nukim in collaboration with Balming Tiger. Namjoon had taken his coat off and was seen in a black polo-neck tee. ARMY loves it when RM is in full sleeved polo-neck outfit. RM’s expressions and body language have left ARMY swooning. He basically set a thirst trap. RM’s video is going to be a big thing in Hollywood News.

ARMY is in a fix whether to cry or drool

So, when RM’s video of Sexy Nukim went viral, around at the same time, Kim Seokjin aka Jin had come live and talked about his latest single release The Astronaut. During his live, he also talked about BTS Military Enlistment. ARMYs were crying as it is and then RM’s video went viral which left them confused about whether to cry or to swoon. Check out the tweets here:

WTH JOON I AM STILL EMOTIONAL BECAUSE OF THE ASTRONAUT ? LET ME LIVE ? pic.twitter.com/5ODa4pcufw

KIM NAMJOON WE WERE JUST CRYING WE WERE SUPPOSED TO CRY WHYYY not he using the thirst traps unknowingly i love him?

Sir i was suppose to be crying over Jin’s live and the astronaut but here i am… namjoon can you please calm down #RM pic.twitter.com/Fuw5MFuka8

I think so. They literally sad: STOP CRYING

the emotions ride today is very interesting…. SOMEONE STOP THIS DUDE HIM PUTTING HIS HANDS ON HIS BOOBS ND THAT DAMN SMILE WTF KIM NAMJOON pic.twitter.com/vOLxuH87nX

Moment ago, I was crying cuz seokjin’s live but emotions are changing
WTF KIM NAMJOON ?

RM and J-Hope talked about their recent concert. The BTS leader said that all 7 of them had loads of fun at the concert. J-Hope added that the concert was done for a good cause and hence, it was very meaningful for them all.