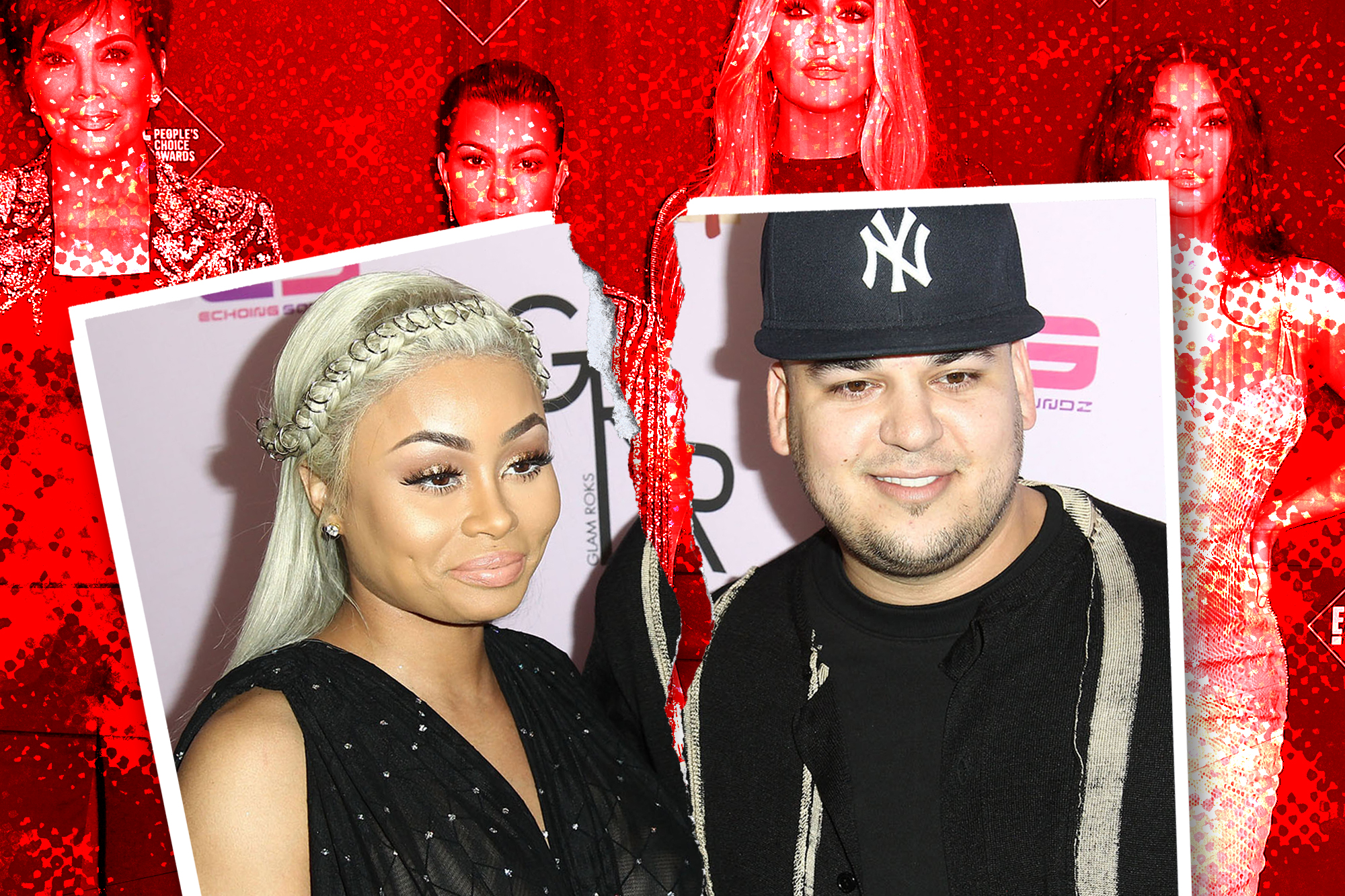 Trying to keep up with this whirlwind romance would likely turn heads and break necks.

From a canceled reality show to a recent courtroom showdown, the relationship between Blac Chyna and Rob Kardashian has been defined by high stakes and low blows even before the were engaged in March 2016.

So, where did the love go wrong for these two? We’re looking at their birth charts and zodiac signs to see if the stars behind these stars alway spelled catastrophe.

Rob Kardashian was born March 17, 1987 making him a Pisces sun with a Libra moon. A year later, on May 11, 1988 we were given. the gift of Angela Renée White, better known to the world and defense attorneys as Blac Chyna, a stalwart Taurus sun with an escapist Pisces moon.

Taurus rules the second house of values and possessions with a concentration on the tactile, the beautiful  and the useful. The baseline energy of Taurus is evaluative, it accesses information, opportunities and people based on how/why/how much those things can benefit them. It’s not so much manipulation as strategy, folks, and Chyna has proven herself a master of the game. She parlayed her popularity as a model and exotic dancer into music video stardom, reality television fame and a burgeoning cosmetics empire. Taurus is ruled by Venus, planet of beauty and aesthetics so it tracks that Chyna would invest in ventures that champion both.

Hard working and materially motivated, Taureans like Chyna believe they deserve the best and will grind, on a pole if need be, to secure their comfort. While Taurus works hard, they are a fixed sign that also holds on tight. Do not, I repeat do not, get in the way of a Taurus and their possessions or their earning potential as bulls will go to war, social media and court, to protect what they see as theirs. Cue Chyna’s lawsuit against the Kardashians foro lost income and the public claim that she had to give up three luxury vehicles because Kardashian, father to her daughter Dream and Tyga, they ex with whom she shares son King, both failed to provide her with child support.

Chyna’s sun in Taurus squares her Mars in Aquarius, creating a tension that encourages her fighting, and at point litigious spirit. Mars is the planet of action and aggression and when it squares the sun it suggests a need for conflict, competition and ultimate victory. This square requires constant action, a need that can take the form of sex, self-expression, Tae Bo, risky stock investments or a business empire. Trouble arises when the prodigious energies of this square are not channeled towards productive means, resulting instead in petty quarrels, long standing feuds and self-destructive tendencies. Chyna certainly knows how to pick a fight with formidable foes as the Kardashian clan is awash in ‘we came to win’ Scorpio energy.

Moon square Mars folks are often survivors of difficult childhoods in which they felt threatened physically or psychologically and adapted a warrior mentality in order to survive. The challenge for these individuals is to find something to fight for, rather than rage against. The upswing of this square is that it encourages those with this placement to turn adversity into triumph, setbacks into success.

Rob’s sun is in Pisces, a sign associated with dreams, creativity, avoidance and addiction. In terms of the physical body, Pisces rules the feet andfittingly, Rob’s premiere enterprise has been his luxury sock line, Arthur George. Pisces also rules the twelfth house of the unconscious mind, isolation and hidden enemies. Natives like the famously reclusive Rob often struggle to find their footing in the real world, preferring the soft glow of fantasy or an escape into substances, food or the alternate reality provided by video games.

While Chyna’s sun is square Mars, Rob’s sun is square, Uranus, plate of rabblerousing and rebellion. This aspect suggests that Rob needs to stand apart from the crowd by any means necessary, even and perhaps especially if that apartness is seen as weird and unwarranted. The abrupt, divisive nature of Uranus makes relationships difficult as their sense of humor can come across as either oddball or offensive and they seem to provoke or push others to react out of an inborn need for something to happen. The combination of these squares, Rob’s need for disruption coupled with Chyna’s preference for conflict, is an absolute recipe for ruin.

While Rob has a conflict avoidant, hard truth averse Pisces sun, Chyna has a Pisces moon. One would think this would equate to finding common ground but when water signs are concerned, the commonality can manifest as inordinate sensitivity and the desire to escape together or from each other through the avenues of substance. Indeed, both Kardashian and Chyna have a difficult history with alcohol and both admitted that their first date was baptized by “lots and  lots of Hennessy.”

In astrology the moon represents our emotional interiority and indicates what kind of past life experiences we carry into this incarnation. A Pisces moon manifests as one of two previous life paths; an isolated spiritual practitioner or someone who lived in perpetual victimhood. In both instances the Pisces moon finds it hard to function on the earthly plane this go round. They struggle to create clear boundaries, operate independently and identify who and what is detrimental to them, cue toxic partners, friends and business associates and a pattern of questionable life choices.

Escapism is the preferred method of defense for a Pisces moon and many turn to drugs and alcohol as a way to cope with the sharp edges of reality. We see this tendency towards escape expressed in Chyna who was arrested in 2016 on charges of public intoxication and drug possession. Rob Kardashian maintains that Chyna was under the influence of alcohol and cocaine when she allegedly pulled a gun on him and assaulted him with a metal rod in their shared home. The positive side of this troubled lunar placement is that it holds the potential for radical, collective healing. If a Pisces moon can survive themselves, they are inclined to help others find a way out of the dark.

Astrology 101: Your guide to the stars

By contrast, Rob’s moon is in the cardinal sign of Libra. Libras have a reputation for being peacekeeping people pleasers but make no mistake, one of the hallmarks of the sign of scales and balances is keeping score. In terms of past life experiences lunar Libras have lived solely in the realm of relationships and almost exclusively in a supportive role that prevented them from fully developing themselves as individuals. Folks like Rob come into this life with the hangover of the previous one, believing mistakenly that they aren’t whole unless they are committed to another person. This sets them up for failure and codependency, uneven partner dynamics and the habit of staying in the wrong relationships too long. With this couple, holding on when they should be letting go is reflected and further  reinforced by Chyna’s fixed, committed to misery so long as it’s a commitment, Taurus sun.

Mercury is the planet of communication and it indicates how we learn and express ourselves. Our girl Chyna has Mercury in the mutable at best, maniacal at worst sign of Gemini. Mercury is the planetary ruler of Gemini so it flexes here, it’s quick witted and quick to identify the communicative weaknesses in others. It’s provocative and playful. It tracks that Chyna would call her gun pointing, charger choke out of Rob a “joke.” Whether hurled in humor or in hate, no one levels an insult as swiftly or memorably as a Mercury in Gemini native. This is a moody Mercury that runs hot with sweet nothings and dead cold with detached silence. Words and the absence of them are expertly wielded and sometimes weaponized by these folks because they are nimble with language and loose with commitment their relationship to the truth is curious.

By contrast, Rob has Mercury in mutable, elusive Pisces suggesting his style of communication is based more on feelings and intuition than intellect. If it sounds as slippery as the fish that represents it, it is. Because Pisces is an acutely sensitive sign, the planet of communication goes full emo in its expression here. It’s messy, it’s recording badly lit confessionals and oscillating between g self flagellation and shameless victimhood. We see this modality alive and unwell in Kardashian’s social media chronicling of his relationship troubles. Earnest? Perhaps. Tactful, not in the least.

Whatever the future holds and juries decide, we hope these two are able to amicably co-parent their daughter Dream. And if not, rest assured their progeny, a powerful Scorpio born November 10, 2016, will be more than capable of enduring and overcoming the trauma, legal trials and familial tribulations of her forbearers. As for Rob and Chyna, may they both find themselves in healthy, happy relationships devoid of literal and metaphorical weapons, social media and other methods of psychological warfare. Live long and proceed with caution you two, best of luck..

Astrologer Reda Wigle researches and irreverently reports back on planetary configurations and their effect on each zodiac sign. Her horoscopes integrate history, poetry, pop culture and personal experience. She is also an accomplished writer who has profiled a variety of artists and performers, as well as extensively chronicled her experiences while traveling. Among the many intriguing topics she has tackled are cemetery etiquette, her love for dive bars, Cuban Airbnbs, a “girls guide” to strip clubs and the “weirdest” foods available abroad.