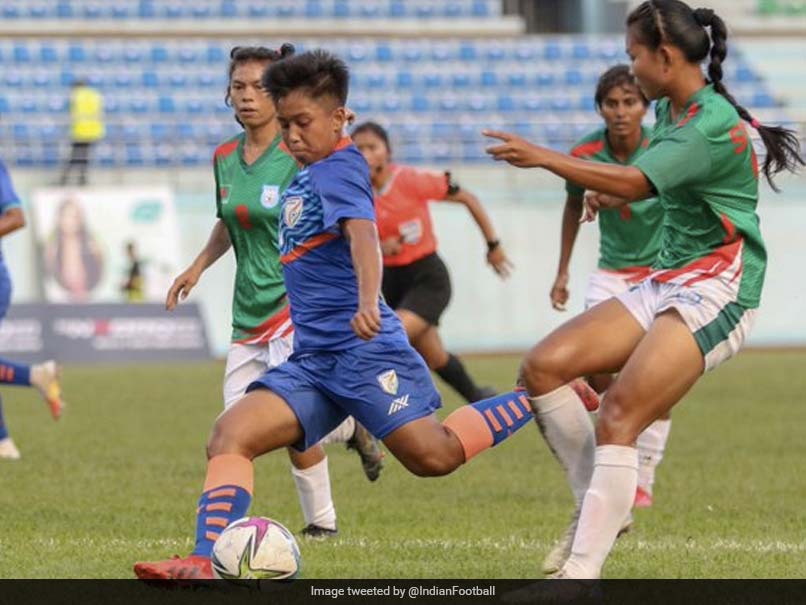 The Indian women’s team suffered a 0-3 loss at the hands of Bangladesh in its third and final group match of the SAFF Women’s Championship in Kathmandu on Tuesday. MS Jahan Shopna netted a brace for Bangladesh, while Srimoti Sarkar got one to her name, to hand the defeat to India. However, the defeat had no impact on India’s semifinal qualification, as the Blue Tigresses had already booked their spot in the last four, where they are set to take on Nepal on Saturday at the same venue.

Bangladesh had the early impetus, and took the lead in the 12th minute, when Sarkar threaded a ball through to Shopna, who slotted in between two defenders, and sent it past the keeper, to put her side in the lead.

India had their first chance of the game on the 19th, when Anju Tamang earned a free-kick 22 yards from goal. Youngster Priyangka Devi stepped up to the dead ball, but curled it just wide of the woodwork.

Minutes later, Sarkar doubled Bangladesh’s lead, as she darted into the Indian box from the left flank and finished past the keeper.

India tried to attempt several long diagonals to catch the Bangladeshi high-line off guard, but to no avail, as the first half soon came to an end with the latter taking a two-goal lead into the tunnel.

The Blue Tigresses started off well in the second half, and soon earned a free-kick on the right flank, that was sent in by Priyangka, towards Renu, who had broken free of her marker.

However, the ball took an awkward bounce off the turn, ricocheted off Renu’s stomach and went safely into Bangladesh keeper Rupna Chakma’s hands.