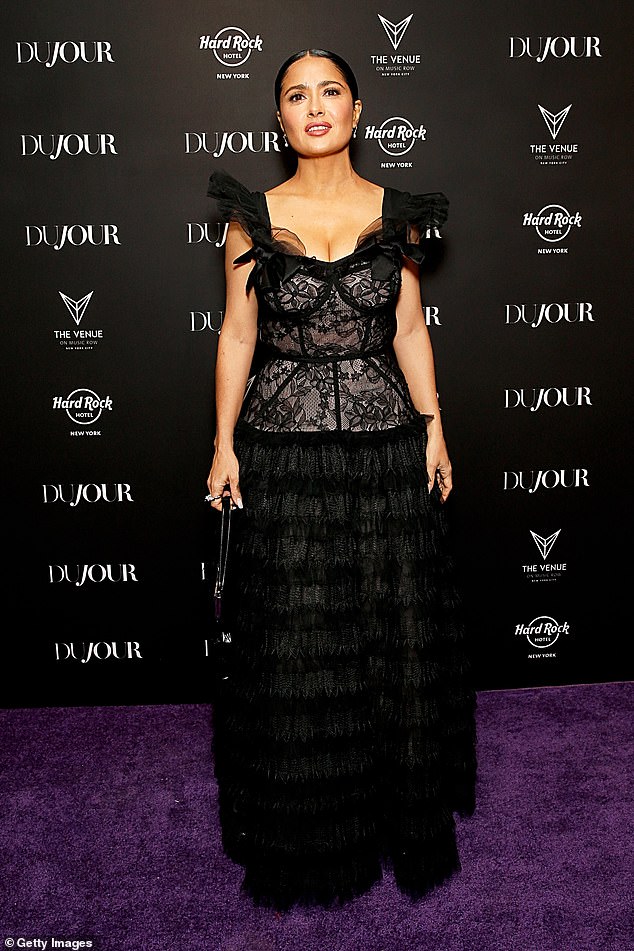 Salma Hayek looked very youthful while donning a corseted gown as she stepped onto the red carpet along other celebrities at the 10th Anniversary of DuJour event in NYC on Monday.

The From Dusk Till Dawn actress, 56, glammed up for the night to celebrate the magazine and her eye-catching cover for the 10th Anniversary Winter issue.

The talented star has been filtering through a busy schedule, and was recently spotted in London stylishly attending the screening of Le Pupille earlier this month in December.

Wow! Salma Hayek, 56, made a stunning appearance as she attended the 10th Anniversary of DuJour event in New York City on Monday

The Desperado actress was radiant as she posed on the purple carpet upon arriving at the Hard Rock Hotel for the celebratory event.

She opted for an elegant dress which comprised of a drop down, lace corseted top with ruffled straps and black bows on each side.

The bottom of the full skirt was made of a ruffled, tulle material that flowed down onto the ground.

Salma held a chic, black handbag in her right hand as she paused for a fashionable photo session as the magazine’s current cover star. 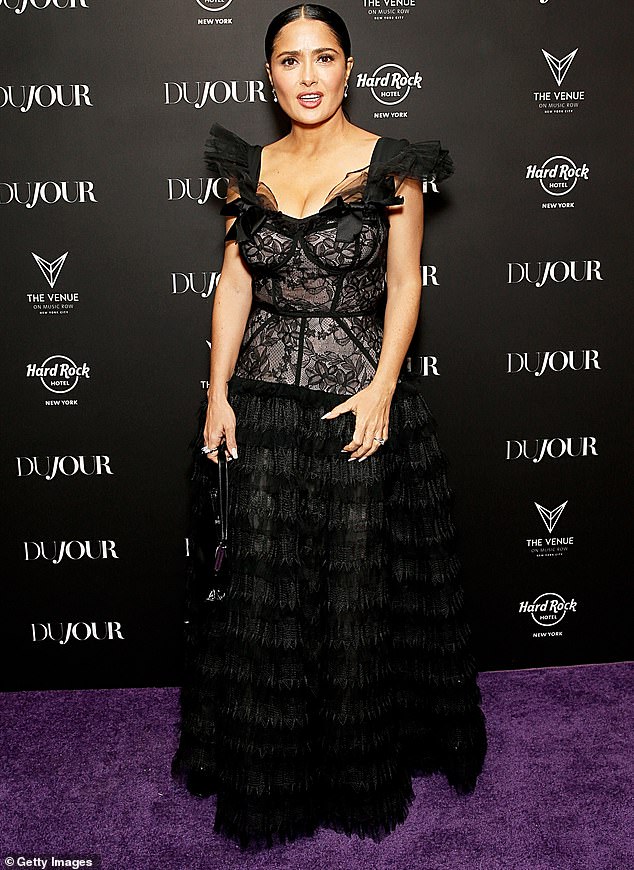 Beautiful: The talented actress donned a dress with a corseted, lace covered top and a full, tulle skirt for the special event 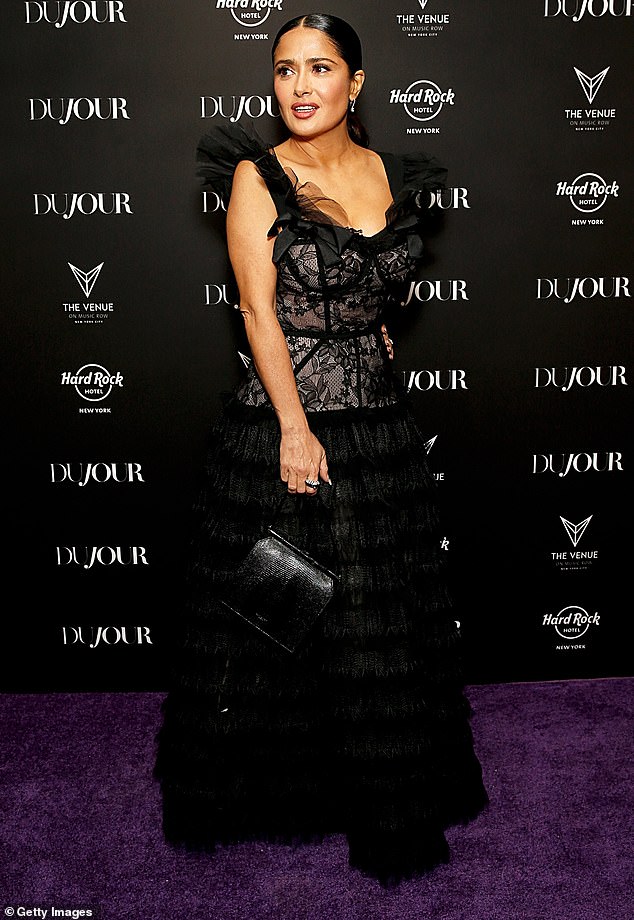 Radiant: The From Dusk Till Dawn star looked very youthful as she attended the anniversary celebration as DuJour Magazine’s current cover star

Her hair was parted in the middle, and pulled back into a sleek up do, revealing a pair of dainty, silver earrings.

She further accessorized her look for the night with a large, flashy ring on her right hand, but opted to not add a necklace to allow the gown to be the main focal point.

Her makeup was classically done, comprising of a layer of black mascara and eyeliner, along with a classic pink blush on her cheeks. She also added glossy, pink lipstick for a final touch.

During an interview with Vogue Mexico earlier this year in April with her daughter, Valentina, 15, whom she shares with husband, Francois-Henri Pinault, Salma opened up about doing her makeup.

‘I’m good at makeup,’ Salam stated, but then admitted, ‘but now she teaches me,’ referencing to her teenage daughter. 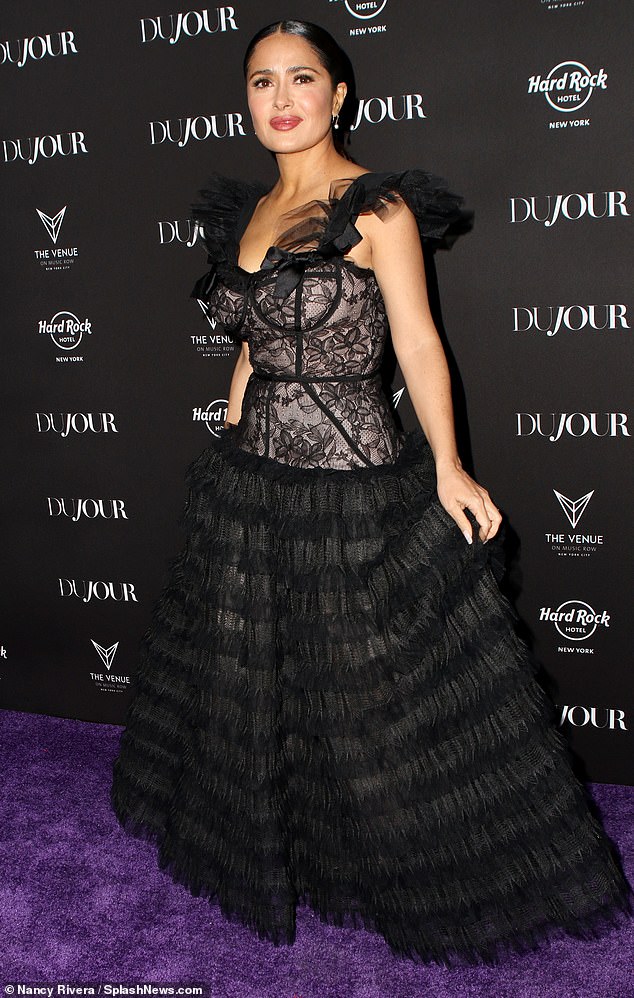 Posing: Salma flashed a small smile as she posed for photos and showed off her glamorous dress for the cameras 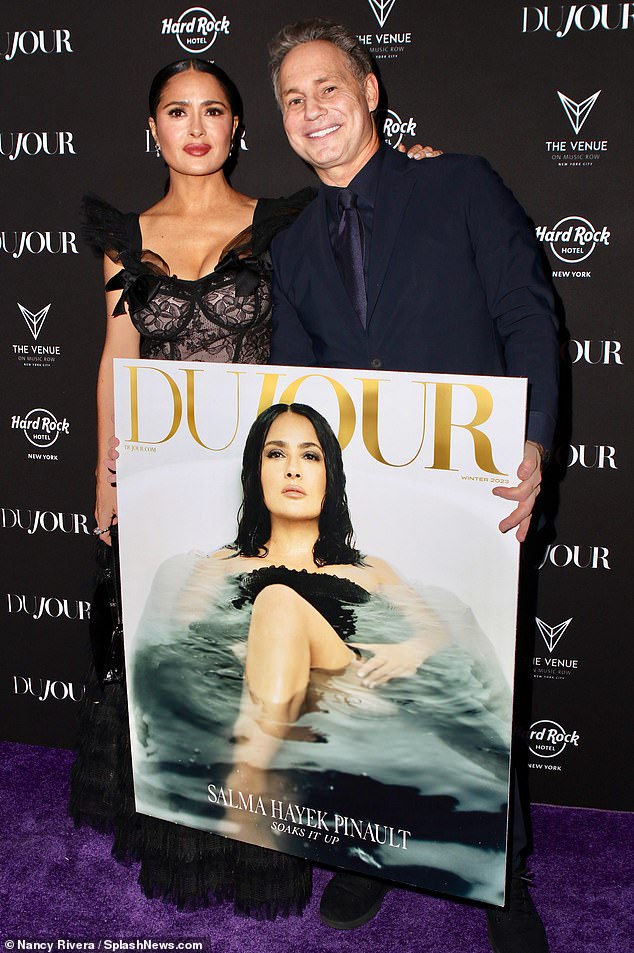 Cover star! The actress was DuJour’s 10th Anniversary cover star and took a snap on the red carpet with the publication’s founder, Jason Binn, as they held a large cutout of her cover 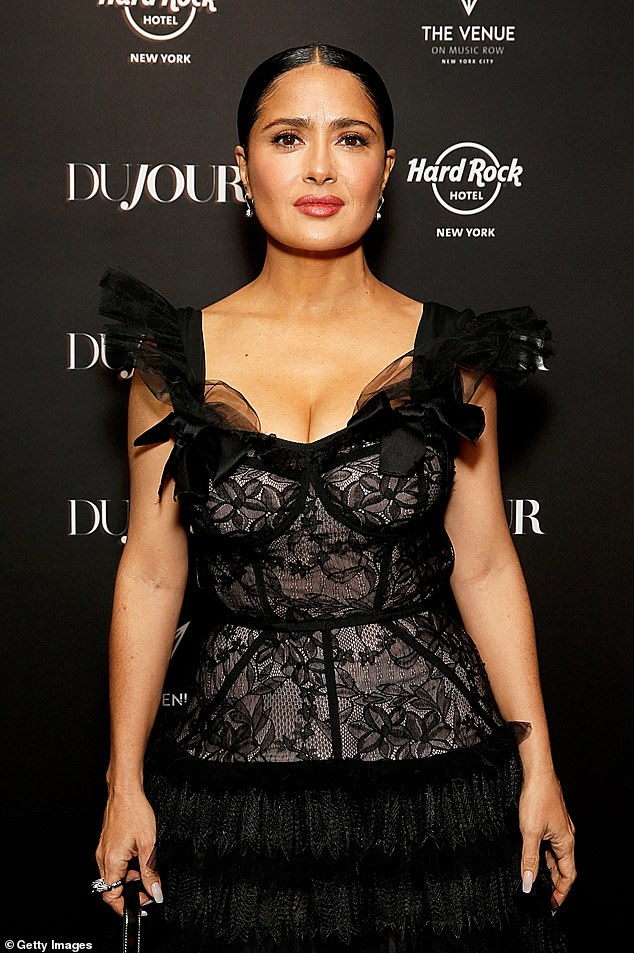 Makeup tips: Earlier in April, Salma admitted during an interview with Vogue Mexico that her daughter, Valentina, 15, helps her with makeup advice

While on the purple carpet, Salma was joined by DuJour’s founder, Jason Binn, and the two quickly took a few memorable photos together.

He was also seen holding a large cutout of the actress’s cover photo for the publication’s Winter 2022 edition.

Salma could be seen partially submerged in a bathtub filled with water, while wearing a stunning black gown. At the bottom, a caption read: ‘Salma Hayek Pinault Soaks It Up.’

According to Yahoo Finance, the Frida actress is featured on a total of 12 pages in the anniversary issue, with the photos taken at the NoMad Hotel located in London.

However, the Winter 2022 issue is not the first time the beauty has graced the cover of the luxury lifestyle publication, and was also seen on the cover for its Spring 2017 editorial. 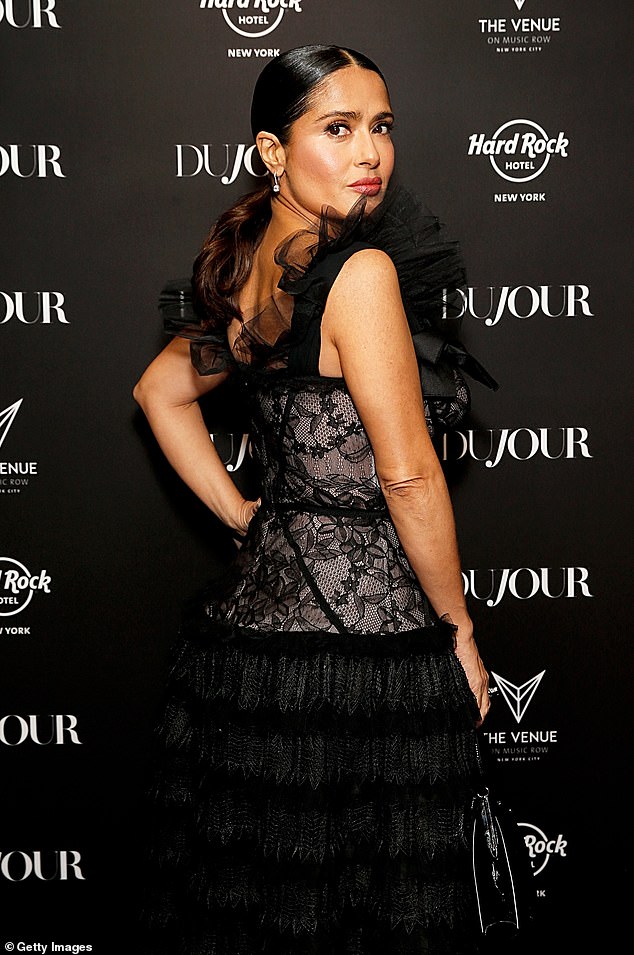 Showcasing her look: The beauty turned around to show the back portion of the lace and tulle dress 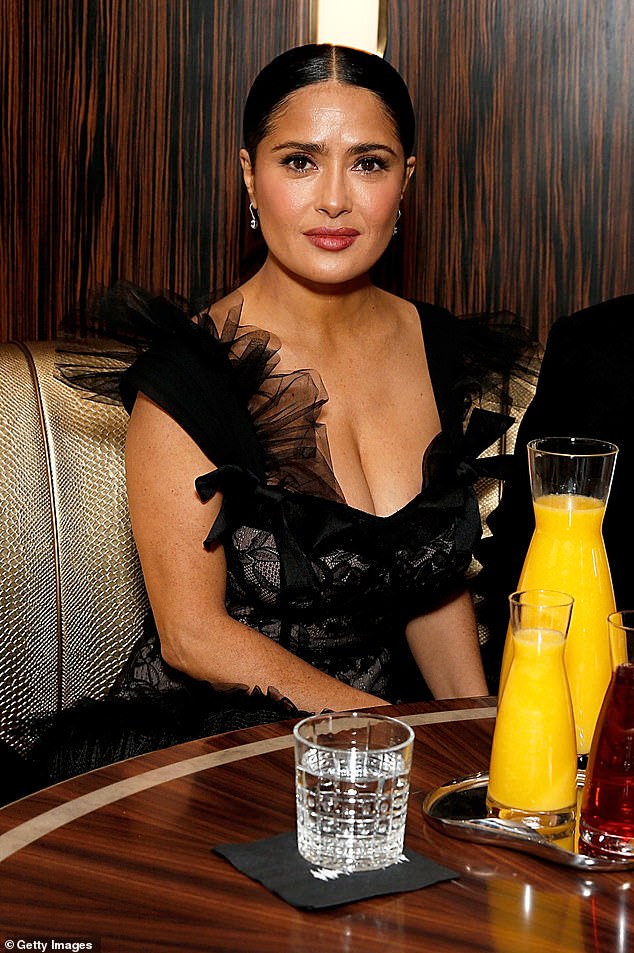 Elegant: Once inside the NYC venue, the star was pictured lounging at a table with other fellow guests 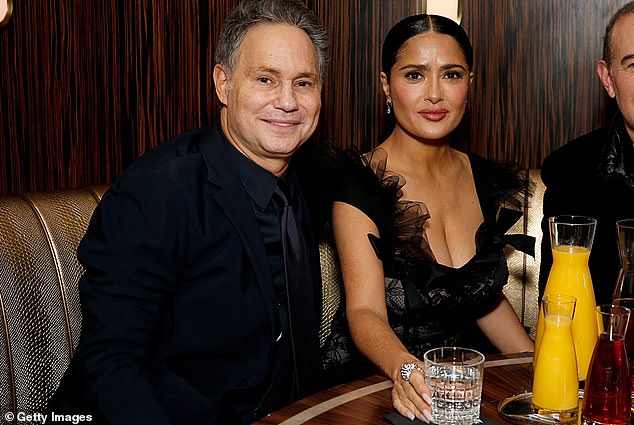 Celebration! The founder of DuJour Media, Jason, was seen sitting next to Salma as the two caught up at the event 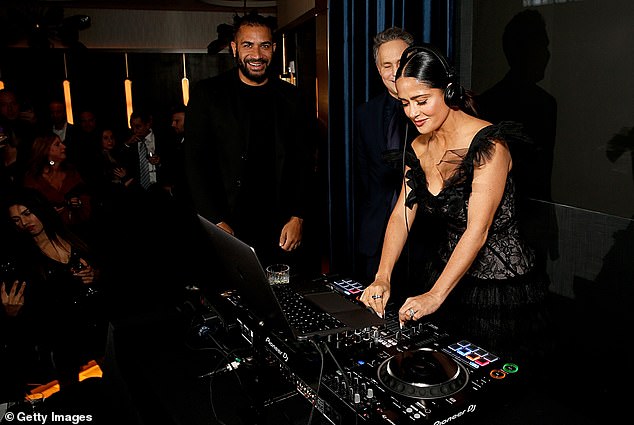 Having fun! Salma later decided try out her DJ skills and threw on a set of headphones as she played a few tunes for the star-studded guests

After posing for various photos upon arriving at the Hard Rock Hotel, Salma was later pictured lounging at a table as she sipped on a refreshing drink and caught up with other guests, such as DuJour CEO, Jason.

She was also seen testing out her skills as a DJ, and was photographed standing at the technical booth with headphones placed on her head as she played a few tunes for the star-studded attendees.

Along with making a glammed up appearance at the anniversary celebration, Salma has also been preparing for her latest film, Puss In Boot: The Last Wish, to premiere in theaters later this month on December 21.

The family-friendly animation follows the premise of Puss as he, ‘sets out on an epic journey to find the mythical Last Wish and restore his nine lives,’ according to IMDB.

Salma was cast to voice the character of Kitty Softpaws, Antonio Banderas as Puss, and Florence Pugh as Goldilocks. 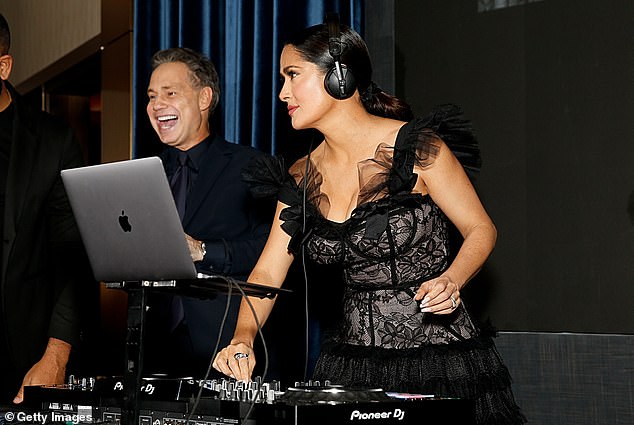 Party time: The star appeared to have a blast as she took a turn at the DJ booth during the night 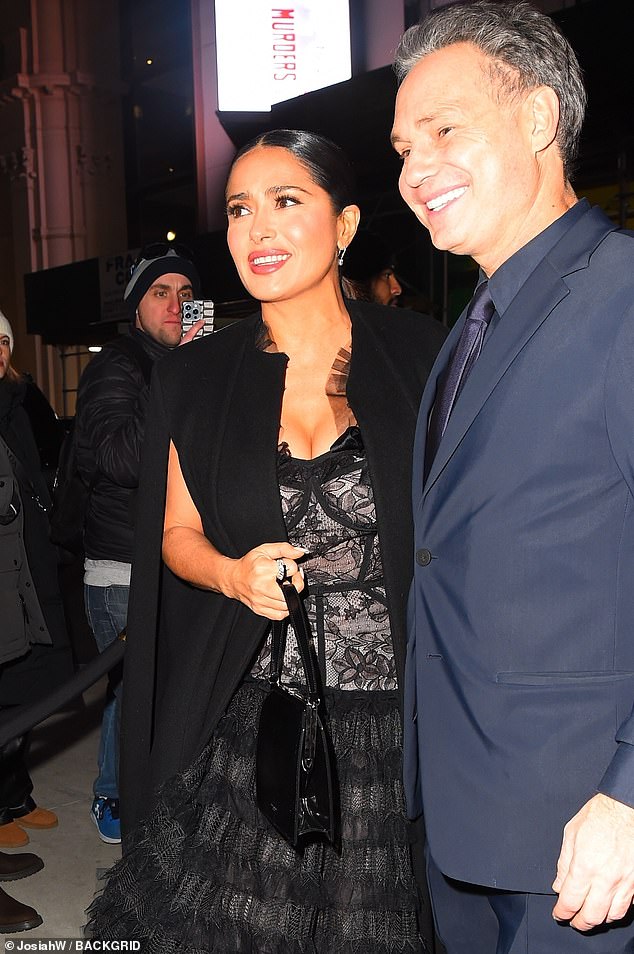 Classy: The mother of Valentina, 15, whom she shares with Kering CEO, Francois-Henri Pinault, put on a classy appearance at the celebration 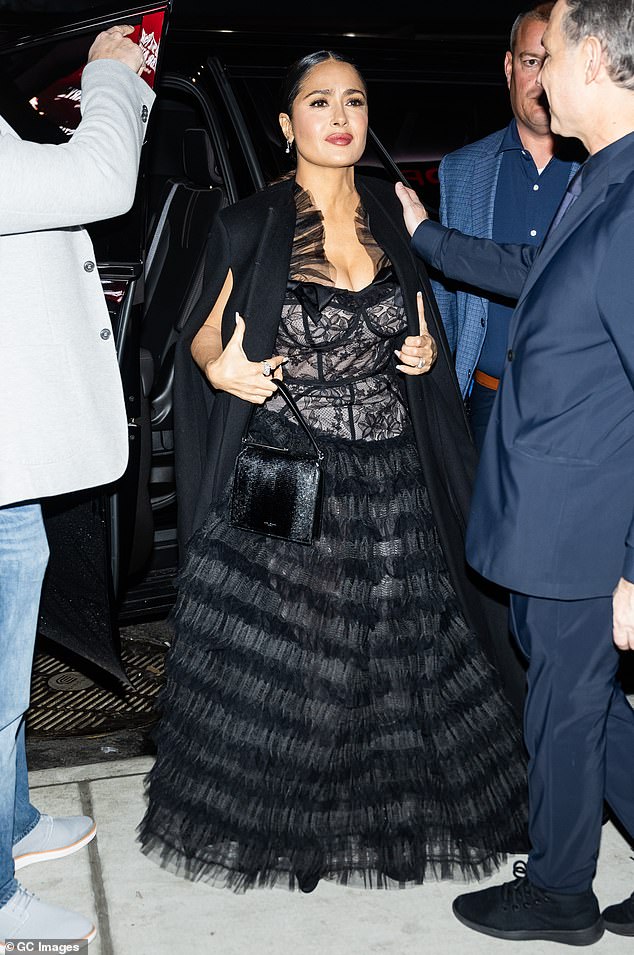 She has arrived! Earlier in the evening, the actress was also pictured making her grand arrival at the venue 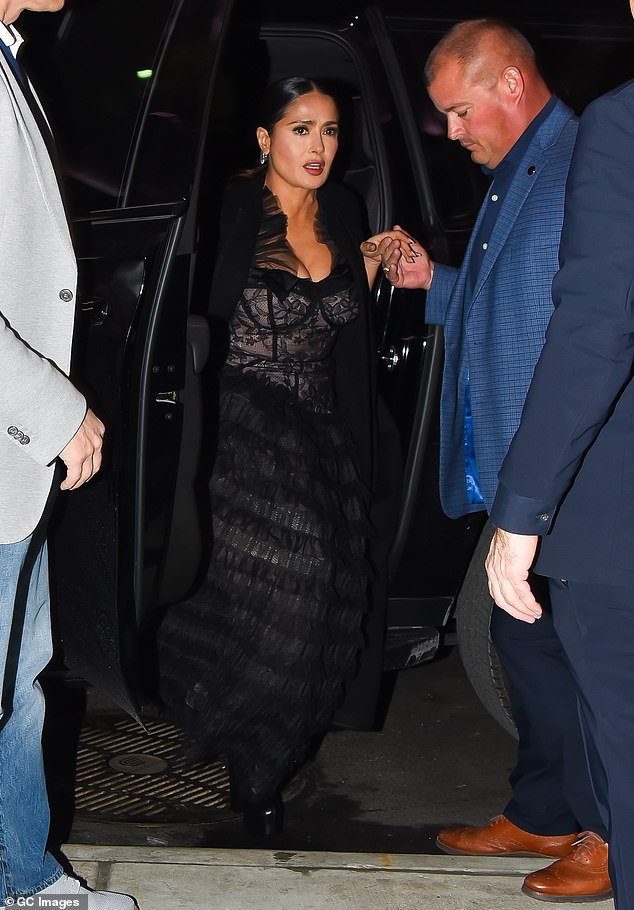 A helpful hand: She was helped out of her car as she stepped out onto the crowded sidewalk

The talented beauty was also cast to join the Magic Mike franchise, and took on a leading role as a wealthy socialite in Magic Mike’s Last Dance. The film is set to premiere in theaters next year in February 2023.

Earlier on Monday, Salma was pictured making a grand arrival at the anniversary event, and was pictured stepping out of her vehicle.

To stay warm in the brisk weather, the Eternals star had donned a black, caped jacket which she later removed.

As she stepped onto the crowded sidewalk, the actress flashed a glimpse of a pair of closed-toed, black platform heels she had worn with her one-of-a-kind dress. 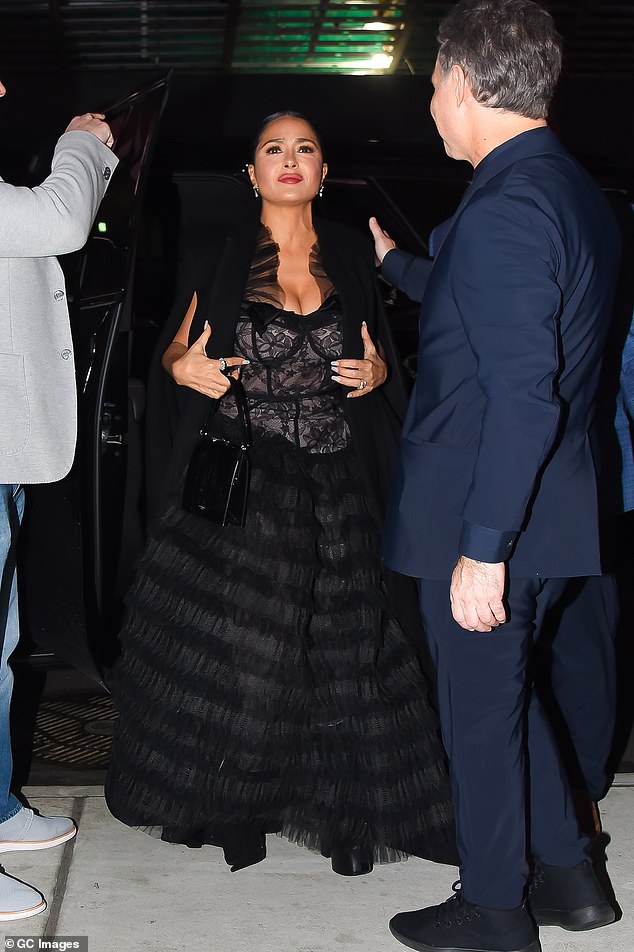 Welcomed: As soon as she arrived, the beauty was welcomed by DuJour founder, Jason 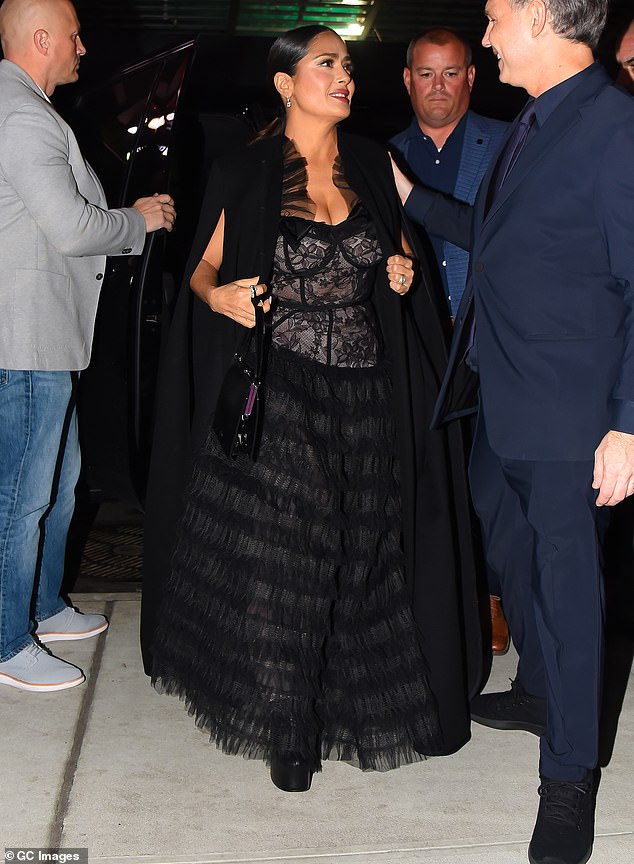 Big night: Salma has previously been featured in an editorial for DuJour, such as the Spring 2017 issue 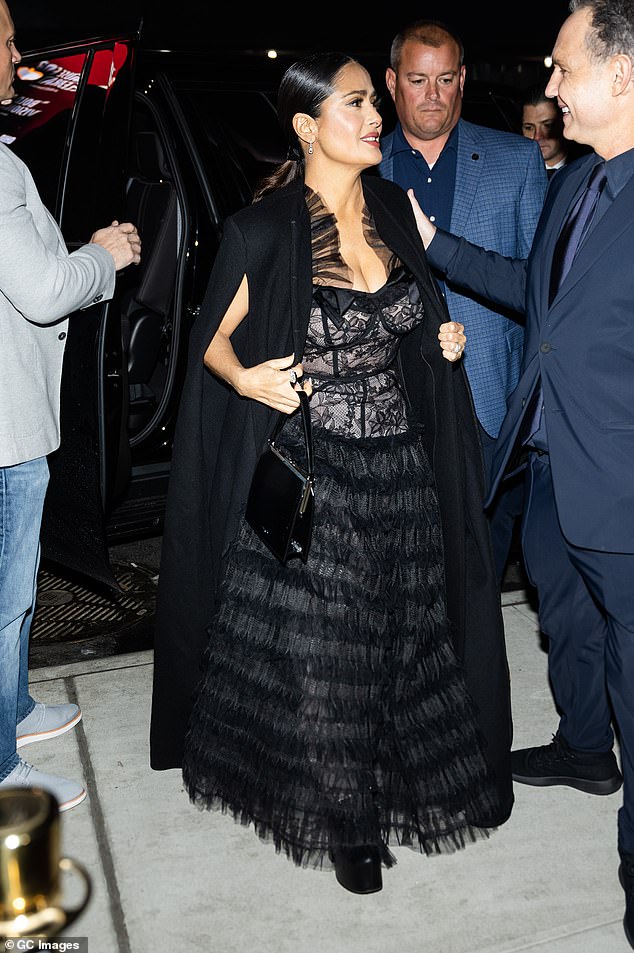 Picture perfect: Salma was a vision that evening 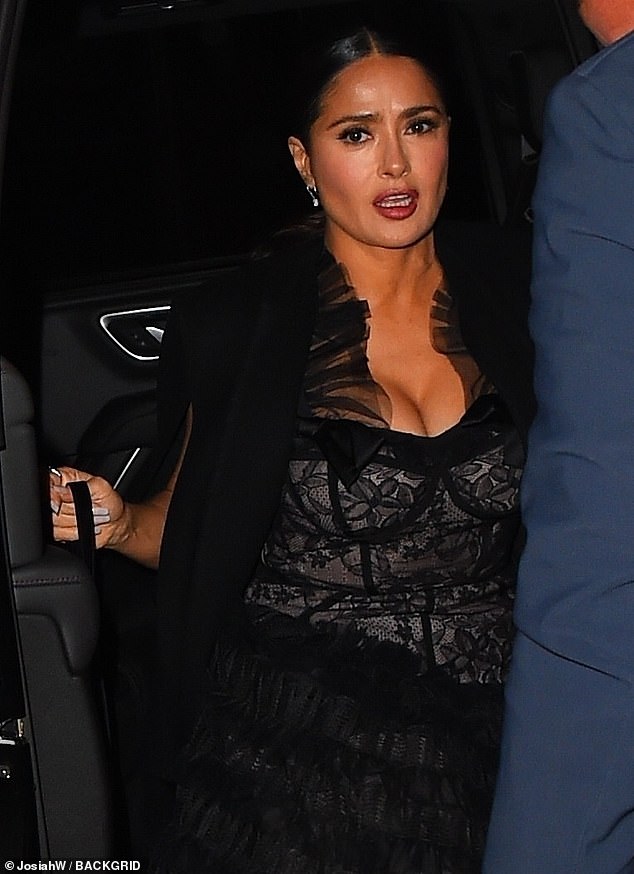 Upcoming project: Salma has also been preparing for her latest film, Puss In Boot: The Last Wish, to premiere in theaters later this month on December 21

Other talented stars at event included actor, Cuba Gooding Jr. The actor donned a pair of black trousers along with a metallic silver and black dress shirt.

TV personality, Jonathan Cheban, was also seen inside the venue, and opted to wear a plain black T-shirt while donning a black velvet jacket on top for a layer of warmth.

His blonde hair was easily slicked back, and he accessorized his outfit with a gold and neon green watch. 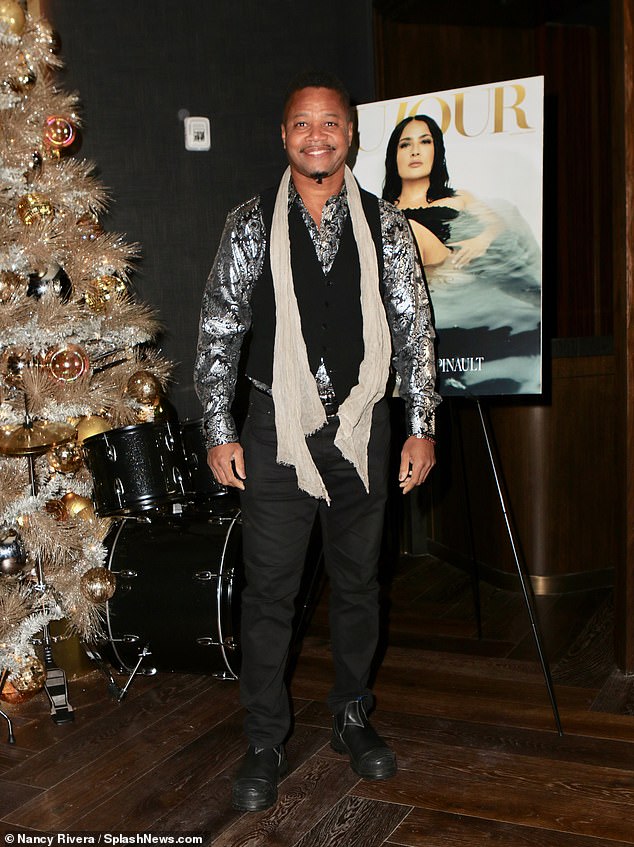 Also in attendance: Oscar winner, Cuba Gooding Jr., donned a pair of black trousers along with a metallic silver and black dress shirt 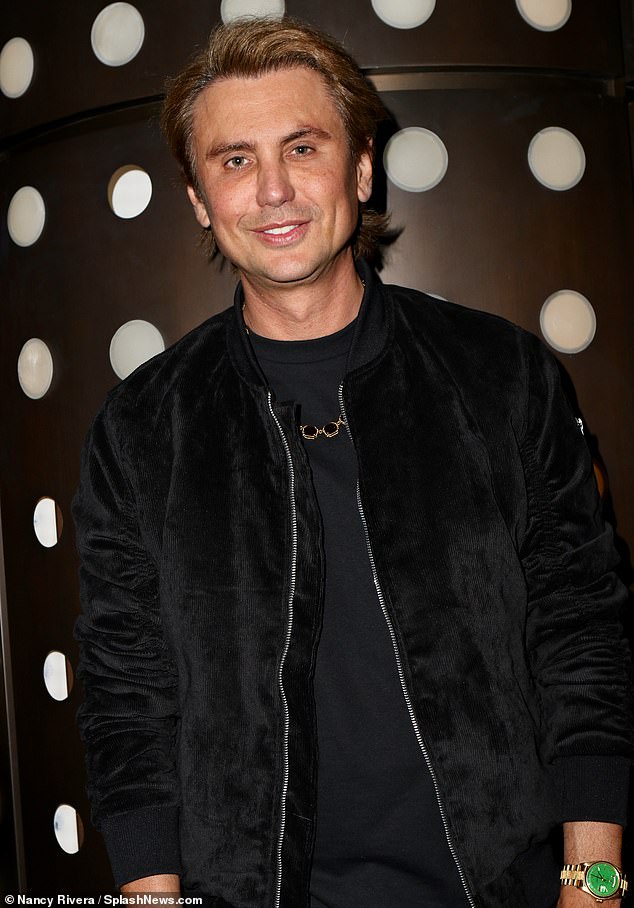 Keeping it casual: TV personality, Jonathan Cheban, donned a black shirt along with a black velvet jacket, and gold and neon green watch for a pop of color