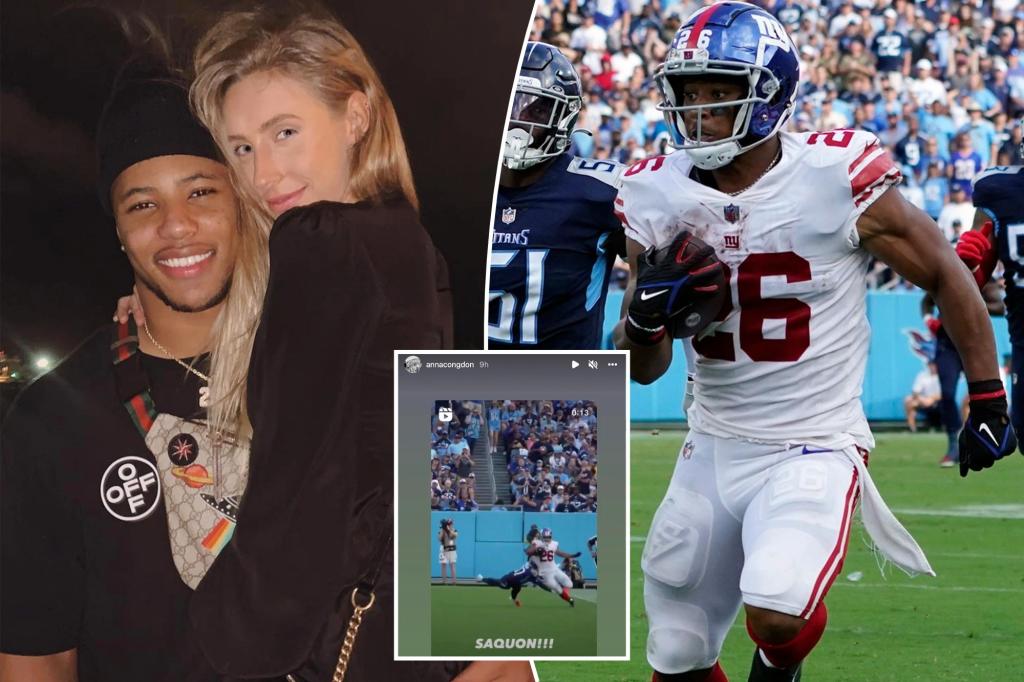 No one appeared to be more excited about Saquon Barkley’s explosive outing on Sunday than his longtime girlfriend, Anna Congdon.

Taking to her Instagram Stories, Congdon — who shares 4-year-old daughter Jada with the Giants running back — re-posted a video from the team’s page that featured one of Barkley’s many highlights from the season opener versus the Titans, notably his 68-yard run in the third quarter.

Barkley’s massive gain served as a momentum swing for the Giants, who stormed back in the second half for a 21-20 lead, thanks in part to head coach Brian Daboll’s gutsy gamble to go for a two-point conversion in the fourth quarter. With the clock winding down, the Titans tried to put the game away with a 47-yard field goal attempt from Randy Bullock, only to have the kick sail wide left.

The Giants then squeaked out a win — their first Week 1 victory since 2016. Barkley, the team’s second overall pick in 2018, capped off a stellar day with 164 rushing yards for 18 carries and one touchdown. He also recorded 30 receiving yards.

“We got the best back in the league, and he showed it today,” Barkley’s teammate, wide receiver Sterling Shepard, said postgame. “There’s nothing else to be said.”

Barkley entered his fifth year in the league by putting everyone on notice, two seasons removed from a torn ACL. During an August appearance on the “2nd Wind” podcast, Barkley remarked that he was “ready to go crazy.”

“Last year was more like, ‘Dang, the game was taken away from me.’ I never had a season where I didn’t go and play football,” he said. “Now, it’s a kill mindset. Now it’s like, you know what? F—k everybody. I’m ready to go crazy.”

With the Giants set to face the 0-1 Panthers next weekend at MetLife Stadium, expect Barkley to receive a warm welcome from the hometown crowd, which could possibly include Congdon. Though the two have kept much of their relationship under wraps, Barkley told the Giants’ official website in May how she encouraged him to pursue his undergraduate degree from Penn State.

“It was easy. It was online. It was something I wanted to do, get my college degree, and I was able to accomplish that.”