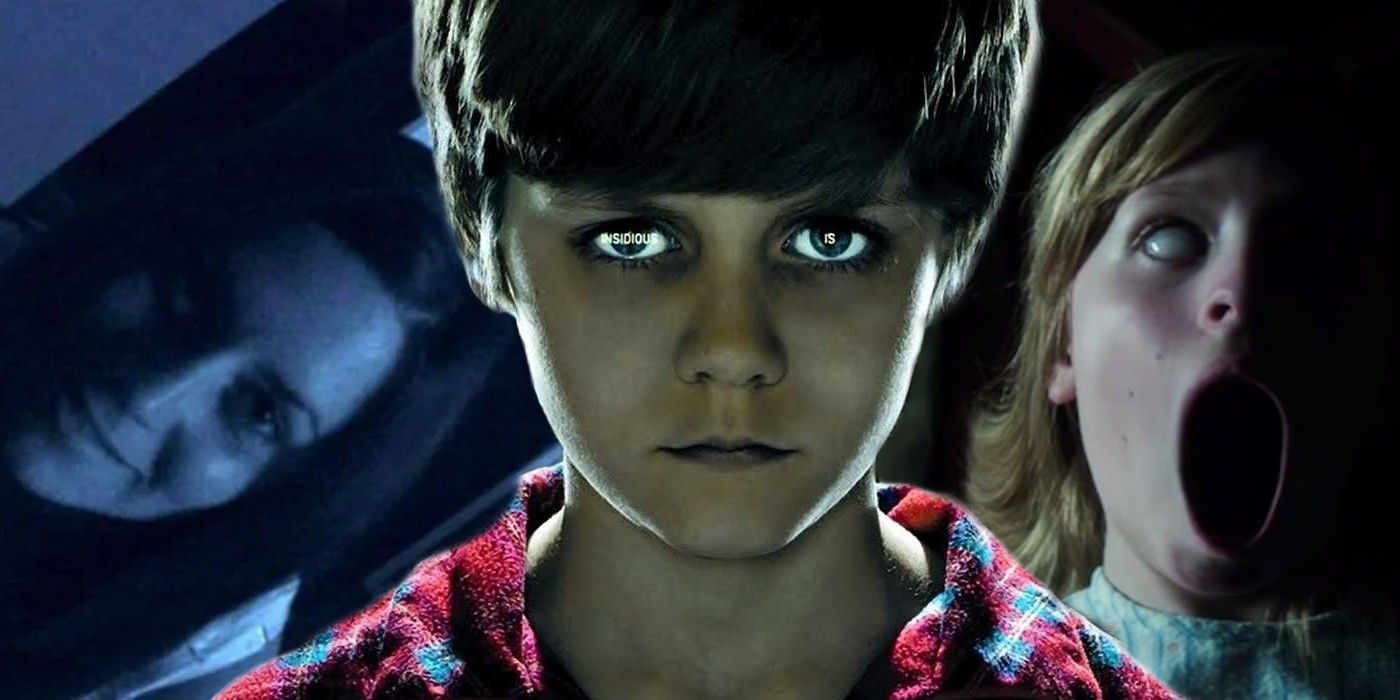 One of the biggest reasons horror has become so popular is the fear of the unknown. From the earliest days of literature, demon and ghost stories have ignited the imagination and fear of any who dare partake. This carried over into the world of film, as one of the most prolific subgenres of horror are tales involving possession.

Updated December 11th, 2022: If you love the thrills and chills that possession films provide, you’ll be happy to know this article has been updated with additional content and titles.

Whether cautionary tales or supposedly based on true stories, these movies are a dime a dozen. The thing is, there is a reason they are so popular. People love a good possession, and here are some of the most chilling and unnerving the genre has to offer.

The great Anthony Hopkins delivers a gripping performance as a veteran Jesuit exorcist in 2011’s spine-tingling horror film The Rite, portraying Father Lucas Trevant as he attempts to show seminary student Michael the terrifying realities of demonic possession in the Vatican. The picture is loosely inspired by Matt Baglio’s novel The Rite: The Making of a Modern Exorcist, which recounts an exorcist-in-training’s experiences in Rome while working with seasoned clergy, and highlights the aspiring young priest’s questioning of demons and the devil.

Trevant sets out to save a pregnant 16-year-old girl whom they believe to be possessed, and Michael is left in shock after witnessing her cough up three nails and speak perfect English despite only knowing Italian. The Rite has plenty of chilling moments that will have you anxiously looking over your shoulder, and offers dueling perspectives on the concept of possession.

It is rare when a remake stands out above the original, and this is the case with 2005’s Amityville Horror remake. Both films are based on the 1977 true crime novel about the Lutz family’s supposed haunting. The Amityville house gained notoriety when Ronald DeFeo Jr. murdered his family one night in 1974. DeFeo claimed spirits told him to do so, and thus the legend of Amityville was born. The film follows the Lutz family.

George Lutz (played chillingly by Ryan Reynolds) slowly loses his grip on reality, until he finally gives into sanity and attempts to follow in Ronald DeFeo’s footsteps. What makes this film so great is the inclusion of Reynolds. He begins the film as his typical screwball self, but gradually slips into madness and gives an admirably terrifying performance. Typically, a film that claims to be true is a marketing ploy, but the Lutz family was very real, even if their haunting tale has many doubters.

The 2005 found footage Japanese horror picture Noroi: The Curse tells the chilling tale of a paranormal researcher who seemingly vanishes after exploring the legend of a powerful ancient demon known as “kagutaba”, having investigated a series of possessions and mysterious phenomena before his eerie disappearance. The foreboding and uneasy atmosphere and disturbing footage makes the frightening flick all the more nerve-wracking, as audiences witness creepy clips including a ritual gone awry, demonic disembodied voices and slaughtered animals.

Noroi: The Curse superbly captures an unsettling ambiance that instantly puts you on edge, and the constantly building tension and sinister imagery only heightens the viewer’s paranoia. It has since been lauded as one of the greatest found footage films of all time, having been praised for “delivering an engrossing and increasingly terrifying experience packaged in the form of a supremely competent production.”

From 2007 to 2015, there was a new Paranormal Activity film almost every year save for 2008, 2009, and 2013. With so many films, it is easy to dismiss this found-footage paranormal movie series as a cash grab that ran out of steam. While this may be the case, fans often forget that the first film was a genuinely chilling experience. Innovating the already dying found footage genre, the entire film is presented as an actually filmed account of a couple who encounter a demonic spirit.

The film doesn’t even have studio logos, instead opening with “Paramount Pictures would like to thank the families of Micah Sloate & Katie Featherson and the San Diego Police Department,” further insinuating that this is the real deal. What makes this Paranormal Activity movie so chilling, is the fact the demon is never actually shown. Also, most people have had the fear that something otherworldly happens while they sleep, and this film taps into that fear.

A film that states right at the beginning the titular character dies doesn’t seem like it would be very suspenseful, but The Exorcism of Emily Rose is an exception, following the trail of a priest who is accused of aiding in the death of the titular Emily Rose. The priest claims he was attempting to exorcise a demon, and it got the best of her. Most of the film is told in flashbacks and shows Emily as she gradually becomes worse and worse.

Related: Some Of The Scariest Movies From Japan, Ranked

The movie is very loosely based on the real story of Anneliese Michel, who was supposedly possessed before dying. The Exorcism of Emily Rose is chilling and unnerving, as it never fully states if Emily was actually possessed or just suffering from an undiagnosed disorder. Even though audiences know the outcome, it is still a masterclass in fright and has managed to gain more fans with each passing year.

The Ouija Board has been a subject of many horror movies but didn’t become the star of one until 2014’s Ouija. That film flopped pretty hard and many people claim it is so bad it’s good. The prequel released two years later, however, is a different story. Ouija: Origin of Evil is a much better and scarier film by all accounts.

Modern horror maestro Mike Flannigan helmed the project, and his genius shows. A young single mother runs a séance scam with her daughters. When they bring in a Ouija Board as a prop, the youngest daughter becomes possessed. In addition to being a genuinely creepy movie, film buffs will appreciate the fact the movie is shot to appear as if it was released in the ’60s, complete with classic studio logos and film reel cue marks.

A horror movie doesn’t need an R rating to be scary, and James Wan proved this with Insidious. The Insidious franchise has proven to be one of the best horror series of the modern age, but the first stands out. The film follows a family who discovers their new home is haunted in the most disturbing ways.

Unlike most haunted house movies, the family moves as soon as they can. This proves to be fruitless, as the demonic entity has latched on to the youngest son and moves right along with them. The father (Patrick Wilson) must travel into his son’s mind while facing his own past along the way. This movie takes the clichéd haunted house story and re-invents it. From smart characters to jump scares in broad daylight, Insidious takes horror fans’ expectations and flips them on their head.

James Wan once again proves he knows how to do horror with The Conjuring. Based on real case files of late paranormal investigators Ed and Lorraine Warren, the film follows the couple as they investigate the haunting of the Perron family. The Conjuring understands what the key ingredient in any great horror film is — atmosphere.

It doesn’t rely on countless jump scares or relentless gore, it uses atmosphere and the characters to tell a chilling, scary, and supposedly true story. This film spawned a whole Conjuring movie universe, most of which are fantastic in their own right. This film is the perfect cocktail of fright, with James Wan mixing it all together.

As the film’s title suggests, this entry truly is sinister. The idea of snuff films being found at random is a tale that has been spread since home video became readily available. This film taps into that fear and heavily expands on it. Ethan Hawke plays a true-crime writer who moves his family into a new home. He discovers a box of 8mm film reels in the attic, and each one is a snuff film depicting a child murdering their families in gruesome ways.

He soon discovers the children were possessed by an evil spirit, and it is after his family next. Sinisterfinds much of its scares in the unsettling 8mm films that are shown throughout. What makes it even worse is the evil spirit is actually shown at various points throughout the film, and the audience is none the wiser until it is all revealed before the shocking ending.

While Ash Williams and the Evil Dead series has delved into horror-comedy territory, the original film is pure horror. A group of friends travels to an isolated cabin to get away from their lives for a bit, where they discover a book bound in human flesh along with a tape recorder of a man translating it. They unwillingly unleash evil spirits in and around the cabin, and they suffer an unspeakable nightmare.

Bruce Campbell debuts as Ash, but he is far from the chainsaw-toting, wise-cracking Deadite slayer fans know him as in some of the grooviest Campbell movies. He is a normal guy desperately fighting for survival as his own friends are tormented and possessed all around him. The film is low budget and may be seen as cheesy, but this gory innovator is still a frightening piece of horror history.

Since its release in 1973, The Exorcist has received the title of the scariest movie of all time. While this is debatable by today’s standards, there is no doubt the film holds up as a disturbing masterpiece of horror. 12-year-old Regan MacNeil becomes possessed by a demonic force, leading her mother to hire an exorcist. The highlight of the film is young Linda Blair as Regan. While modern films would hire an adult actress who looks young, Linda Blair was actually 12 when she appeared in The Exorcist.

Related: The Exorcist: Is the Original Still One of the Scariest Horror Movies?

This adds to the unsettling nature, as fans have to remind themselves they are seeing an actual child do the unspeakable things seen on screen. To this day, The Exorcist remains a terrifying film that has stood the test of time, becoming one of the most important horror films of all time. While certainly scary, one film about possession may take the cake as scariest.

Merging the minds of two icons can only lead to greatness. While considered a flop upon initial release, Stanley Kubrick’s The Shining is now known as one of the greatest horror movies of all time. Based on the novel by horror master Stephen King, The Shining tells the tale of the Torrance family as they spent the winter in a large, empty hotel. The hotel holds a secret, the last caretaker went crazy and killed his family. They soon learn the Overlook holds even more sinister secrets, as the beings that took over the previous caretaker are now coming for them.

The Torrance’s son, Danny, has a special gift. The titular Shining helps young Danny to survive the onslaught of spirits, and ultimately his now insane father, played by Jack Nicholson in one of the most iconic horror performances of all time. Stephen King famously hates the film because it changes much of his book. While the film does take some liberties with King’s story, The Shining is still a fantastic piece of cinema, and arguably the best film about possession there is.