Scientists are developing an app that may diagnose what disease or condition a person has by listening to their cough.

Researchers are recording millions of coughs using several apps including a free  developed by Hyfe Inc, a Delaware-based company.

Then, they are training artificial intelligence (AI) to identify what is causing the person to have the symptom, according to The Wall Street Journal.

In the future, they hope the app can determine if a person has asthma, pneumonia, chronic obstructive pulmonary disease or even COVID-19 – and how severely ill the patient is. 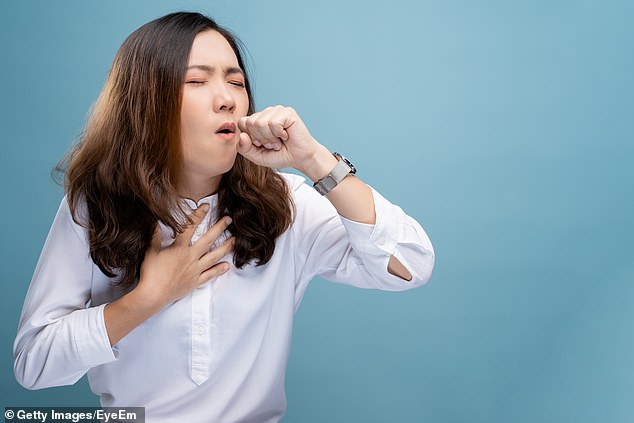 A cough occurs when something that irritates the airways stimulates the body’s nerves, which send a message to the brain.

In response, the brain sends a signal to muscles in the chest and abdomen to expel the irritant using air from the lungs.

Dr Peter Small, a tuberculosis expert and chief medical officer of Hyfe, told The Journal that different diseases have coughs that sound different.

For example, he said that someone who has asthma will wheeze while a patient with pneumonia will have a crackling sound in their lungs.

Small explained that AI may be able to pick up patterns in the cough that humans are unable to detect by simply listening.

What’s more, he told The Journal that when a patient goes to the doctor, they can’t learn everything about the cough in one visit. 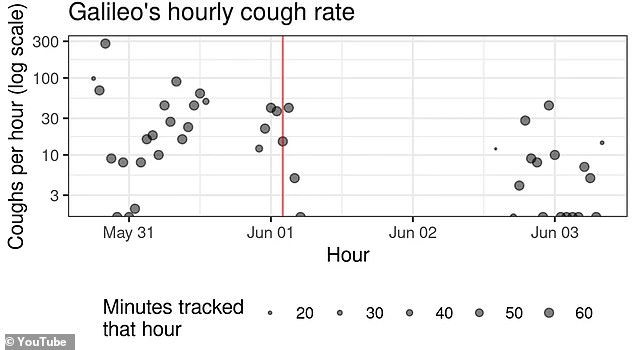 They say the AI may be able to pick up patterns in the cough that humans are unable to detect by simply listening. Pictured: The AI tracking the cough of a three-year-old with pneumonia

‘Pulmonologists will tell you they’re like cardiologists without a blood pressure cuff.’

Researchers say an app would be faster than a doctor’s visit because it could screen hundreds of patients in one day and cheaper because people wouldn’t have to pay to see a healthcare professional.

According to The Journal, Hyfe is conducting a study in Spain in which the apps run all day on a phone and record when there is an explosive sound.

The team found that sometimes a person can start having a coughing fit without realizing that he or she is seriously ill.

One woman’s number of hourly coughs increased three-fold during the night before she was diagnosed with COVID-19, according to the Journal.

However, it was only two days after this occurred that she realized she had a cough.

The Journal notes that cough test apps will not be available to the general public soon because the AI is still being trained and because companies will have to address privacy and data sharing concerns.

Sunlight Exposure / Vitamin D Guidelines May Need To Be Revised

Injection to perk up a man’s love life

As Angela Merkel steps down in Germany, candidates sought to mimic her for the…

‘She went her own way’: the tragic and unusual life of folk…

Nate Diaz shuts down Conor McGregor after Irishman calls his…