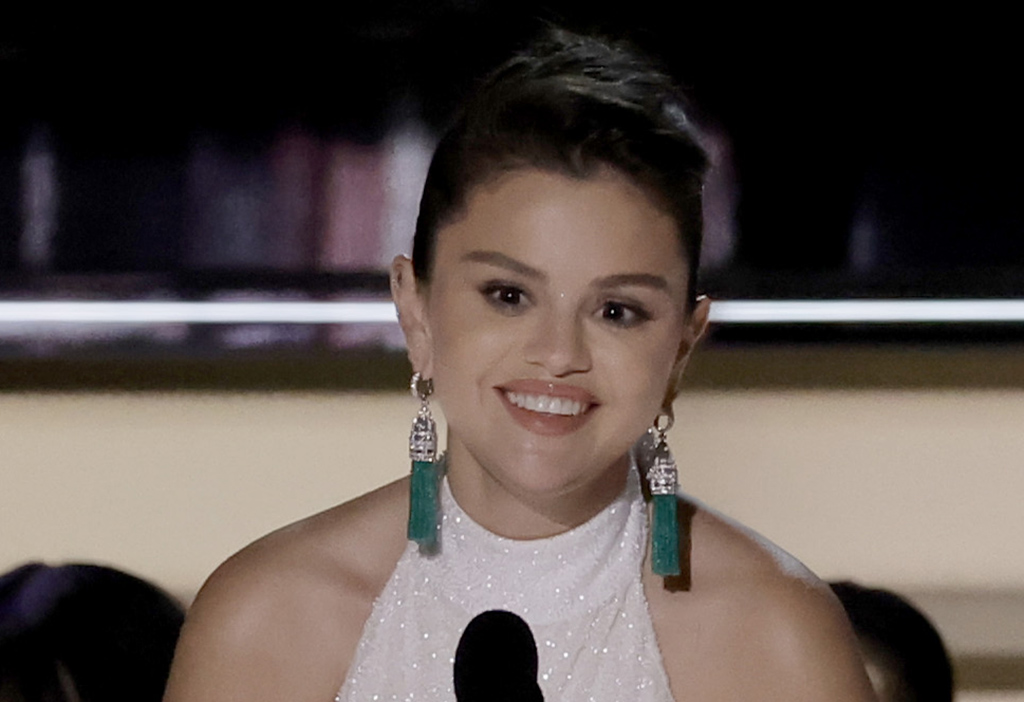 Selena Gomez skipped the carpet dressed in white at the 74th Annual Primetime Emmy Awards at the Microsoft Theater in Los Angeles tonight.

The 30-year-old arrived after the red carpet was over and took to the stage with her fellow “Only Murders in the Building” cast members Martin Short and Steve Martin. Gomez was nominated for Outstanding Comedy Series thanks to her role in the starry Hulu murder-mystery comedy.

The classic straight up and down silhouette was partnered with silver and emerald green dangling earrings and a statement silver ring that bumped up the shine factor ever so slightly. When it came to hair and makeup, Gomez went for a clean up do which she paired with a peachy-toned lip.

The length of the shimmering gown ended up covering up the “Ice Cream” songstress’ shoes, however the brief snapshots of Gomez on stage saw the star wearing some sort of silver sandal. When it comes to footwear, the actress regularly dons metallic sandals and neutral pointed-toe pumps for special events by top brands, including Gianvito Rossi, Aquazzura, Prada and Christian Louboutin. When off-duty, she wears white sneakers that are usually from her brand partner Puma, as well as Ugg slippers. Gomez has furthered her presence in the fashion industry through her impeccable shoe game, citing classic styling and stand-out silhouettes.

The 2022 Emmy Awards celebrate the top performances and programs in television. This year’s ceremony, held at the Microsoft Theater in Los Angeles, will be hosted by Cedric the Entertainer. HBO’s “Succession” is leading the annual event’s 2022 nominations with 25 nominations, followed by “Ted Lasso” (20), “The White Lotus” (20), “Hacks” (17) and “Only Murders in the Building” (17).

PHOTOS: See what other celebrities wore to the 2022 Emmy Awards.