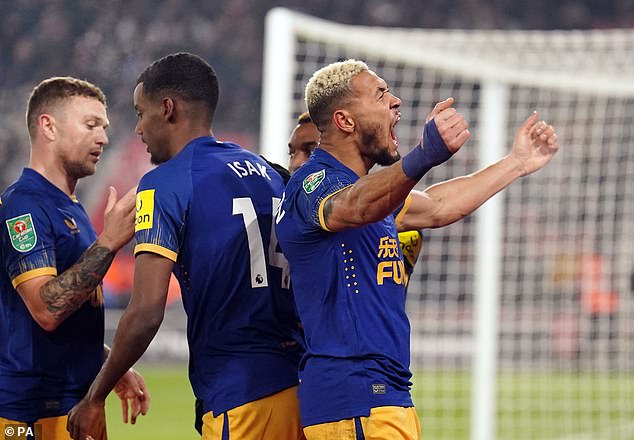 The Doomsday Clock was moved to 90 seconds to midnight yesterday, the closest it has ever been. Here, Newcastle moved to within 90 minutes of Wembley. Which will come first – the planet’s annihilation or Tyneside’s celebration?

It would certainly feel like the end of the world for Eddie Howe and his players were they not able to convert this one-goal advantage into a two-legged victory next Tuesday.

While scientists have warned we are edging towards armageddon and have adjusted their symbolic clock accordingly, a new era is only just beginning at St James’ Park.

After missing an open goal, Joelinton scored the only goal of the game for the visiting Magpies 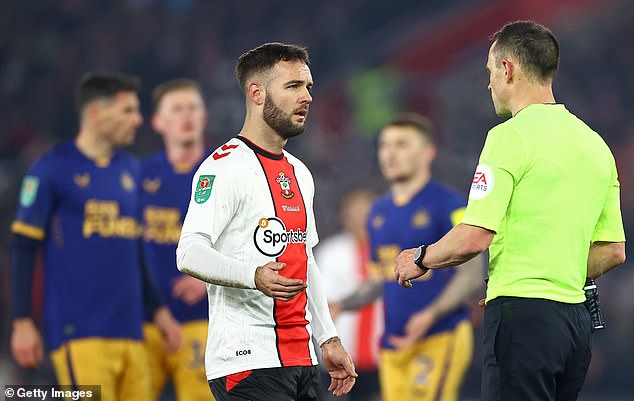 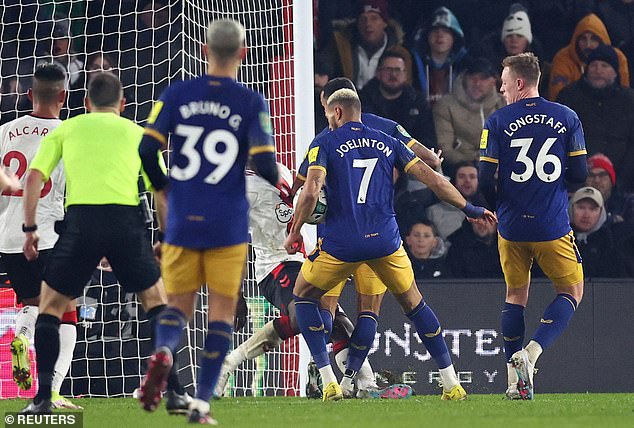 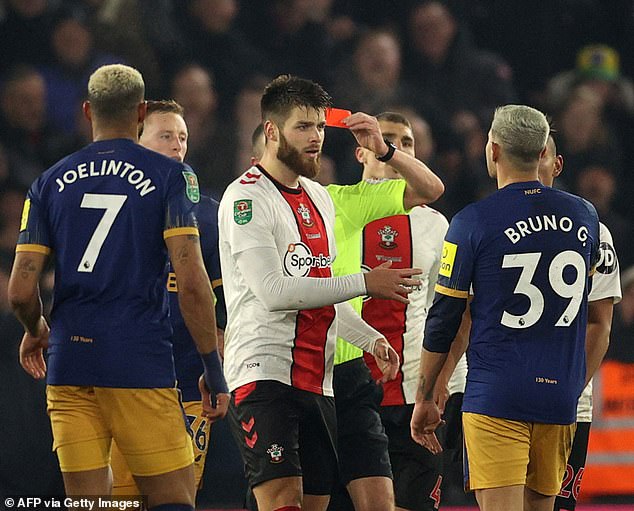 Had you, as recently as 18 months ago, predicted they would now be third in the Premier League and closing in on silverware for the first time in 54 years, those same men in white coats may well have been called in. Instead, it is the men in black and white stripes finding the right formula.

This was not their best performance but Joelinton went from villain to hero in the second half, scoring the winner from the same patch of goalmouth grass from which he had earlier lashed over.

At the other end, Nick Pope made it 10 straight clean sheets and he was busy after the break. Given that run of shutouts, maybe we are safe to assume Newcastle are as good as in the final.

Their route thus far has been kind. A trip to League Two Tranmere was followed by home ties against Premier League opposition outside the top six. Even Southampton’s unlikely defeat of Manchester City in the quarter-final had the feel of the stars aligning.

Because of that, supporters journeyed here more in expectation than hope. As they left the train at Kings Cross before catching the connection to the South Coast, many would have been able to point out their hotel. Not for this game. But for the final at Wembley on February 26. They will be confirming those bookings after this.

For Southampton’s Nathan Jones, the cup competitions have been more than a distraction – they have been a lifeline. It feels like supporters are already waiting to chase their new Welsh boss back to the valleys of Rhondda. Not that he would run. He is a spiky so-and-so and that much was evident by his touchline demeanour here. Frogs in a box are comparatively sane. If only his team played with the same energy every week.

But for a home side in a first leg of opportunity, Saints began far too passively. Come the break, Newcastle goalkeeper Nick Pope had taken to beyond 15 hours the time since he last conceded. His sole save, from Carlos Alcarez’s 20-yard drive, was a clumsy one, but that is what happens when you have so little to do.

Pope was needed in stoppage-time when racing from his area to head clear a throughball. In doing so he flattened Moussa Djenepo, leaving the forward in such a daze that the medical team ushered him straight down the tunnel. On came Geordie boy Adam Armstrong, a player perhaps destined to be at the final either way – be that in the colours of Southampton or supporting his hometown club. 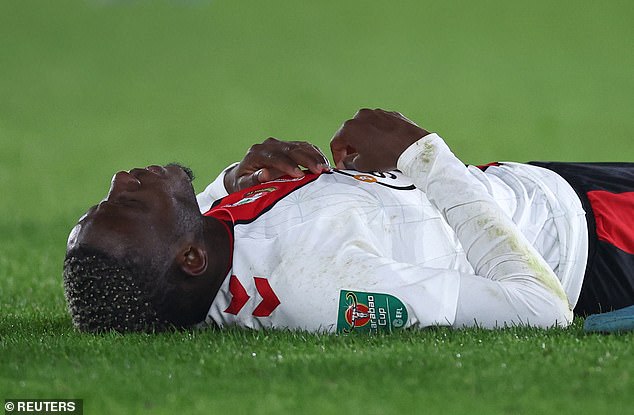 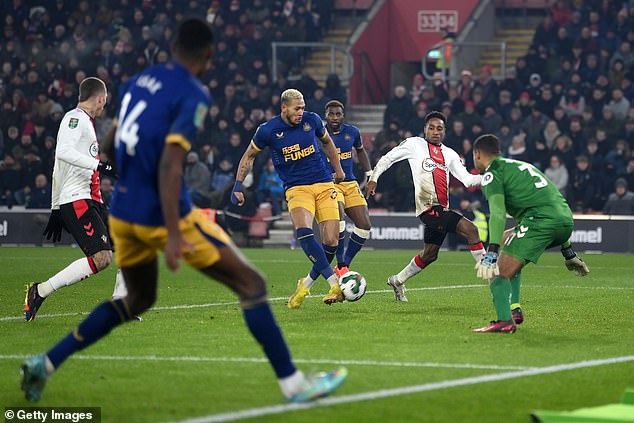 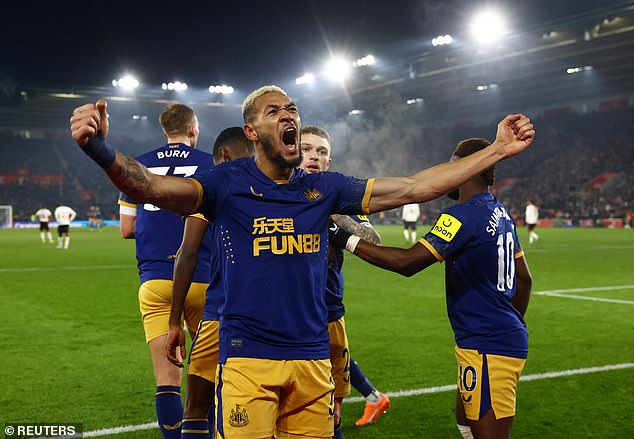 And it was Newcastle who had been the better team in the opening 45 minutes.. Howe prickled at the weekend when it was put to him that some of his players looked tired. Tired, he felt, was such opinion. He responded by naming the same XI from the previous three matches and they started like the trains on which their 3,000 followers had sped from the opposite end of the country earlier in the day.

For all of that early dominance, they did not score, and after one goal in their last four league games, questions have been asked as to the sharpness of forwards Callum Wilson and Miguel Almiron. Just don’t call it tiredness.

There was one passage that captured their recent stall in front of goal, both players hesitating rather than pulling the trigger as the ball bounced around the penalty area in the 12th minute. Joe Willock did get a couple of shots away but was left wishing he hadn’t, so wild were his finishes. 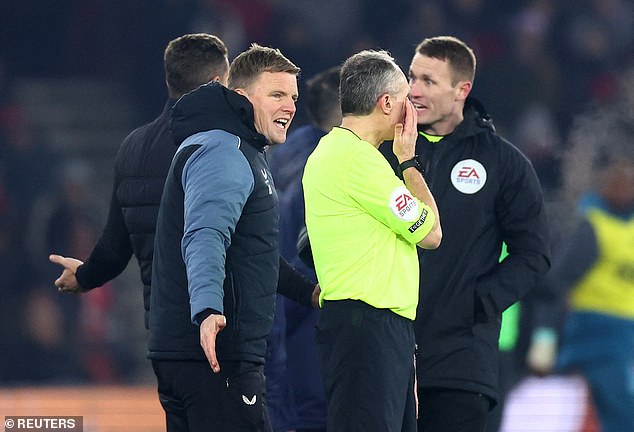 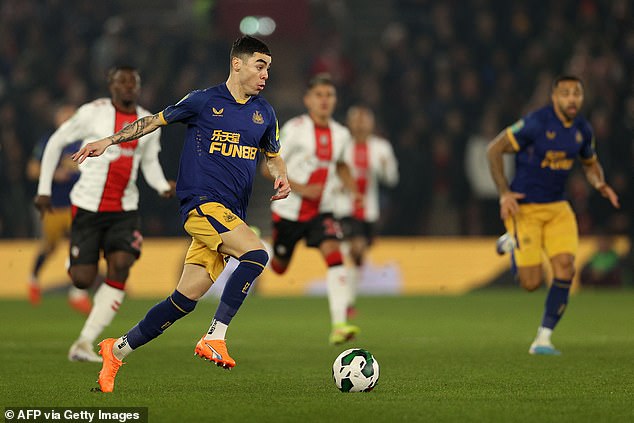 Newcastle did have the ball in the net when Joelinton turned in from close range on 39 minutes. Stuart Attwell immediately blew for a handball by the Brazilian and, with no clear evidence to the contrary, VAR stuck with the referee’s decision. That was the right call, even if Attwell’s was perhaps wrong.

Joelinton should have bypassed the need for any Stockley Park review when Almiron’s cross was deflected to his unmarked feet, just six yards out, shortly after half-time. With a gaping target all he had to do was find it. Instead, he found a way to miss, spooning way over the crossbar.

But he made no mistake in the 73rd minute as substitute Alexander Isak burned by Duje Caleta-Car and centred for his team-mate to bury without hesitation.

There was a nervy moment for the visitors when Armstrong then bundled in from close range but replays clearly showed a handball. And, in the closing moments, home defender Duje Caleta-Car was sent off when picking up a second yellow card for a chop on Allan Saint-Maximin.