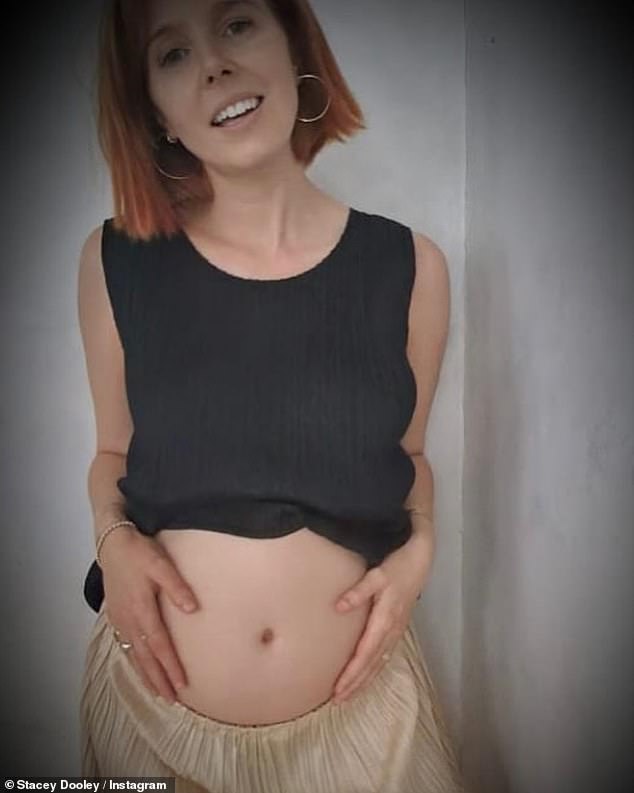 Stacey Dooley is pregnant with her first child.

The TV presenter, 35, revealed she and ex Strictly dancer Kevin Clifton, 39, are expecting as she showed off a picture of her growing bump on Instagram on Friday.

She wrote: ‘Gaaaaaaang… We are having a baby! So bloody delighted. Kev, you’re magic, I love youuuu.

Stacey Dooley is pregnant: TV presenter, 35, revealed she is expecting her first child with Kevin Clifton, 39, as she shared a bump photo on Instagram on Friday 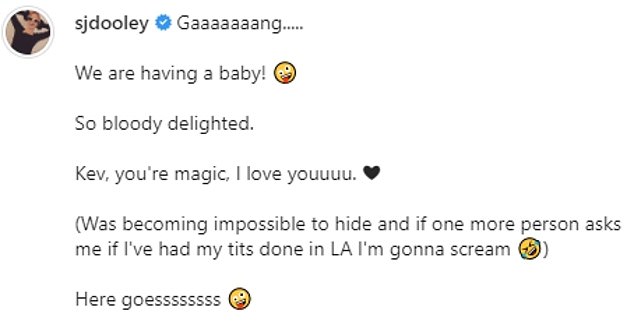 Baby news! Kevin also shared the same picture at the same time and sweetly wrote: ‘We’re having a baby! ❤️❤️❤️ And I think my girl @staceydooley looks beautiful pregnant’

‘(Was becoming impossible to hide and if one more person asks me if I’ve had my tits done in LA I’m gonna scream). Here goessssssss.’

Kevin also shared the same picture at the same time and sweetly wrote: ‘We’re having a baby! ❤️❤️❤️ And I think my girl @staceydooley looks beautiful pregnant.

Her long-term boyfriend Kevin was the first to react in the comments section, gushing back to his girlfriend: ‘Love you.’ 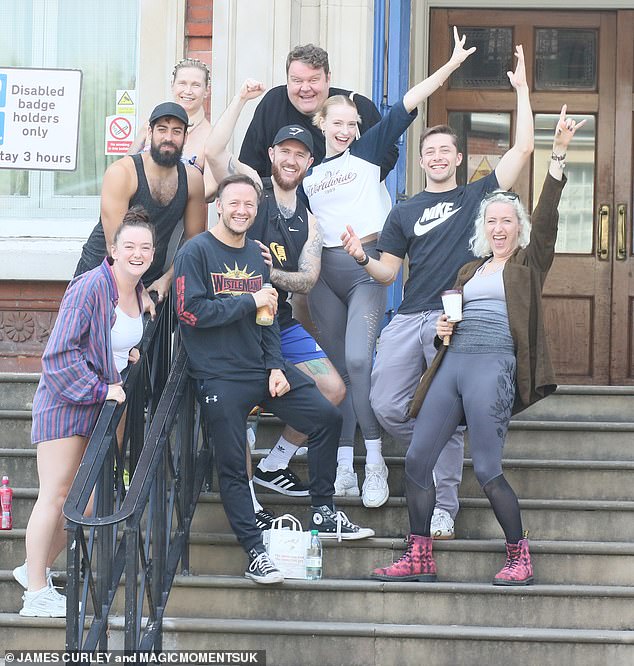 Surprise! The presenter is expecting her first child with her boyfriend Kevin Clifton, who was seen celebrating the news while rehearsing with his Strictly Ballroom co-stars on Friday

Looking good: Stacey hid her bump behind a black top as she left the TV studios in Manchester on Wednesday 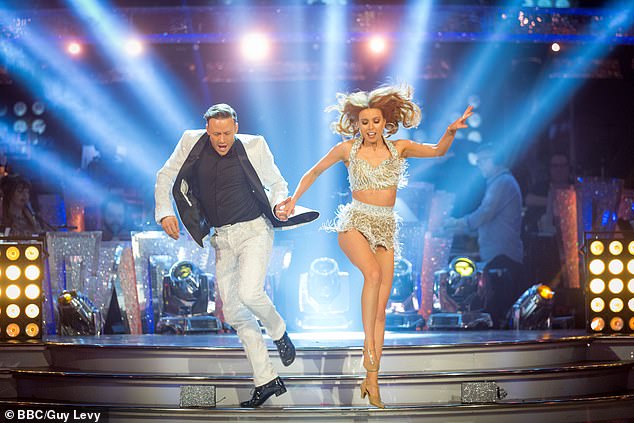 Love: Kevin and Stacey were crowned Strictly champions in 2018 after winning viewers’ hearts with their incredible partnership.

Thrilled fans and celebrity pals were quick to congratulate the couple in the comment section.

Laura Whitmore penned: ‘So delighted for you guys!! Congrats’ 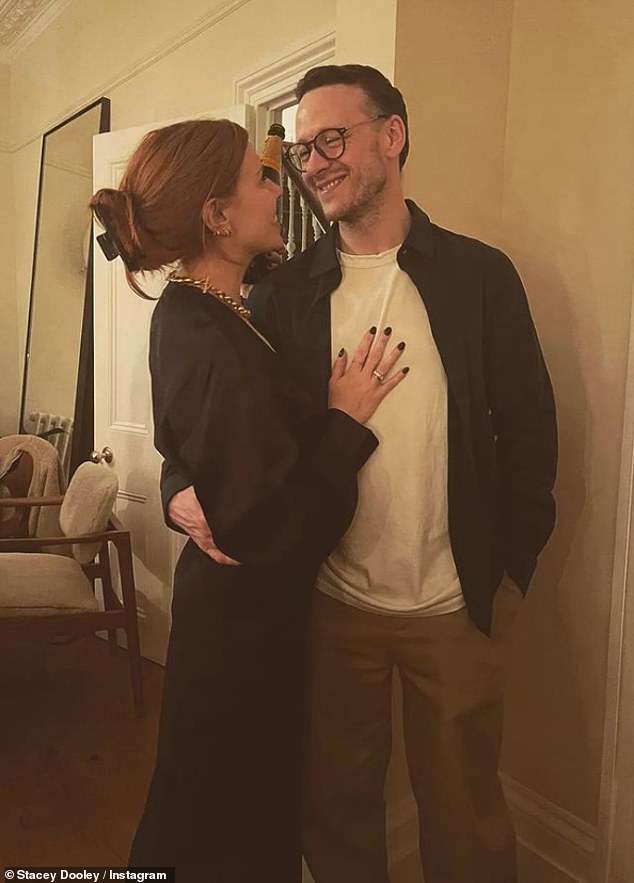 Romance: Her long-term boyfriend Kevin was the first to react in the comments section, gushing back to his girlfriend: ‘Love you.’

Happy news: Thrilled fans and celebrity pals were quick to congratulate the couple in the comment section

In December, the couple sparked engagement after Stacey sported a band on her ring finger in an Instagram post.

The pair were seen eating dinner, sharing a plate of dessert which had the word ‘Congratulations’ piped in chocolate

Stacey previously revealed she had gone through a crisis about being childless at 35 after filming for her new documentary earlier this year.

She was forced to dig deep during her 10-day stay with the Sisters of St Hilda’s Priory Order of the Holy Paraclete in Whitby, North Yorkshire for her new show.

She told The Sun how the experience – which saw her living alongside the nuns – made her prioritise her life at home with Kevin. 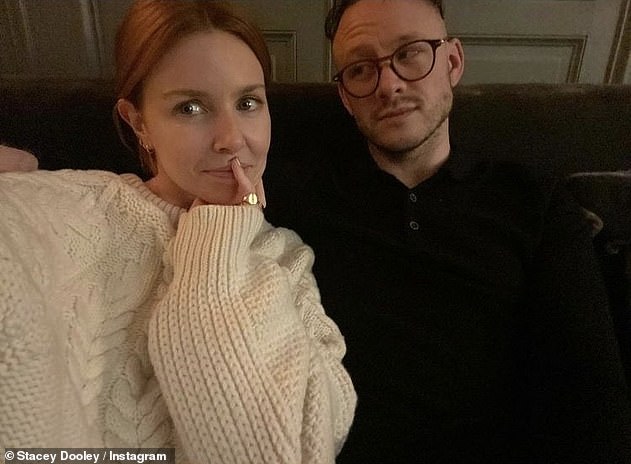 Loved up: Stacey hinted at wedding bells with Kevin Clifton, 39, after showcasing a band on her engagement finger back in December 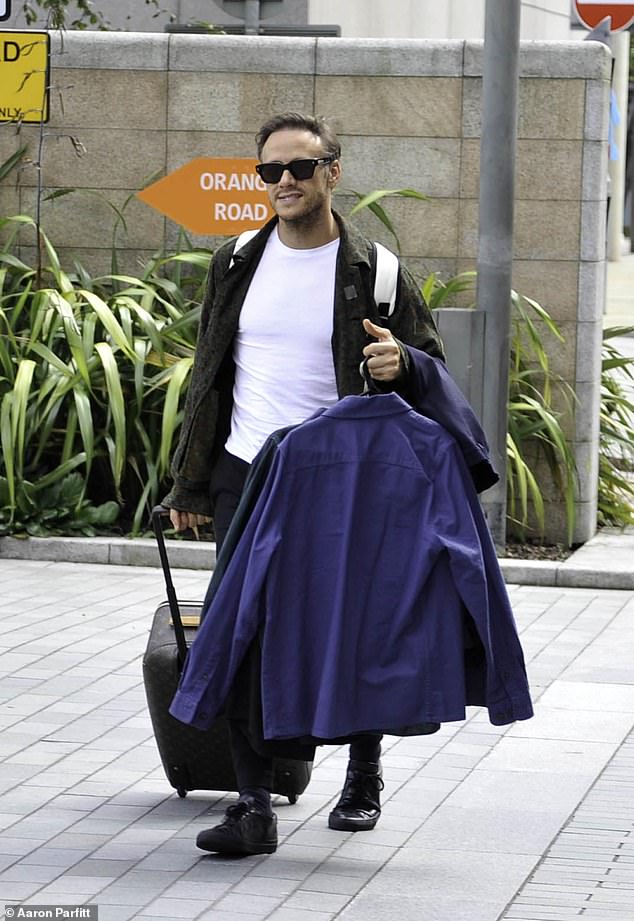 Outing: Kevin followed closely behind his girlfriend after a day of filming her new documentary

Kevin and Stacey were crowned Strictly champions in 2018 after winning viewers’ hearts with their incredible partnership.

Months later, in 2019, it was revealed the pair with dating, after Stacey split from her long-term boyfriend Sam Tucknott.

Sam then confronted Kevin about his relationship with Stacey in a furious FaceTime call. 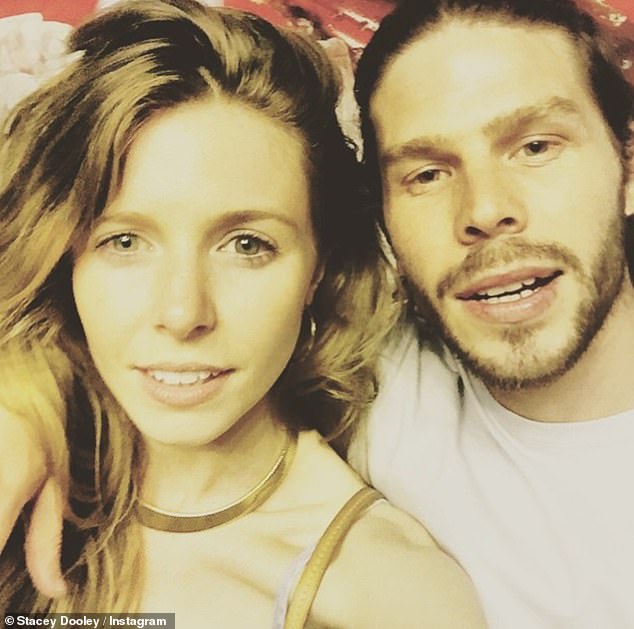 Ex: Stacey pictured with her former boyfriend Sam Tucknott who she split with in 2019

The personal trainer claimed he called Kevin a ‘snake’ and a ‘rat’ when he discovered flirty text messages sent to his ex after they separated.

He told the Mail on Sunday: ‘He went white. I just stuck it on him, ‘You’re an absolute rat. How you conducted yourself. Just a slippery, slimy snake.’ He didn’t say a word. He looked petrified. He looked so shocked.’

‘I am so respectful of [Stacey], but I am gutted and I am disappointed and I feel so let down that she did not have the respect for me to tell me and just come clean.’

Meanwhile Stacey is heading back to the ballroom as she creates a new documentary for BBC.

The TV personality, who is known for creating documentaries, has gone back to the Blackpool ballroom to produce the Ballroom Dance Festival show.

Stacey, who lifted the Glitterball trophy in 2018 on the popular BBC dance competition, said she ‘was hooked’ the minute she got involved with ballroom.

The documentary will give BBC viewers remarkable insight into the real-life tears and triumphs of the hopefuls competing for the British Open Champion title.

Coaches and trainers will reveal all the behind the scenes that the dance has to offer as Stacey’s company Little Dooley will produce the dazzling show.

Stacey said: ‘The minute I was introduced to the extraordinary world of ballroom, and Latin I was hooked!

‘The culture, the passion, the dedication, the anecdotes, the sequins…! We are hoping to deliver an insightful, thrilling look into an iconic scene that has until now, felt relatively undiscovered. And I really can’t wait!’ 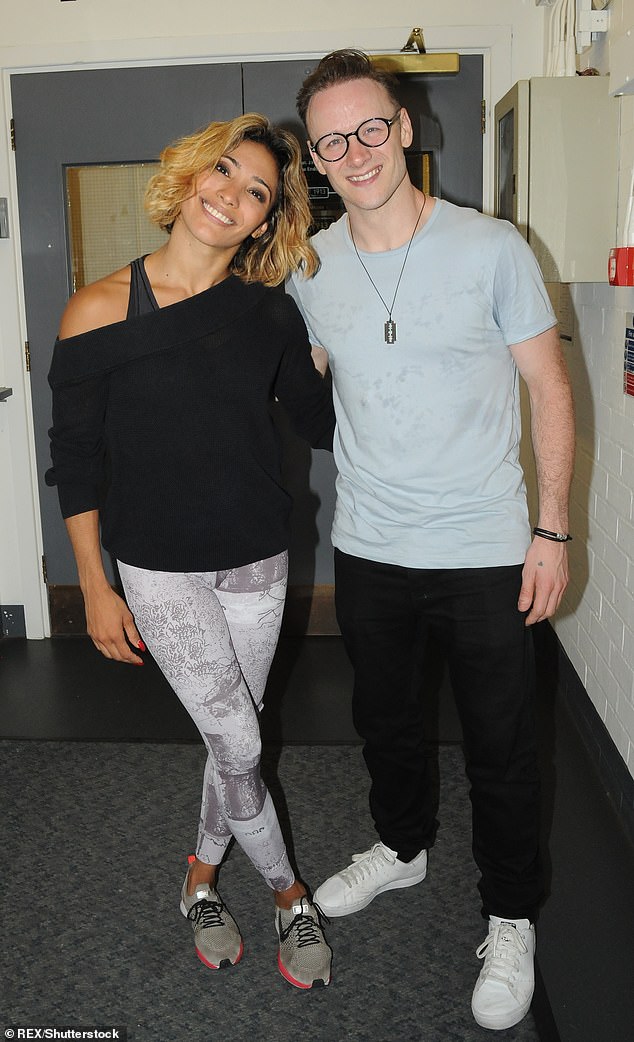 Happier times: Kevin was married to his fellow Strictly pro, Karen Clifton, 39, for three years before they split in 2018 (pictured in July 2018) 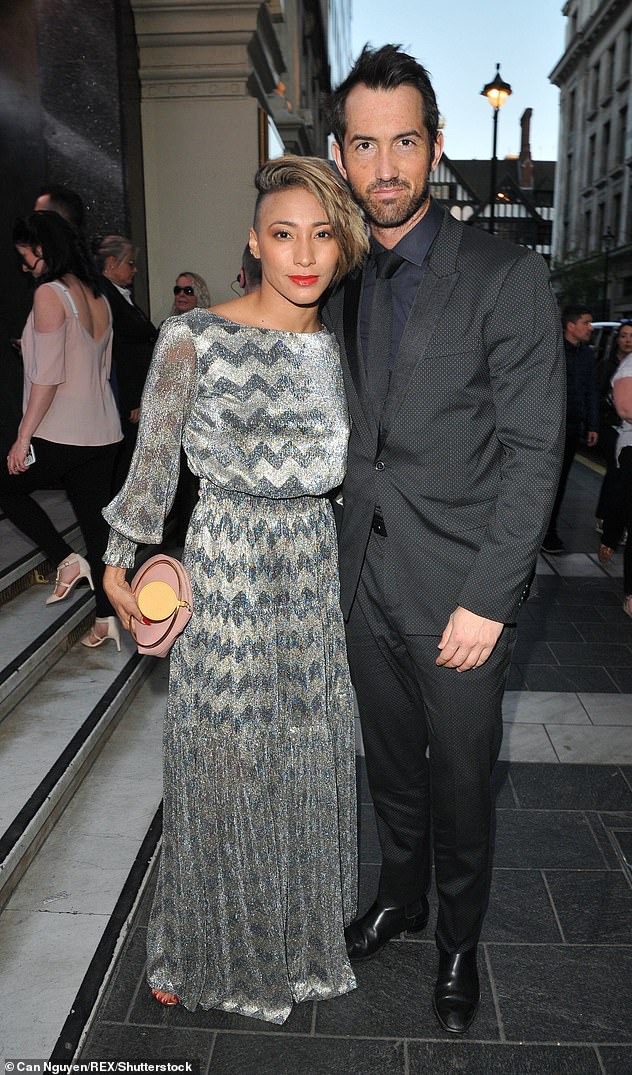 Over: Karen went on to date opera singer David Webb (pictured in April 2019), but they have sadly split 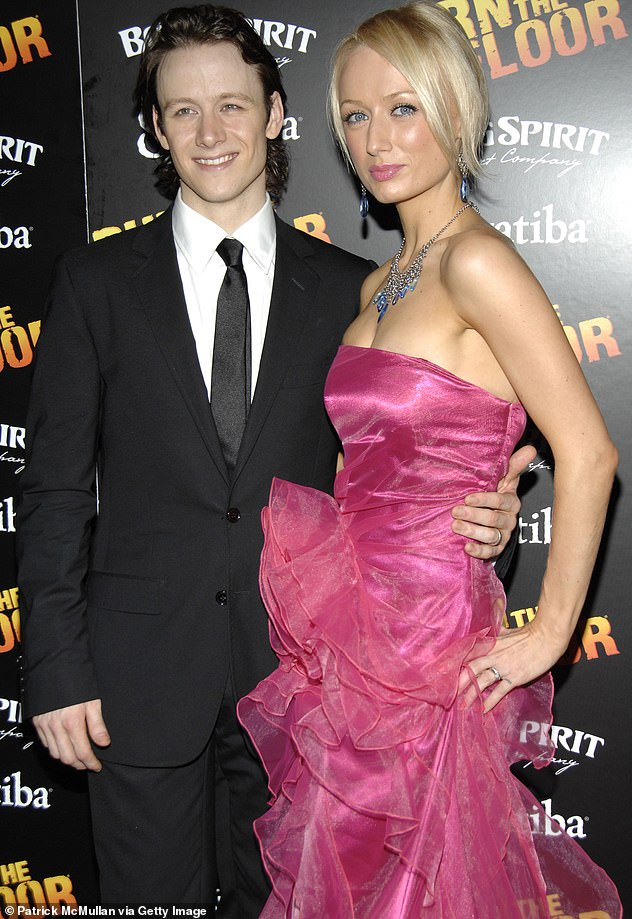 Past love: Meanwhile, Kevin was previously married to Clare Craze from 2007 after meeting two years before in a salsa bar. They split in 2010 (pictured in 2009)