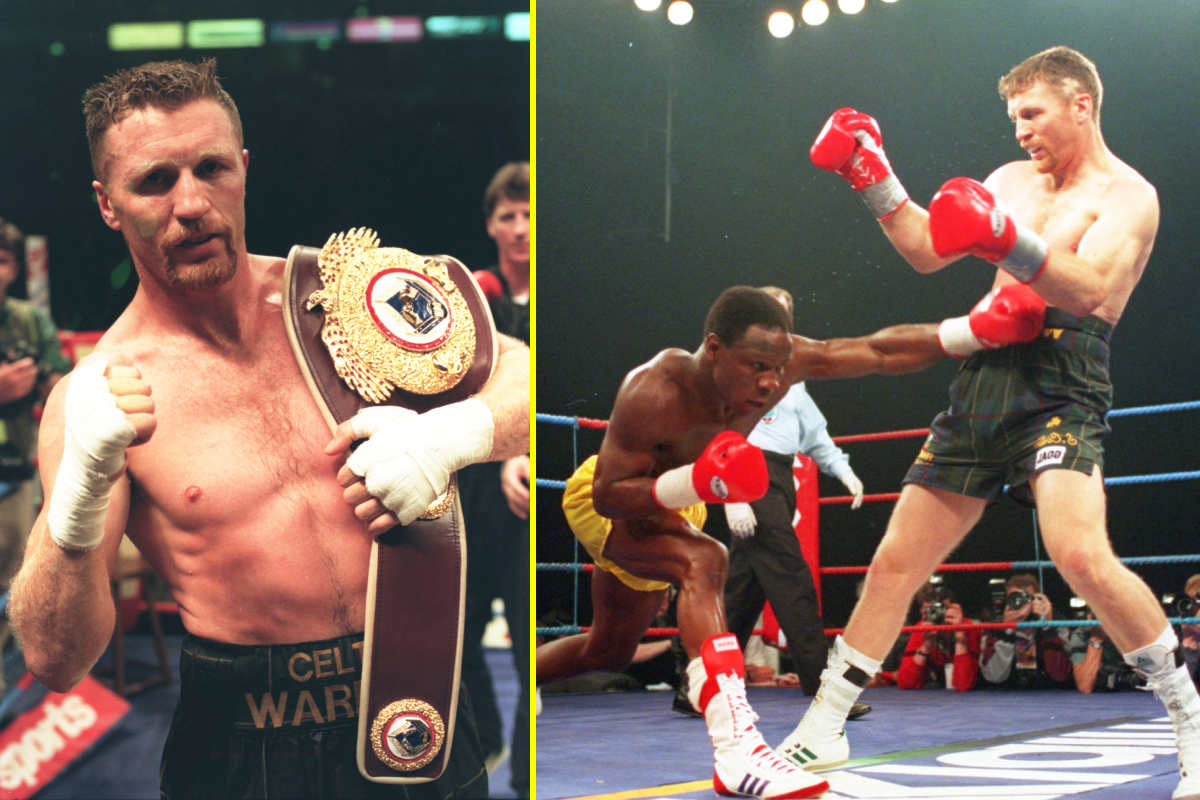 “It was like a movie,” Steve Collins recalls of his first victory over Chris Eubank, “Everything about it.”

“St Patrick’s Day,” he continued, to talkSPORT, “There were over 3,000 people at the weigh-in, which never happened – they should have charged £1 a head. They would have made a fortune.

“The St Patrick’s parade leading to the weigh-in – the whole razzmatazz. The whole mind games.”

The mind games, particularly, were essential in that victory in March 1995, when Eubank remained undefeated and his reputation was such that he was perhaps even the highest-profile fight figure in the UK.

Ireland’s Collins had moved to the UK from the US, where he had been working with none other than the Petronelli brothers Goody and Pat, in his attempts to pursue the lucrative fights with Eubank and Nigel Benn that he believed he could win.

The reputation of Benn, the intimidating “Dark Destroyer”, had remained largely unaffected by losing and then drawing with Eubank, his great rival, in 1990 and then 1993. That he had stopped America’s even more feared Gerald McClellan – doing so a month before the first fight between Eubank and Collins – had perhaps even left his stock at an all-time high.

If Benn’s reputation was enhanced by the victory over McClellan, so, too, was Eubank’s. Where Benn ensured intensity, Eubank relished being the showman, and did so in the knowledge that not only was he boosting his own psyche, but that he would increasingly get under his opponents’ skin.

The then-30-year-old Collins, in a significantly more subtle way, was capable of matching Benn’s intensity, but it wasn’t until his rematch with Eubank, later in 1995, that he sought to show it. Instead, aware that even around St Patrick’s Day, Eubank could be expected to remain and relish being the centre of attention, he sought to stop his opponent being the star of his own show.

By then trained by the late Freddie King, Collins – whose remarkable tenacity made it inevitable he would respect Eubank’s toughness and fearless edge – visited hypnotist Tony Quinn in his attempts to be persuaded that, come fight night, he wouldn’t feel pain. On the eve of their fight, he even told Eubank that that was what he had done – that not only had he been trained to not feel pain, but that he wouldn’t tire – and the eccentric Eubank was so unnerved that he asked their promoter Barry Hearn if the 14th defence of his WBO super-middleweight title could be called off.

“I am going into unknown territory,” Eubank, then 28, said on the day of the fight at Green Glens Arena in Millstreet, Ireland. “In the 43 fights I’ve had in the past I’ve always known what I was dealing with. I don’t know what I’m dealing with. I’m fighting someone who is mechanically oriented and that is just an unknown area. I shouldn’t be in that ring. This is wrong. This is legal cheating.”

Collins, regardless, recalls feeling plenty of pain. He also recalls ignoring Eubank’s grandiose ring entrance atop a 1975 Harley Davidson Shovelhead and drowning out his entrance music while sat in the corner with his head bowed beneath a tartan hood and headphones from which he was listening to music from Rocky.

He put Eubank down in the eighth – Eubank’s punch resistance was among his greatest strengths – and recovered from a knockdown in the 10th to win via two scores of 114-112 and another of 117-113 from the three ringside judges. In his first fight at 168lbs, after establishing himself at middleweight he had won a world title at a second weight.

Collins’ first defence was an immediate rematch that September, at Pairc Ui Chaoimh in Cork. Aware the then-studious Eubank would have learned from their first fight, he reinvented himself, this time preparing to overwhelm Eubank – so often effective at dictating the pace of his fights, and who had since stopped both Bruno Ruben Godoy and Jose Ignacio Barruetabena inside a round – with aggression. In the moments before the opening bell he can be seen repeatedly hitting his fists together; the second it rang he sprinted to the centre of the ring to throw a left hand. He won via split decision – two scores of 115-113, against another of 114-115.

In retirement Collins and the volatile Benn have become friends, but their first fight, at the Manchester Arena in July 1996 – when Benn, 32, was considered in decline, having unexpectedly sacrificed the WBC super-middleweight title to Thulani Malinga, and when Collins was in his prime – came years after Collins had first targeted him.

Collins has since spoken of being ‘scared’ of Benn’s power, and more significantly of how an explosive left hook Benn landed in their first fight proved decisive in their rivalry. Just able to absorb Benn’s finest shot, there was a moment in the ring where they made eye contact and Collins believes they both knew that he had just resisted the best Benn could offer – and which had taken so many other opponents off of their feet. The Celtic Warrior was narrowly leading and growing in confidence in the fourth when Benn slipped and injured his right ankle so badly he later turned his back while trading with Collins, forcing the intervention of the referee.

Their rematch followed at the same venue that November. Collins’ relentlessness forced Benn to again fight at a high pace and to respond by attempting to trade, but even against Benn the Irishman rarely seemed hurt. A bruising career had, by then, eroded the fighter Benn once was, and at the end of the sixth round he retired – not just from that fight but from the ring.

“I’d put them both on the same level, but yet different,” Collins added. “If Nigel Benn had Chris Eubank’s durability – if Chris Eubank had Nigel Benn’s power – they would have been unstoppable, unbeatable fighters.”