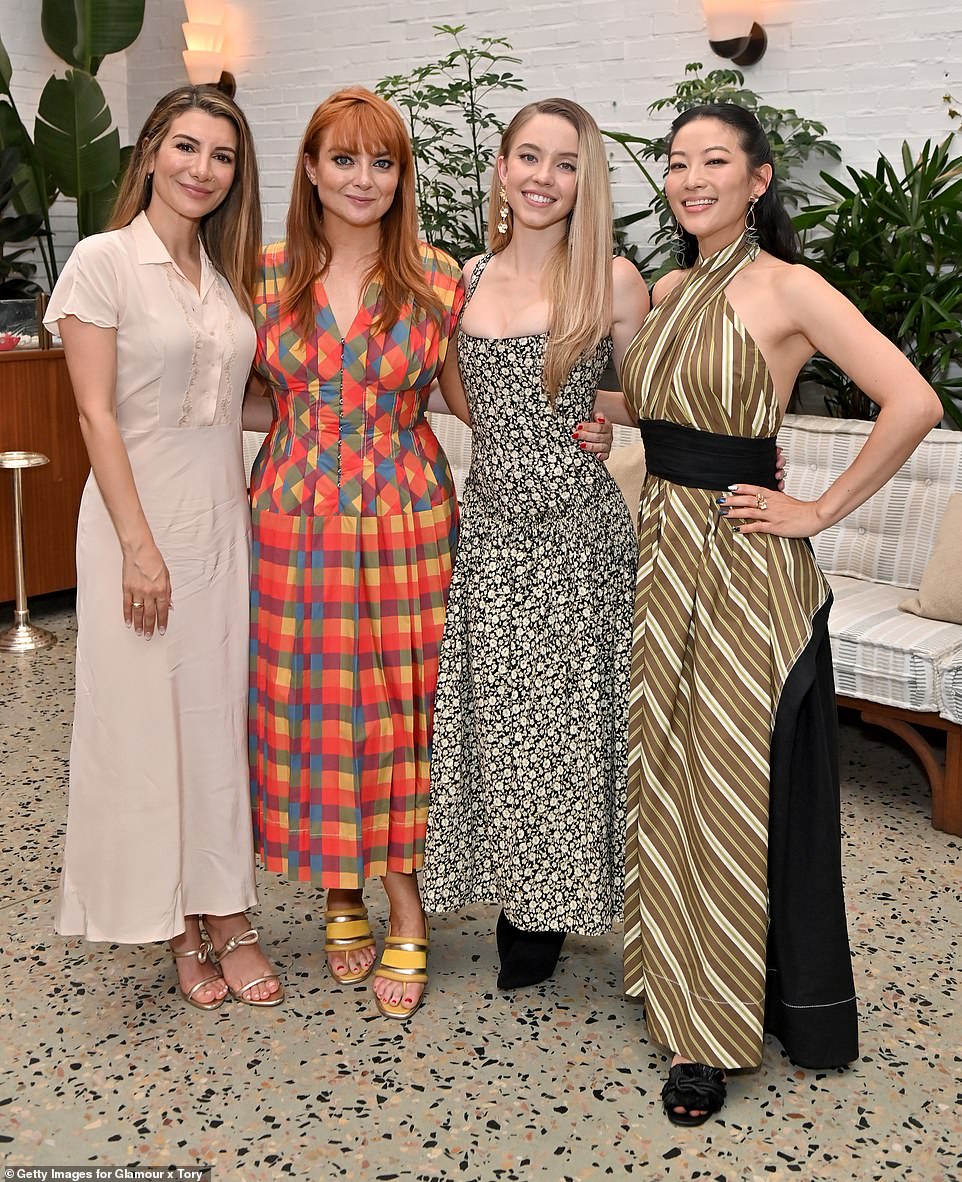 Sydney Sweeney showed off her classic and elegant side as she attended the special Glamour x Tory Burch Luncheon earlier on Saturday in West Hollywood.

The Euphoria star, 24, donned a long, floral dress as she posed for photos once she arrived at the event which took place at the social club, Holloway House.

Other celebrities were invited to celebrate the upcoming Emmys, including Issa Rae, 37, who donned chic pants while Rachel Brosnahan, 32, showcased a vibrant skirt.

Sydney slipped into a long, flowy dress with thin straps that comprised of a black and cream-colored floral pattern.

The gown fell down towards her ankles, showcasing a pair of fashionable, black boots to complete the look.

The talented actress was pictured holding a black Tory Burch shoulder bag in her hand as she posed for a few snaps when she arrived at the star-studded luncheon in Hollywood.

To accessorize her look, the beauty added a pair of gold-colored, dangly floral earrings to bring her outfit together.

Her blonde hair was parted to the side, allowing her long locks to fall down straight past her shoulders, with the ends slightly curled.

Celebration: The Euphoria star was pictured for a group photo with other talented celebrities such as Nasim Pedrad, Samantha Barry, and Arden Cho

Issa was one of the other stars at the glamorous event. She donned a pair of sleek, brown pants which were secured with a belt of the same color at the waist. The Lovebirds actress added a dark brown-colored crop top with the pants.

To complete her look, Issa threw on a colorful, long-sleeved jacket and slung a yellow, small Eleanor bag from Tory Burch that is priced around $648, according to the brand’s website.

For an additional touch of color to her look, she slipped into a pair of bluish-colored, open-toed heels. 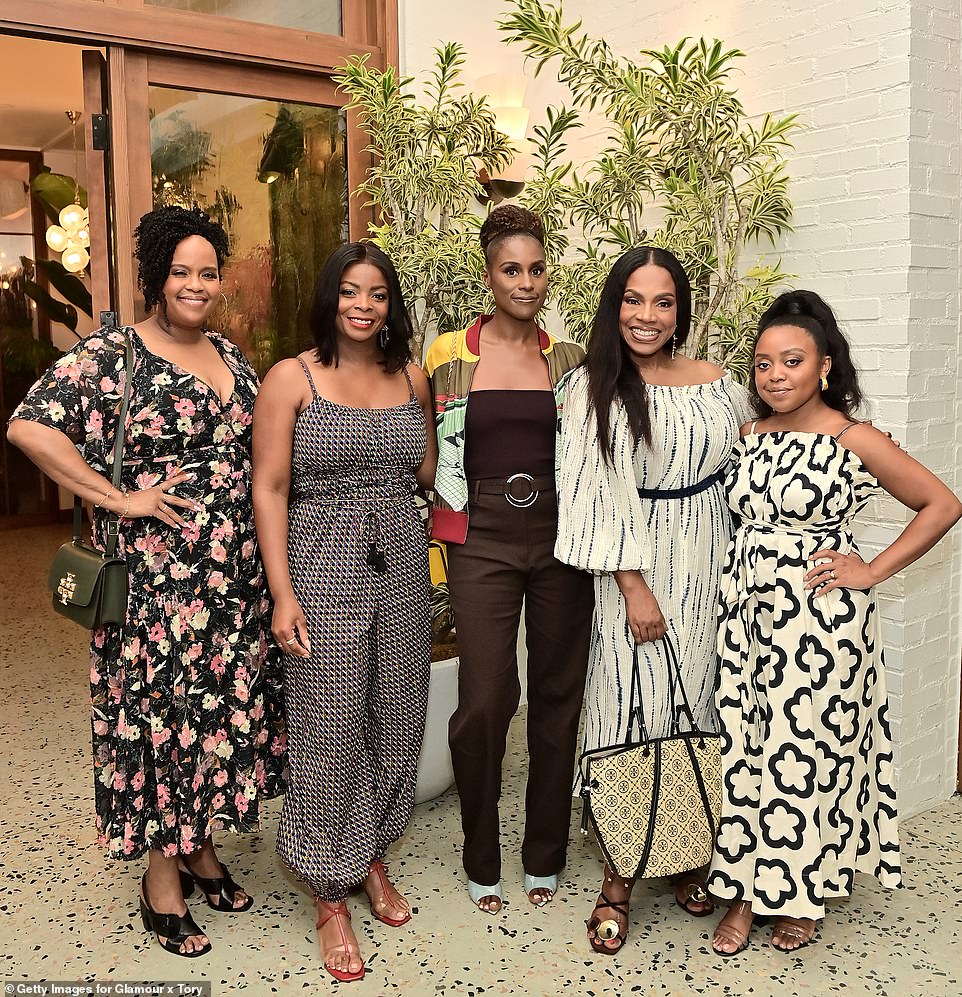 Rachel opted for an edgy look, and is known for her role as Miriam Maisel in the hit Amazon series, The Marvelous Mrs. Maisel.

She opted for a vibrant, reddish-colored skirt with a slit on the left side, along with a black cropped top with a pink floral design on the front.

Her brunette hair was styled up into two buns at the top of her head. The star held a black, rectangular-shaped purse in her right hand as she posed for photos.

Rachel is nominated for an Emmy Award for Lead Actress in a Comedy Series, along with Issa for her role in Insecure. 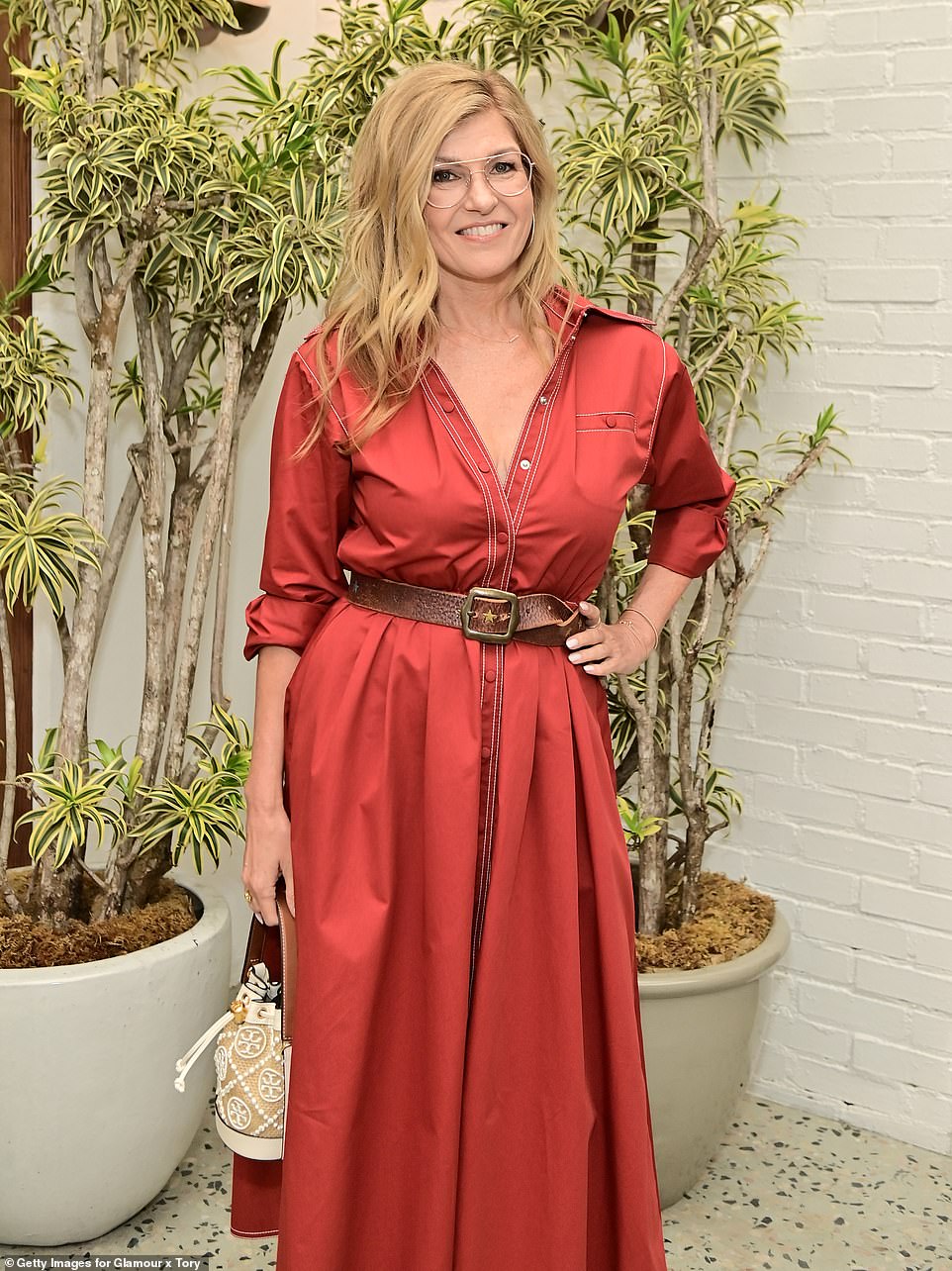 Gorgeous: Connie Britton also was in attendance at the event and posed for a few photos at the Holloway House 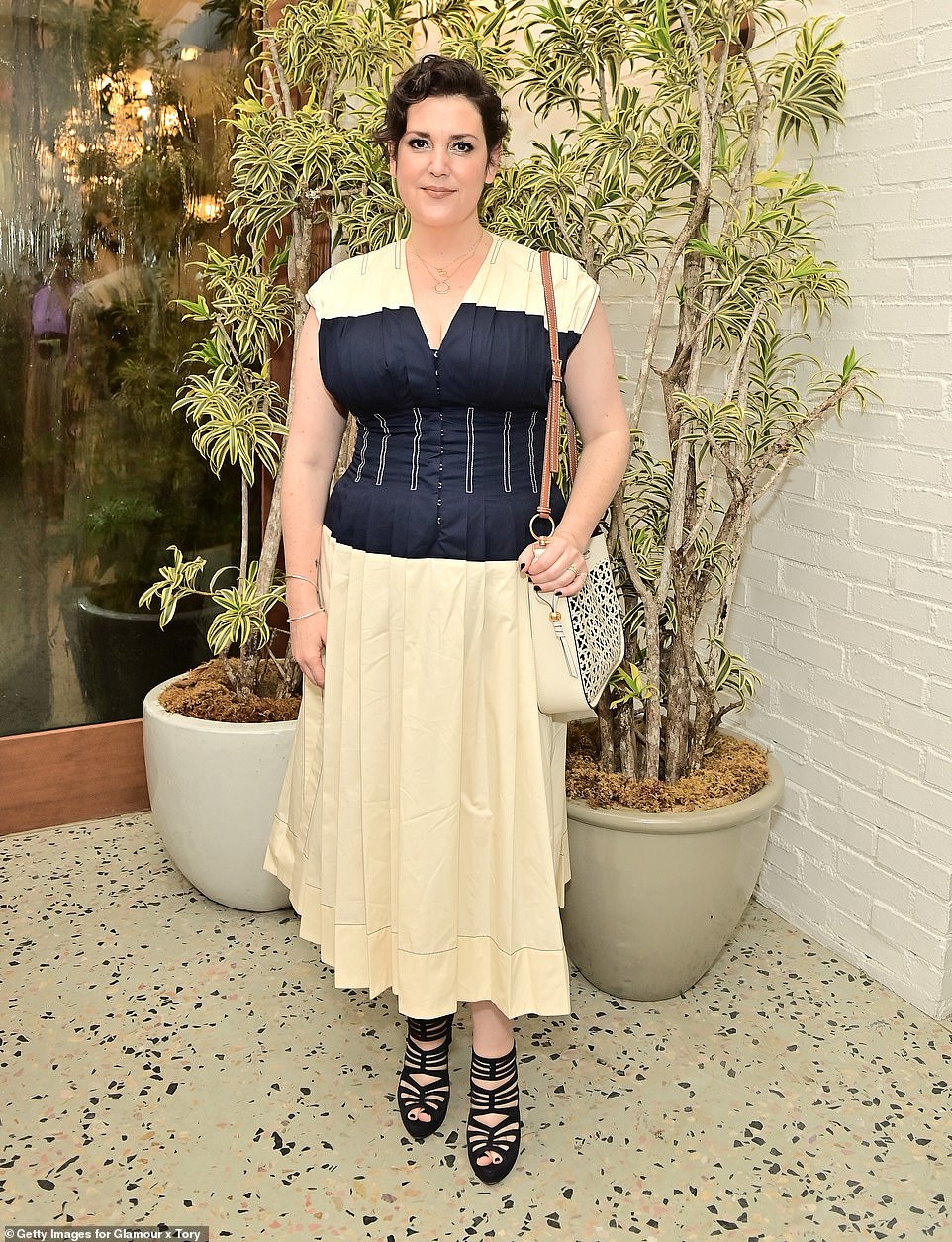 Connie Britton arrived at the event wearing a red, cotton Eleanor dress from Tory Burch, which is priced at $598.

The American Horror Story alum opted to leave a few of the buttons open at the top of the dress. A bucket bag from the luxury brand was held in her right hand as she paused for some snaps.

Melanie Lynskey wore a Cotton Poplin Claire McCardell dress in blue and cream, which is priced at $898.

The Candy actress slipped into a pair of black, cutout heels to add an stylish edge to the look.

Connie has an Emmy nomination for The White Lotus, while Melanie is nominated for Yellowjackets.

Elegant: Both Sheryl Lee Ralph and Nasim Pedrad turned heads in elegant dresses at the luncheon

Sheryl Lee Ralph, who has a Supporting Actress nomination for her role in Abbott Elementary, chose to wear a cotton dress with puffed sleeves.

The summer dress was tied at the waist with a black, chord fabric to showcase her fit physique.

The actress carried a Tory Burch Spaghetti Strap Raffia Tote bag which can be purchased at $898.

Saturday Night Live comedian and star, Nasim Pedrad, donned a short-sleeved, cream-colored dress that fell down towards her ankles.

She held a gold clutch bag in her hand and slipped into a pair of gold, strappy heels.

The 74th Emmy Awards are set to air on NBC on September 12, and the star-studded awards show will be hosted by comedian, Kenan Thompson.