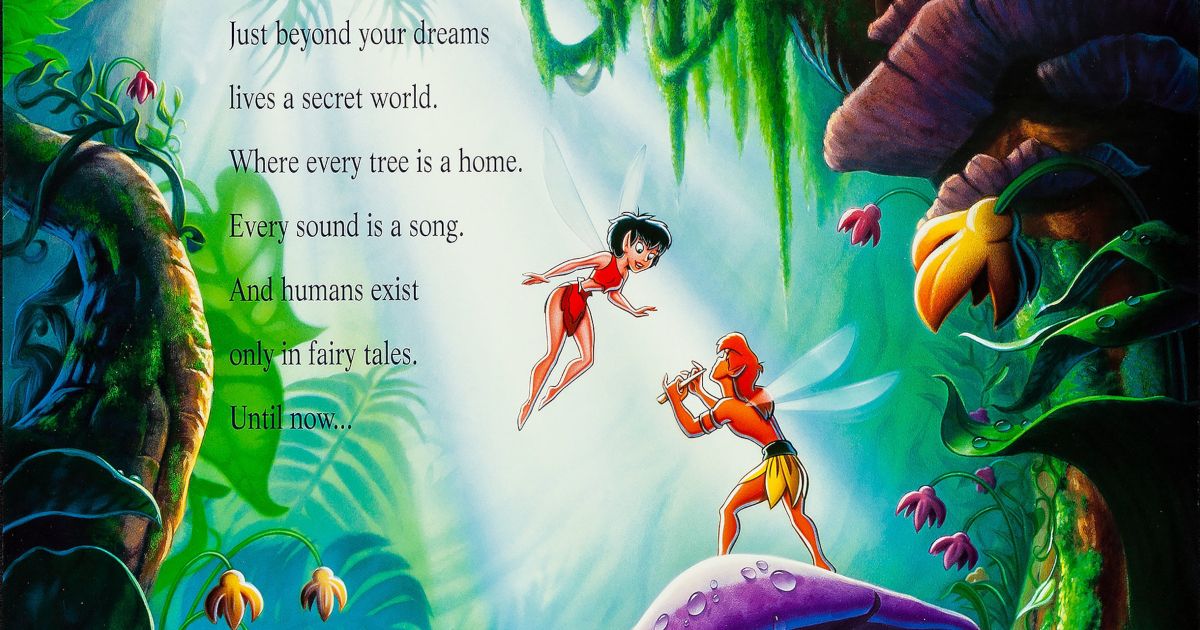 The ’90s was an incredible decade for animated movies. It was also Disney’s best decade for animated films, and so there was a lot to compete with. So it’s definitely saying something that a small movie from an underdog studio could become a childhood touchstone for millennials the way that FernGully: The Last Rainforest did. Just about every kid in the 90s either owned the VHS of this movie, or had watched it at a friend’s house. The beautiful animation, stellar cast, and heartwarming environmental story was part of what shaped that generation of children, tying together the feeling of magic with the unique beauty of rainforests. Overshadowed by such an incredible decade of animation, it is still one of those ’90s movies that didn’t get enough love.

FernGully was a passion project of then-married couple Diana Young, who wrote the children’s stories about the fictional Australian rainforest, and producer Wayne Young, when they were both living in the surf paradise Byron Bay, Australia. It took them years of working out the concept and looking for possible interest, before the success of The Little Mermaid in 1989 sparked new interest in animation, and opened the path forward for FernGully to be made.

The story follows Zak, a human logger who is marking trees to be chopped down, until he’s shrank down to human size by magic and comes face to face with fairies and the animal inhabitants of the magical forest he is helping to destroy. Most of the fairies don’t trust him, and believed humans to be a myth. But Crysta, the young rebellious fairy, trusts him and teaches him about the subtle magic and exquisite beauty of the life around them, until he begins to see that it is worth saving. Together with the other fairies and their animal friends, they fight to stop Hexxus, the demonic smoke entity that is the embodiment of pollution and toxicity.

There are many things that came together to make this film so memorable and impactful on children in the early ’90s. The animation is gorgeous, the voice acting is superb, and the message is heartfelt, driven by a genuine passion for the environment and the preservation of rainforests. These things together are why FernGully remains a strong presence in the modern zeitgeist, used today as a hashtag to reference pristine areas of natural beauty, or as a reference to talk about environmental causes or news stories.

FernGully is, first and foremost, a visually beautiful film. It takes place in an Australian rainforest. Featuring fairies and other fantasy elements, it might have been easy for the animators to create fictional animals and plants. But all of the flora and fauna featured in the film are real.

It was hard for Wayne Young to find an animation studio for the project. Disney dominated the market, and employed many of the best animators in the business. Young eventually partnered with Kroyer Films, a small company who hadn’t done a feature film before. But Kroyer, like everyone else on the project, was passionate about the work. He even insisted that the animators take tours of the rainforest in Australia that inspired the story, saying in an interview with Vanity Fair:

“The pitch was that the real rain forest is so magical itself, that’s the thing you want to portray, to convey that it’s worth saving. We didn’t draw fantasy plants or animals – we saw these things. …We went over there with a thin story, but everything came together when we saw the glowing fungi.”

This makes the environmental message of the movie all the better, considering the care and attention the animators gave to their real-life surroundings.

Young and director Bill Kroyer ended up bringing a few of Disney’s animators over to their side, too, including the fantastically talented Kathy Zielinski, who was the supervising animator of The Little Mermaid’s Ursula. “We had to keep Kathy in a box,” Young said in the Vanity Fair interview, regarding her animation of the villain Hexxus, “or she would’ve scared the hell out of the parents, too.”

It wasn’t just the animation that was beautiful. The score was done by the incredible Alan Silvestri (Forrest Gump, Back to the Future), with some songs featuring famous artists such as Jimmy Buffett (who wrote the lyrics for the villain’s song “Toxic Love”), and Elton John.

An Impressive and Dedicated Cast and Crew

One of the main things that really brought this movie together was the cast and crew. Everyone from the director to the actors and animators cared about the film, with many of them working for lower pay in support of the environmental cause. Some of the profits would later even be donated to environmental organizations.

The movie had an all-star cast, too, with Robin Williams, Tim Curry, Christian Slater, and Samantha Mathis all giving excellent performances. Even Cheech and Chong, the iconic weed-smoking duo, reunited for this movie. Williams was particularly notable for many reasons – this was his first animation role, and he was pressured by Disney to give up the role as Batty, a bat who escaped from an animal testing facility, because of his later project voicing the genie in Aladdin, which was being produced that same year. He refused, citing the importance of the message of the film. Batty as a character was even created for Williams, by screenwriter Jim Cox, who loved Williams’ standup. Originally, Batty was only set to have a few minutes of screen time, but Williams reportedly recorded over 14 hours of material, prompting the producers to adjust the movie to give him a much larger part. It is easily perhaps the best part of the movie, showing Williams’ natural ease with voice acting, as well as his warm humor and endearing character he gives to the role.

It would be remiss not to mention Curry’s wonderful performance as the villain Hexxus. Curry would say in the above Vanity Fair article that he liked that it was a small studio, working on a passion project, and that it’s always fun to play a villain.

Related: Robin Williams Fans Are Mourning His Death 8 Years Later: ‘I’m Still Not Over It’

A Passion Project about the Environment

There are a lot of great movies about the environment. But FernGully was one of the earliest, coming out around when saving the environment was becoming a trendy topic. With celebrities like Madonna and Tom Cruise making it a public issue, it became easier for a movie like FernGully to be produced. Young wanted his wife’s work to translate into a strong environmental message, but he didn’t want it to be too strong. “We have gone to a lot of trouble to avoid preaching,” Young said. “We also want it to be viewed as entertainment.”

And that blend between a strong message and an entertaining animated movie balanced well, entertaining children as well as motivating them to love the environment and care about it. The movie even goes into animal experimentation with the character of Batty, who escapes a facility, but not without some brain damage, and a radio-receiving device attached to his brain.

At the end of the movie, Crysta defeats the pollution monster Hexxus with a magical seed. And while that is fairly on the nose in terms of the environment, it planted a seed in the minds of children that has grown into a generation that is passionate about the environment, and wants to save rainforests.