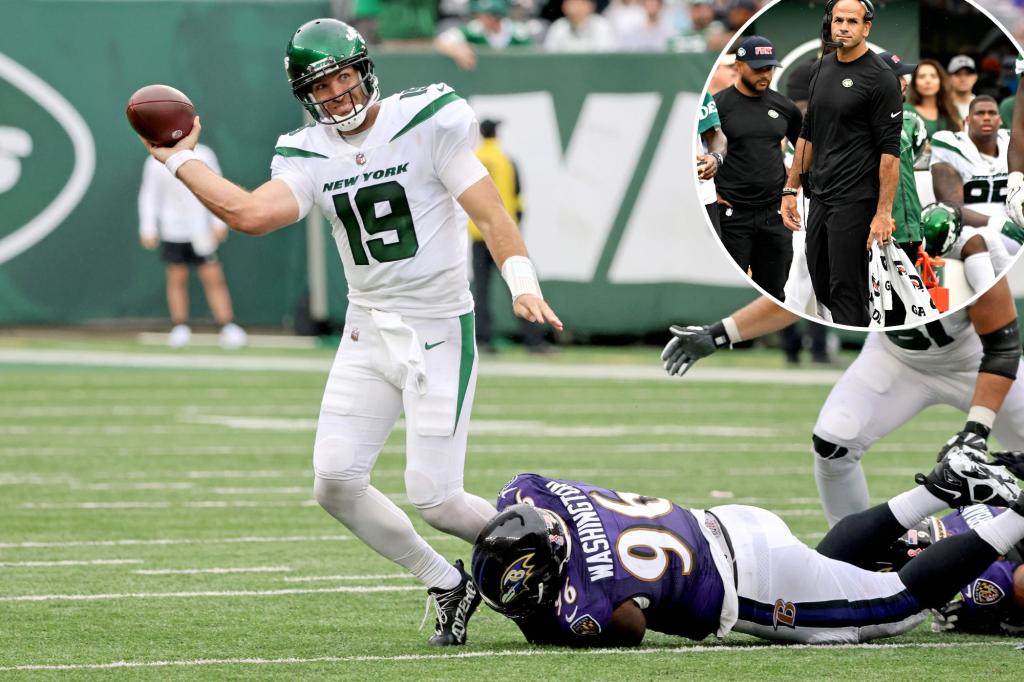 The Jets opened the season with a thud on Sunday, falling 24-9 to the Ravens to begin the year 0-1 for the fourth straight season. Here are some thoughts and observations from the game:

1. It has gotten so tiring to listen to Jets teams after losses like this explain things away. If this happened … it would be better. If we didn’t give up long passes, the game is close. If we don’t turn the ball over, things would be different. These things are true, but guess what? You did make those mistakes. There are going to be 16 teams this week (maybe 17 with the tie between the Colts and Texans) who will explain away why they did not win. Every team that loses in the NFL can point to two or three things that did not go well and that is why they lost.

It is year after year with the Jets talking about “self-inflicted wounds” or “we shot ourselves in the foot.” The day I don’t hear those phrases anymore in their postgame locker room is the day I know this team has actually turned the corner.

Sunday’s game had the familiar feel from recent years. They hung tough for a while but it never felt like they were going to win the game and eventually the better team took over.

The other thing I’m tired of hearing from the Jets is how this is not the same team it has been. Prove it. Stop talking about how good you can be and … be good. You can go through the revolving cast of characters that have been with the Jets in the last seven years who have told everyone that this team is better than their performance. Enough. It is time to prove it.

And when I say prove it, I don’t mean they have to win every game. But they have to be competitive. The offense has to have a pulse. There have been too many games like Sunday’s around here. No one expects the 2022 Jets to go to the Super Bowl and they should not expect them to go to the playoffs. But they should be able to be in the game in the fourth quarter and not down 21 points.

2. Now that I have that off my chest, I will give the Jets the benefit of a little bit of perspective we don’t have yet. The tricky part of evaluating Week 1 games is we have no idea how good anyone is. Are the Ravens a 12-win team, a nine-win team, a seven-win team? We don’t know and therefore don’t have total perspective on Sunday’s game.

I did not think the Ravens played particularly well but they do have a very good quarterback, who made big plays when the team needed him to come through.

We’ll see what happens with Baltimore, but we could look back at Sunday’s game and say of course the Jets got dominated by the Ravens because they are one of the best teams in the league and the Jets were playing with their backup quarterback.

3. The usage of rookie receiver Garrett Wilson was interesting to me. It took a while for the Jets to put Wilson into the game and then a few plays after he entered the game he had an impact play where he caught a short pass along the sideline, made several Ravens miss and almost picked up a first down. Then, he disappeared.

Why take him out of the game when it is clear he can make plays? That tells me the Jets coaches do not trust him yet. Wilson only played six snaps in the first half. He ended up playing 41, but that was because the Jets largely went to four wide receivers in the second half when they were trailing.

Here’s the thing: Wilson probably needs more time to learn the offense and the details of being a professional receiver, but he can make things happen with the ball in his hands and the Jets don’t have enough of those guys.

I think if you are the Jets coaches you have to play Wilson and live with the growing pains. If he makes a few mistakes, but then breaks one for a long play, you can live with that. He is a playmaker. Play him.

4. The offensive line has been a concern for the last month and those fears looked valid on Sunday. This group simply has not had enough time to work together. Left tackle George Fant has been bounced back and forth from left to right and back to left. Left guard Laken Tomlinson just came to the Jets in March as a free agent. Right guard Alijah Vera-Tucker moved from left guard to right guard. Right tackle Max Mitchell is a rookie fourth-round pick who the Jets never thought would have to play, never mind start, this season. Mitchell is basically their third-string tackle with the Mekhi Becton and Duane Brown injuries forcing him into the lineup.

The line should get better, but they need time together and they need receivers to get open so Flacco or whoever is playing quarterback can get the ball out quickly.

QB Joe Flacco had 59 passing attempts. That is not a winning formula for the Jets. He is the eight player in Jets history to attempt at least 59 passes.

TE C.J. Uzomah only played 23 out 84 snaps (27 percent) while fellow TE Tyler Conklin played 77 snaps. Uzomah was a big free-agent pickup by the Jets. Why use him so little?

CB D.J. Reed played a nice game. He did not give up any receptions and had an interception. He revealed to CBS after the game that he ran to midfield after the pick to pay tribute to his deceased father.