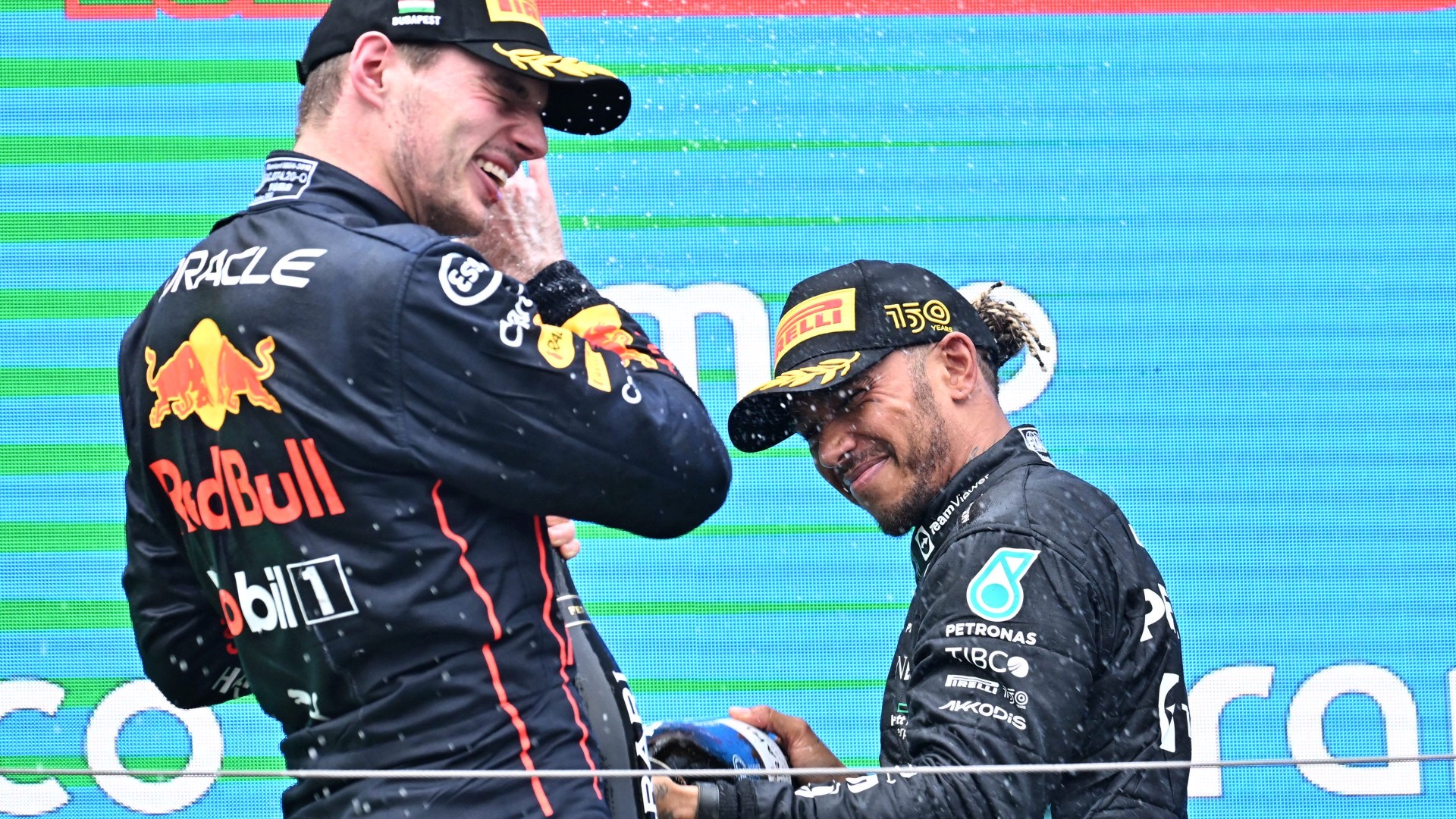 The Formula 1 season recommences this weekend as the grid heads to Spa for the Belgian Grand Prix.

Verstappen holds a commanding 80-point lead in the driver standings after back-to-back victories before the three-week summer break.

The Red Bull star is heavy favourite to defend his world championship with no driver in history surrendering such a large points margin.

Leclerc remains the closest challenger to his title, but the two most recent races in France and Hungary saw both Mercedes drivers finish on the podium.

Lewis Hamilton and George Russell are now benefiting from their team’s improvements after a poor start to the season – and Verstappen has welcomed the Silver Arrows’ return.

“It’s good that they are competitive because then they can steal more points off Ferrari!” said Verstappen.

Russell memorably secured Williams’ first front row start since 2017 during qualifying and will be itching to return to Belgium in a more competitive Mercedes.

The race weekend at the Circuit de Spa-Francorchamps is scheduled forFriday, August 26to

There will be two practices on Friday that will start from 1pm UK time with the third session an hour earlier at noon on the Saturday.

Qualifying will take place at 3pm while the race itself will get underway at 2pm UK time on the Sunday.

Coverage will again be on Sky Sports F1 throughout the weekend. Their coverage of Sunday’s race build-up begins at 12:30am.

Sky Sports customers can live stream this via the app using their mobile, tablet or computer devices.

If not, you can purchase a Sky Sports Day Pass from NowTV for £9.99 while Channel Four will broadcast highlights later in the evening.

talkSPORT will have all of the best of the action throughout the week.

Verstappen put in a stunning performance in qualifying, clocking the fastest time and being a remarkable 0.632 seconds clear of the field.

But he will start from 15th after being hit with a grid penalty for using too many engine parts.

Ferrari’s Carlos Sainz will start on pole with Sergio Perez second and Lewis Hamilton in sixth.

Belgian Grand Prix: What has been said?

“I never called Sergio, he’s a good guy and I respect him, but I never talked to him and I was not in contact with any other driver.

“Lewis and I, even in the face of a not-so-encouraging scenario like the beginning of this season, we are always aligned in wanting to try to make things better and to be together next year.

“And we’ve been telling each other for a couple of months that we could go on, maybe five or 10 years, right? So none of that is true.”

However, Hamilton wouldn’t be drawn talk of retirement: “I still feel fresh and still feel like I’ve got plenty of fuel left in the tank.

“So, I’m enjoying what I’m doing. I’m… really, really proud and enjoying arriving every day and working with this incredible group of people. I’m also enjoying working with the sport more than ever.”

“The names are there, with every cockpit,” Schumacher told Sky Germany.

“Mick [Schumacher, Ralf’s nephew] has also not yet signed a contract. Therefore, he would be a candidate. A candidate with speed, as you have seen.

“Nico Hulkenberg is also still in the starting blocks. And then there is the question of Daniel Ricciardo.

“Personally, I can’t imagine that he would get another chance in Formula 1.”