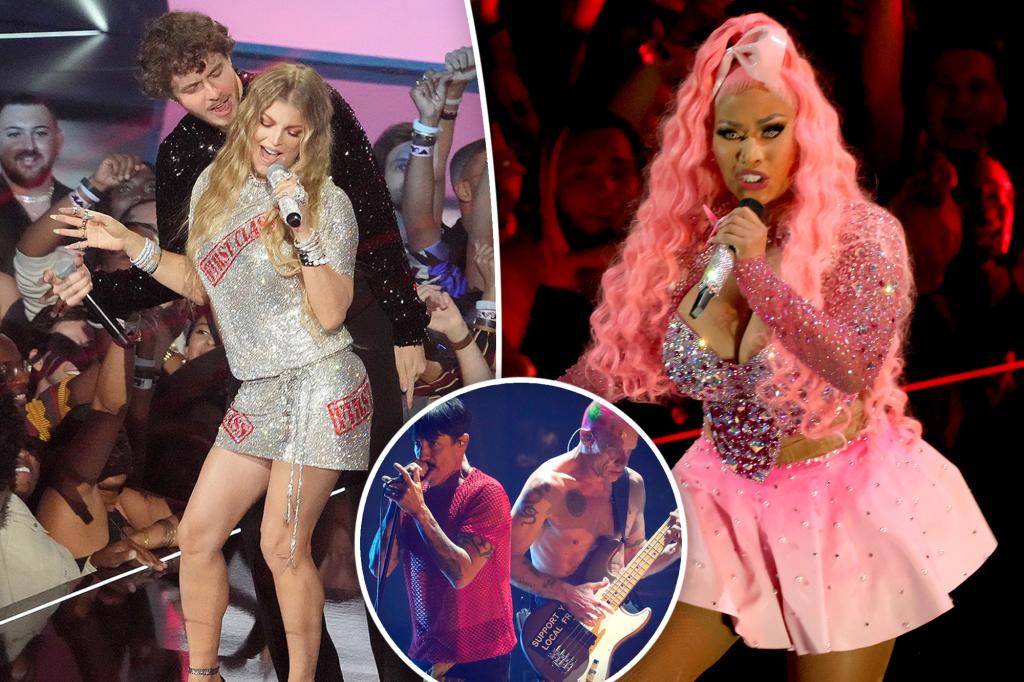 Perhaps the best performance at this year’s MTV Video Music Awards — held for the second time at the Prudential Center on Sunday night — didn’t even take place on the VMAs stage. That was when Artist of the Year winner Bad Bunny had the audience hopping from his show at Yankee Stadium, whether they were concertgoers or viewers watching the awards all around the world.

But it was also a night that big winner Jack Harlow, who took home four VMAs, and Video Vanguard recipient Nicki Minaj were better at performing than they were at co-hosting. Meanwhile, Global Icon Award honorees Red Hot Chili Peppers led a rock resurgence that also featured Panic! At the Disco and Italian breakout band Maneskin.

Before MTV goes back to forgetting about music for another year, we look back on the best and worst performances of the 2022 VMAs.

Doing “Pink Venom” — from their upcoming second album “Born Pink,” due Sept. 16 — the K-pop girl group underwhelmed in their debut performance on a US awards show. It was bad enough that many in the audience — both in the Prudential Center and around the country watching — probably didn’t know the song, but the stiff, lifeless performance failed to establish the group as a live force to be reckoned with on the VMAs stage.

Co-host Jack Harlow gets props for bring back Fergie from the musical oblivion — where exactly has she been? — after he generously sampled her 2007 hit “Glamorous” on his 2022 No. 1 hit “First Class.” Respect was due, and he gave it to a star much in need of some love. And then when you added Lizzo to the opening on “2 B Loved (Am I Ready),” well, we already know that Lizzo makes everything better.

It took almost an hour for co-host Nicki Minaj to show up to the VMAs stage. But when she did, the 39-year-old Queens MC made a show-stopping statement that proved why she — haters be damned — was worthy of this year’s Video Vanguard Award. A pink-haired Minaj owned the candy-coated set to the delight of her legion of Barbies in a medley that veered from her killer verse on Kanye West’s “Monster” to solo hits “Beez in the Trap,” “Moment 4 Life,” “Super Bass” and “Anaconda” that showcased her range of styles and flows. At the end of a mini-set that proved why she is one of the best female rappers of all time, she was even to be excused for some obvious lip-syncing during her current No. 1 hit “Super Freaky Girl.”

After seeing Em and Snoop rocking the Super Bowl halftime stage in February in real effing life, the whole metaverse performance of their new single “From the D 2 the LBC” was a major letdown. I mean, who wants virtual versions of these two rap legends — especially when the flesh-and-blood icons are actually in the house? The whole thing felt like a gimmicky, desperate attempt to make these aging rappers look relevant. But at least they redeemed themselves a bit at the end by appearing and performing all the way live.

The Chili Peppers got a humorous introduction from Cheech and Chong before they gave their Global Icon Award performance. But once the band took the stage, it was serious business as they put the M — music — back into MTV and the VMAs. From the moment they launched into their 2022 hit “Black Summer,” there was no doubt that the Chili Peppers were performing completely live. Imagine that? The pure joy of seeing badass bassist Flea and guitar god John Frusciante jamming together on stage almost made you think that you were watching the Grammys for a second. And the boundless energy that the Chili Peppers displayed — 22 years after they already won MTV’s Video Vanguard Award — as they returned to their rap-rock roots on “Can’t Stop” made you wonder just how many of this year’s acts would still be rocking the VMAs stage 38 years after their debut. I’m betting exactly none.

First Kane Brown became the first male country star to ever perform at the VMAs in a rousing performance of “Grand” from the Toyoya Stage that made Fort Lee, NJ look like Nashville. Then Puerto Rican sensation Bad Bunny one-upped him with a remote performance from Yankee Stadium on his second of two nights that were the hottest ticket in town. It had already been a big night for Latin artists, including performances by Anitta, and J Balvin and Ryan Castro. But a satin-suited Bad Bunny was the hottest of them all, delivering the kind of electric performance that beat just about any other one of the night. You could really feel the energy of the crowd rocking and rapping along with the reggaeton superstar to “Titi Me Pregunto.” And it was fitting that he was able to receive his Artist of the Year award — beating out Styles, who failed to do a remote performance from his own show at Madison Square Garden — in front of his adoring fans.