‘We don’t deserve you,’ Jimin fans get emotional after his touching thank you gesture as Permission To Dance tops Billboard Hot 100 — read tweets 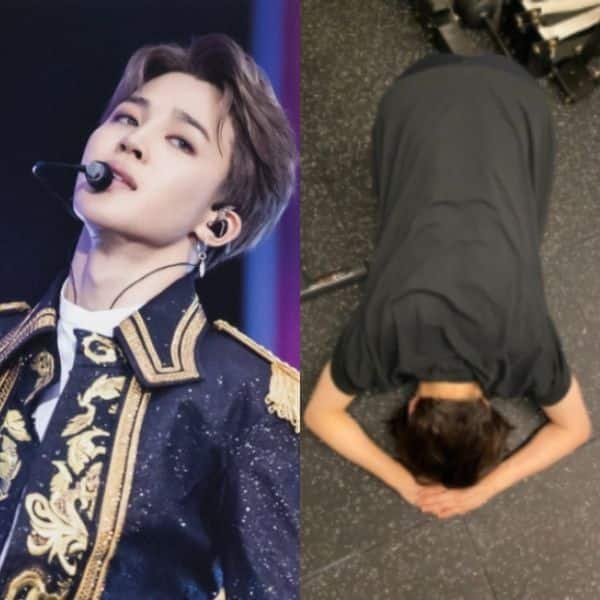 BTS has created history. After Butter enjoyed a seven weeks run on the Billboard Hot 100, it is Permission To Dance that has taken the spot. This is an unprecedented record for any band. The septet are visibly moved seeing how much love has been showered on their efforts. RM, Suga, Jin, Jimin and J-Hope thanked fans for everything. While RM wrote a long note on how he was filled with mixed emotions as he was unable to see ARMY for a long time. He said he just wanted to close his eyes and enjoy the feeling. He wrote, “I would like if one day we can embrace each other and share with each other the joy we couldn’t share! Thank you with all of my heart.” Also Read – BTS: ARMY passes the baton from Butter to Permission To Dance; tops Billboard Hot 100 and here’s how RM, Suga, Jimin, Ed Sheeran REACTED

But it is Jimin’s gesture that has moved fans all over. He wrote that he is still in a state of disbelief. Then, he posted a picture of him doing the full bow before the ARMY. In Korean culture, it is the sign of showing ultimate respect and appreciation. Jimin’s gesture left fans teary-eyed. He also wrote that he would continue to live hard, and requested fans to be happy, at least for them. Jimin reportedly trended with over a million tweets. More than the number, Jimin fans are super emotional seeing the depth of his emotions. Just check out the tweets… Also Read – Trending Hollywood news today: BTS talks about a concert in India; Marc Anthony’s reaction to Jennifer Lopez-Ben Affleck’s relationship and more

You were allways the first one to comfort me , your still the one I think I m so lovely . You deserve each and every happiness cause ur the happiness of each and every army . I love you so much.#JiminWeLoveYou @BTS_twt

Let’s give this whole universe to JIMIN#JiminWeLoveYou

in asian cultures bowing the way jimin did is showing the utmost sign of respect to someone. like as someone who has the same values i was so shock to see jimin do that and i’m extremely touched. i truly stan the right people ? pic.twitter.com/LgWEyXRdjh

Dear Jimin you are a great human being. We love you thankyou so much for your love and respect for the Army. You are a pure soul please don’t do this,we are the people who should bow to you for your music and comfort??? #BowToJimin #jiminyouareperfect #JiminWeLoveYou

I…. I really don’t deserve him. I genuinely don’t think I’m enough to deserve this amount of respect and gratitude. Jimin, I should be the one giving a big bow to you right now, you really have done so much for me. #Jimin #JiminWeLoveYou @BTS_twt pic.twitter.com/uyva6OOwPH

He’s such a good hearted person.The deep bow shows so much respect for us fans.I was so touched (and will be) in the first moment and couldn’t hold back my tears ?#JiminWeLoveYou #Jiminie #BTS#PermissiontoDance #BTSARMY @BTS_twt pic.twitter.com/QeMbJnqSNp

We can see that fans are moved. Yesterday, Indian BTS Army had an emotional moment when RM replied to an Indian fan who dedicated the song Hamdard from Ek Villain for him. Also Read – BTS’ Suga reveals about the DREAM the septet had when they made their debut and it’s proof of their simplicity and humbleness

Pediatricians group recommends all children over 2 wear masks at school

Louis Vuitton Is Getting Into Gaming