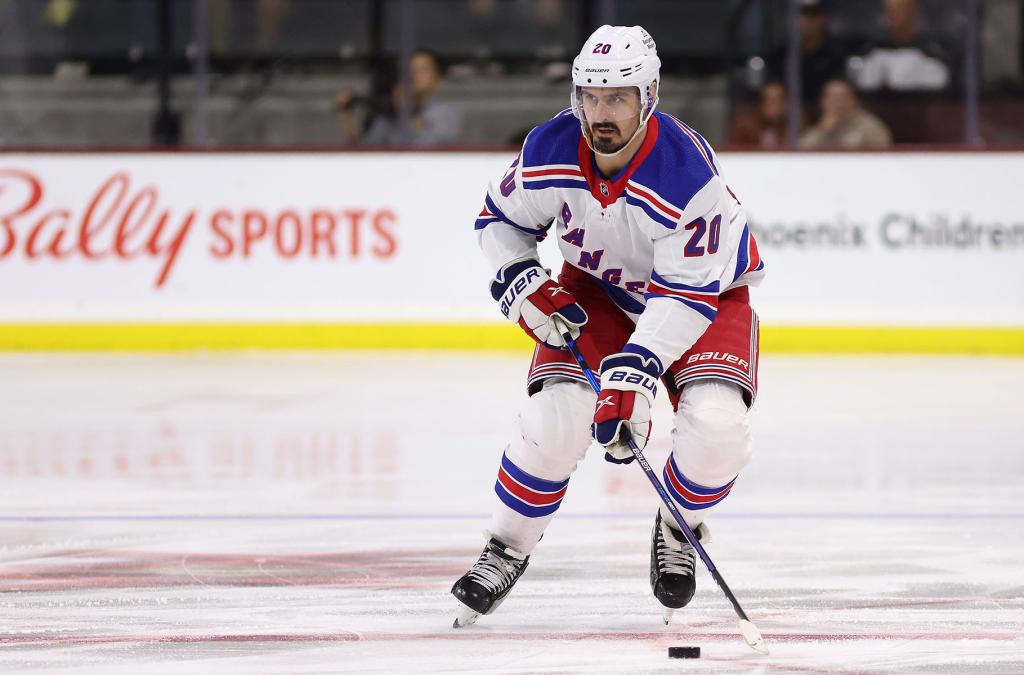 Chris Kreider’s reawakening represented one of the most important developments of the weekend. I mean, seriously, Did. You. See. Chris’. Pass????

It is not so much about whether the practitioner of Moneyball can approach 50 (or 52) goals again. But, as always, it is about Kreider skating and getting in on the forecheck; about making life difficult for opposing defensemen; about being a visible factor on the ice even if he is not showing up on the scoresheet.

He sure was visible over the weekend. He was moving his feet. He was in on the puck. He was tough to handle. And he was rewarded for his effort, breaking a six-game goal-scoring drought in Dallas on Saturday by being the right spot to bang home a rebound for his third goal of the season and first at five-on-five.

Then, on Sunday in Tempe, playing in a college atmosphere on a college campus that might have brought No. 20 back a decade to his days on Chestnut Hill for BC, there was that brilliant touch deflection of a pass that set up Mika Zibanejad for the power-play game-winner with 7:04 remaining in the third period.

Read the expert take on the Blueshirts

Sign up for Larry Brooks’ Inside the Rangers, a weekly Sports+ exclusive.

True, the deflections and put-backs that went in last season largely have not this time around. But Kreider’s chance rate and high-danger chance rate have been through the roof, regardless of which analytical database is referenced. And there are 72 games to go…72 games in which the Rangers need No. 20 to be a force in more areas than when playing net-front. The weekend was a good start.

All work and no play makes Igor a better netminder

Before the weekend, I had suggested on Twitter that I wouldn’t rule out starting Igor Shesterkin in back-to-back games for only the second time in his career and for the first time since February of his rookie 2019-20 season.

My thinking was that not only did the Rangers need to get on a roll after losing four straight (0-2-2) for the first time since the end of 2020-21, but they needed to get Shesterkin on a roll, as well.

The mission seemed to be accomplished on both fronts, though challenges lay ahead with visits from the 5-2-1 Flyers on Tuesday and the 8-1-0 Bruins on Thursday. A roll generally is defined by more than two games.

More pucks have been going through Shesterkin through the first weeks of the season. And though the defensive work has not always been pristine, he has hardly been under siege.

Shesterkin has been good, at times very good, but has not played to even an approximation of last season’s level. We’ve talked about this. The Rangers’ goaltender carries an outsized burden, just as Henrik Lundqvist did for a dozen years. If the club gets even B-plus goaltending, they are probably sunk. They got B-plus in Dallas, when the Blueshirts were able to take advantage of relief netminder Scott Wedgewood, who replaced Vezina contender Jake Oettinger (lower body) with the score 2-2 just over six minutes into the second period.

But they got an A effort in the desert on Sunday night as Shesterkin made acrobatic saves to preserve what was a tie game in the second period and then locked down the victory in the third period. His save percentage for the night was only .900 (two goals on 20 shots), which marked the fourth time in seven starts he’d been below .910.

The Rangers need Shesterkin to play with swagger. They need more consistency. Just as with Kreider, the weekend was a good start.

I was going to point out how the Rangers need to get more production from their third line when, lo and behold, a cursory bit of research revealed that the three players now comprising the third line — Jimmy Vesey, Barclay Goodrow and Julien Gauthier — have accounted for as many goals at five-on-five as first-liners Kreider, Zibanejad and Kaapo Kakko.

That would be three.

Somewhat mystifyingly, Zibanejad does not have a five-on-five goal among his six total goals, of which five came on the power play and one while shorthanded. Kreider has one. Kakko has two. Meanwhile, Goodrow has two and Gauthier one. Vesey? Not yet.

As with Kreider on the power play, the first line’s analytics are off the charts. Last year, when Nos. 20 and 93 were on the ice together at five-on-five, their line produced, per 60 minutes, 52.95 attempts, 30.16 shots, 26.32 scoring chances and 12.39 high-danger chances. Their unit had an expected goal rate of 2.53 per 60:00 while exceeding that number by scoring 2.97 goals per (all numbers courtesy of Natural Stat Trick).

Last season’s shooting percentage was 9.86. This season, it is 3.95. So, is the Zibanejad-Kreider connection regressing to the mean, or should we anticipate an explosion?

The Rangers need the answer to be the latter.